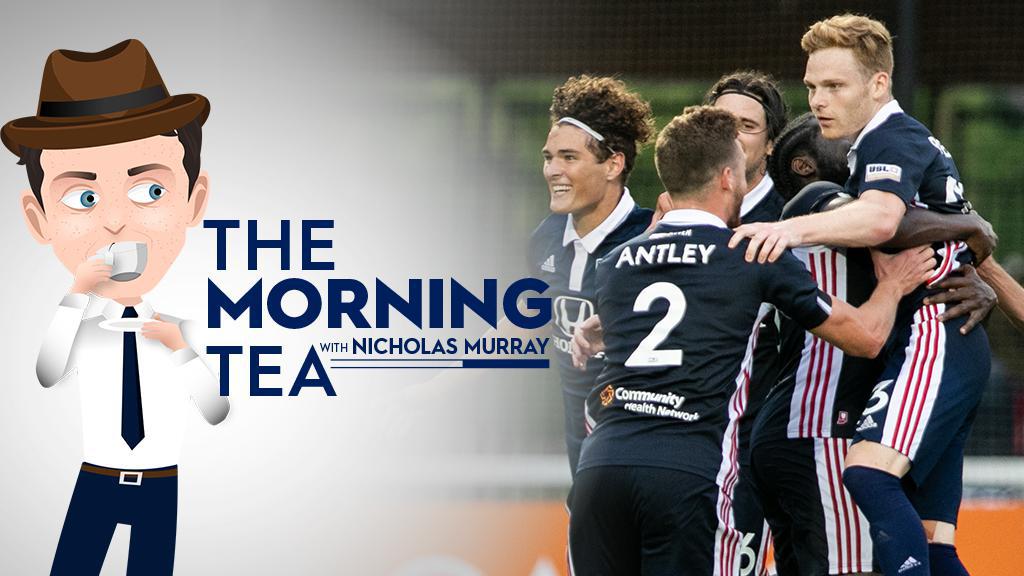 Summing up one of the moments of the season from the Championship’s early favorite for the Golden Boot and a presumptive MVP candidate. Here’s your Morning Tea for Thursday.

The morning after, it still seems surreal.

In a strange season, we’ve already seen some transcendent moments this USL Championship campaign, but what Tyler Pasher pulled off on Wednesday night to send his side to victory against Pittsburgh Riverhounds SC is worth watching over, and over, and over.

And yet, are we surprised?

After the past 12 months the Canadian has had, I’m not sure you can be. It’s not like he didn’t do something like this already this season against Memphis 901 FC, albeit with a slightly smaller flourish as he found the back of the net past U.S. Soccer legend Tim Howard in the opening weekend of the season.

The determination and the precision that Pasher is playing with for an Indy side that has gotten out to one of the best starts in the Championship’s history is simply breathtaking to watch.

“Those are the moments that are just really, really fun to be a part of,” said Eleven Head Coach Martin Rennie on Wednesday night. “When you are on a team or part of a staff and you see a goal that, in that minute, against obviously a very good team, it’s probably a highlight moment for Indy Eleven as a franchise. Tyler’s got the ability to do that, so it’s great to see him come through.”

The early frontrunner for both the Golden Boot and Most Valuable Player award, Pasher now has five goals in the club’s first four games. That’s not an unprecedented feat in the Championship. In fact, each of the past three seasons there’s been a player that’s accomplished that, with Kharlton Belmar soaring even higher with seven goals in his first five games for Sporting Kansas City II in 2018.

But what none of Belmar, Djiby Fall (2017) or Luca Lobo (2019) did – nor Joseph Ngwenya, who also bagged five goals in four games in 2013 – was score in every game of their first four. That’s remarkable, and about as good a testament to how consistent Pasher has been.

Some games this season he’s had close to double-digit chances to find the net. On Wednesday, the Hounds did about as good a job as you could on him, giving him only one clear look on goal before second half stoppage time.

But as we’re finding out very quickly, if he finds an opening, it just might be all Pasher needs to make every Indy fan’s night.

When I was a kid I thought @LFC would keep on winning for ever. Enjoy every moment as you never know when the next title may be. pic.twitter.com/yBV2YLDrH7

Category is: Sports Teams Who Support LGBTQ Equality Eleganzaaa! And @jessetyler is WINNING! @NewMexicoUTD is supporting our community with a limited edition TTK bow tie! See link in bio to get yours now! https://t.co/DoPnrkuNa0 pic.twitter.com/FG6k2S7bEB

- OKC Energy FC escaped with a draw against Rio Grande Valley FC at Taft Stadium on Wednesday night, as a late goal from Frank Lopez evened the match up at 1-1. Derek Parker of The Oklahoman was on hand at Taft Stadium.

- We might be able to breathe a little more easily about the New York Red Bulls II this morning. A five-goal display that saw every goal notched by a different player got the side into the win column for the first time this season ahead of a big game this weekend against Pittsburgh Riverhounds SC.

- The United Soccer League has struck a new partnership with Synchronicity, the highest quality, full-spectrum hemp oil plant-to-body products on the market. Synchronicity's assets within the agreement will include in-stadium LED signage and national broadcast exposure.

- Both of Austin Bold FC's games this week, including Thursday night's game against FC Tulsa, were postponed on Wednesday night following a positive COVID-19 test in Bold FC's squad. A rescheduled date for that game, and Sunday's contest against Colorado Springs Switchbacks FC, will be announced at a future date.

- Thursday night’s other scheduled game between Tacoma Defiance and Reno 1868 FC was also postponed on Wednesday after a covered person in the Reno 1868 FC organization tested positive for COVID-19 as part of weekly routine testing. The teams are next scheduled to meet on August 8 at Greater Nevada Field.

- Birmingham Legion FC’s Bruno Lapa and Brian Wright have got off to a flying start alongside each other in the Championship. My colleague Cameron Koubek caught up with the duo, both of whom came through USL League Two on the way to the professional ranks.

- Tampa Bay Rowdies defender Mustapha Dumbuya is separated from his girlfriend and two young daughers in England due to the COVID-19 pandemic, but is working to make the best of it. "I’m a positive person," he told reporters on Wednesday. "My girlfriend, she always says ‘Look they’re doing fine. Just do what you have to do.'  I’ll see them in a few months. I just want to win this championship and I’ll see my kids when I get home."

- Unable to return to his home country of Chile during the quarantine during COVID-19, Austin Bold FC’s Jorge Troncoso instead headed to Southern California with teammate Josue Soto and saw out the quarantine with his family. Bold FC’s Michael Cerna caught up with the two players to talk about the experience.

- One week into the Championship’s return, Phoenix Rising FC continues to show off its pedigree as the title favorite. The Arizona Republic’s Briar Napier has more on a positive return to action from Head Coach Rick Schantz’s side.

- After conceding goals late in the first half against both Colorado Springs Switchbacks FC and El Paso Locomotive FC in its first games back in action, New Mexico United is looking to close out halves more strongly as it prepares for Friday night's rematch with Locomotive FC at Southwest University Park.