MURRAY: The Five Most Significant Games in Championship History 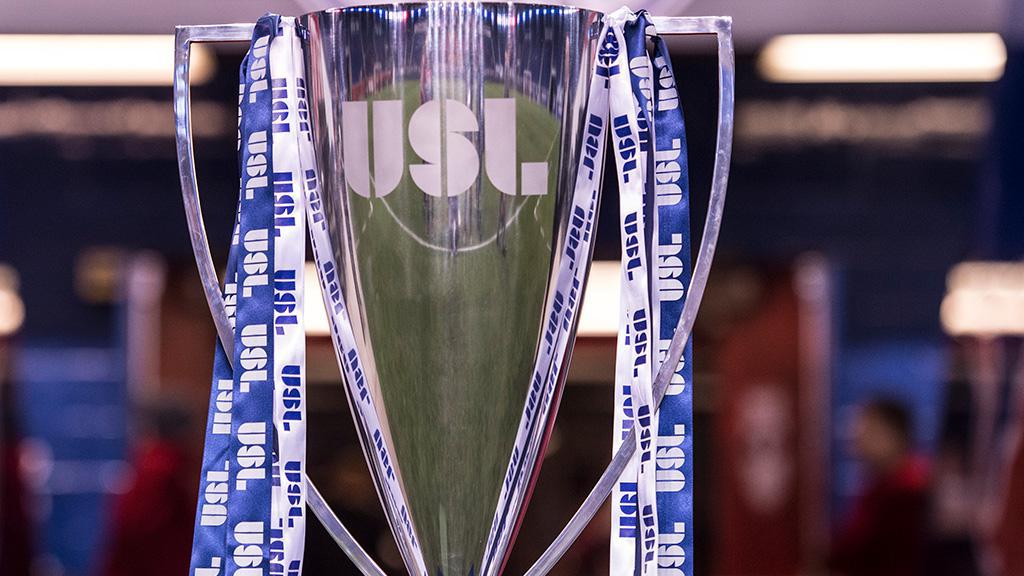 When Tacoma Defiance played host to San Diego Loyal SC at Cheney Stadium on Wednesday, March 11 it marked the 3,110th game in the USL Championship’s history.

Clearly, we’ve come a very long way from the start of the 2011 season, where all this began. But along the way there have been some key games that, in their own way, have told the story of the league and its growth on and off the field.

To be certain, this isn’t a collection of games where you’ll find games like the Miracle on the Mon, rivalries like the River Cities Cup or the Silver State Cup, or any of the other great games the league has witnessed over the years.

Instead, these are the five games that served as landmark moments in the Championship becoming the league it is today. 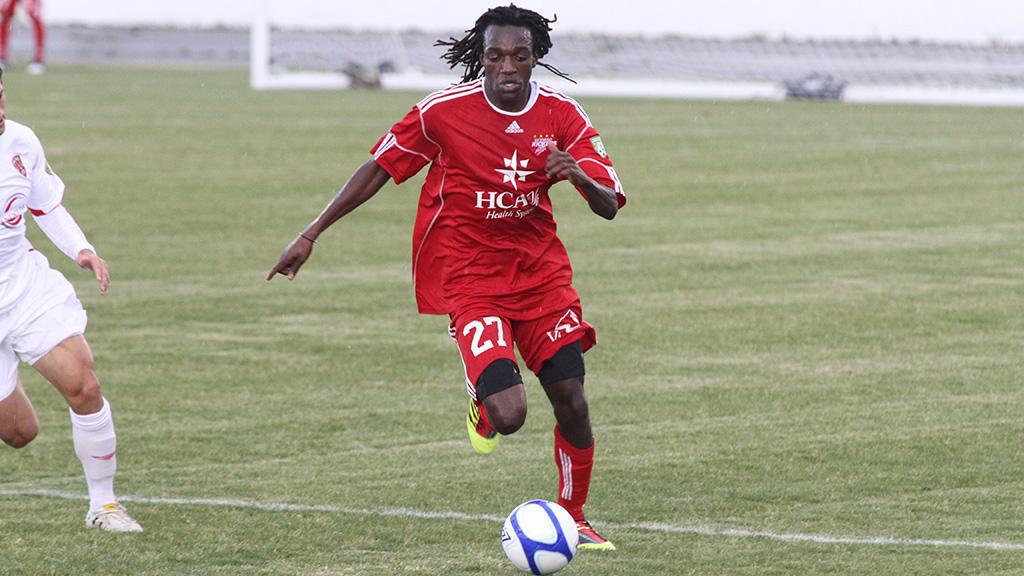 Stanley Nyazamba of the Richmond Kickers scored the first goal in the Championship's history, leading his side past Orlando City SC at City Stadium. | Photo courtesy Richmond Kickers

We’ve all got to start somewhere, right? And fortunately for the USL Championship, the first official game in its history was very much a harbinger for what was to come in the league’s early years.

There was just one problem; unless you were at City Stadium that day, you didn’t get to see it live.

Yep, back in the Championship’s inaugural season teams weren’t required to stream their home games if they didn’t want to. That quickly changed in the 2012 season. But, that meant access to the first game in the Championship was limited to live updates on Twitter and the league’s Demosphere website.

So, when Richmond’s Stanley Nyazamba scored the first goal in league history six minutes before halftime, or Matthew Delicate notched a late insurance goal to put the game away, they were lost to the mists of time.

The game itself, however, set the stage for what would be a very good rivalry over the first four years of the Championship’s history. Orlando held the upper hand when it came to silverware, but Richmond denied them a third consecutive regular season title in 2013, defeating Orlando again at City Stadium in what was effectively a late-season title decider.

Unfortunately, a dramatic run by the Charlotte Eagles meant we didn’t get a rematch in the 2013 USL Championship Final, but that opening game in 2011 set the stage for what was to follow. 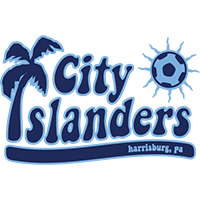 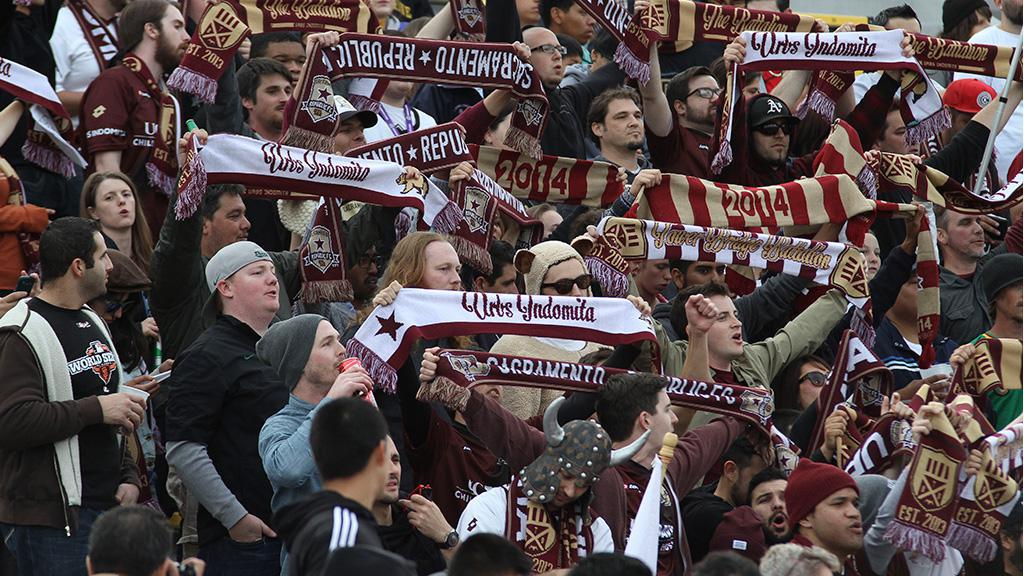 The first thing to do here is ignore the score, because that wasn’t really what was important about this game.

What was? That Sacramento Republic FC announced its arrival in the Championship with the first regular season crowd that exceeded 20,000 fans as they packed out Hughes Stadium for its contest with the City Islanders.

Coming a few months after Orlando City SC had hosted 20,886 fans at the Florida Citrus Bowl for the 2013 USL Championship Final, Sacramento’s crowd of 20,231 not only brought a spotlight to the club’s big goals, but it also marked a change that everyone else in the Championship and beyond could learn from.

The crowd, and everything that surrounded it, lay in the message. Founded in December 2012, Republic FC didn’t sell itself primarily as a soccer club, but as something bigger. The vision of leaders like now-President of San Diego Loyal SC Warren Smith, Joe Wagoner, Erika Bjork and others changed the mindset for established Championship clubs and provided a blueprint for those that followed them.

Nowadays, you can see it in the way clubs like New Mexico United, Birmingham Legion FC, Las Vegas Lights FC and San Antonio FC have landed in their communities, the impact they have had since their arrival, and the returns they’ve seen at the box office. Some clubs have even exceeded the heights Republic FC reached in those opening four games before Papa Murphy’s Park – then known as Bonney Field – opened midway through the 2014 season.

Here’s where you remind me that attendance isn’t everything, and you’re right. Republic FC has backed it up with results on the field, reaching the playoffs in every season of its existence. But that night in 2014 gave everyone associated with the Championship – present and future – a vision for what the league could and should be.

(And Sacramento got its revenge on the City Islanders for spoiling the party later that year in the Championship Final, claiming the trophy after a 2-0 win.) 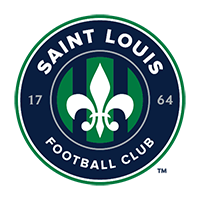 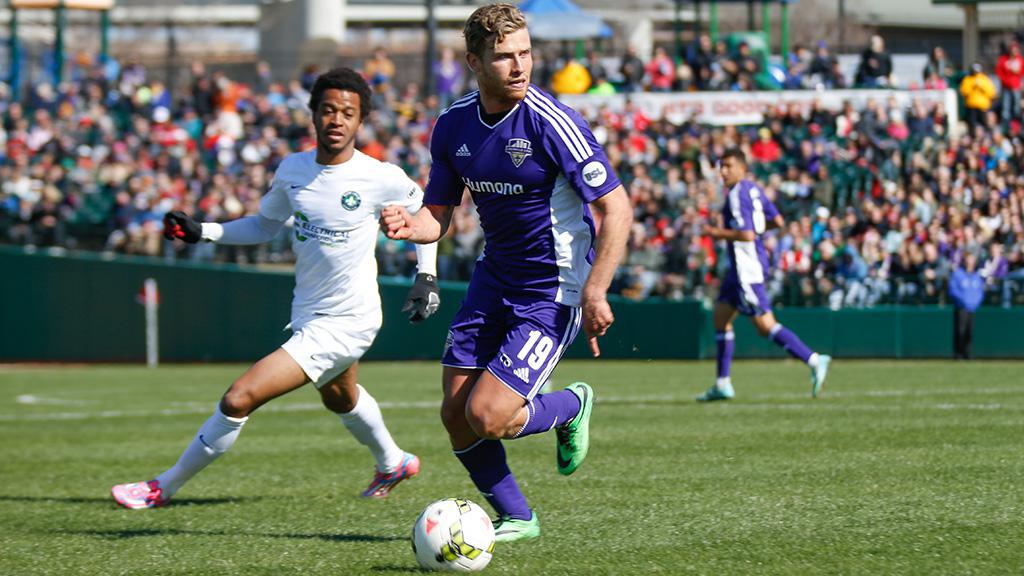 Making their debuts in the 2015 Championship season, it was only appropriate that Louisville City FC and Saint Louis FC play their first official games against one another. | Photo courtesy Em-Dash Photography / Louisville City FC

If the year prior had offered a look at what the future could hold for new USL Championship clubs, 2015 provided the first glance at the league’s overall future.

First, the league had gone from 14 teams in a single-table format to 24 teams across two conferences between the end of the 2014 season and the start of 2015. That meant there were not only numerous teams following in the footsteps of the LA Galaxy II as MLS owned-and-operated clubs, but also a healthy collection of new arrivals bringing professional soccer to new markets.

So, it was only appropriate that when the schedule was announced, two of those newcomers – Louisville City FC and Saint Louis FC – would square off for the opening game of their respective histories in a new rivalry that would be dubbed the Kings’ Cup.

LouCity took victory thanks to goals by Magnus Rasmussen and Charlie Adams and went on to reach the Eastern Conference Final in the 2015 USL Championship Playoffs. They weren’t alone, either, with the New York Red Bulls II, Colorado Springs Switchbacks FC and Tacoma Defiance all making the postseason at the first attempt as well. LouCity and the Red Bulls II have become perennial playoff contenders, too – and USL Championship Final title-winners.

Since then, the Championship has continued to grow, fulfilling the original vision of a national league with a regionalized competition model. Because of this, there is now professional soccer in states like Alabama, Connecticut, Nevada, New Mexico, and Tennessee, with USL League One doing the same for Madison and Nebraska.

The 2015 season – and teams like LouCity and STLFC – are a major reason why. 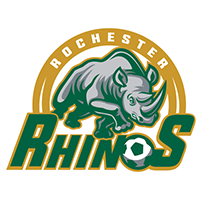 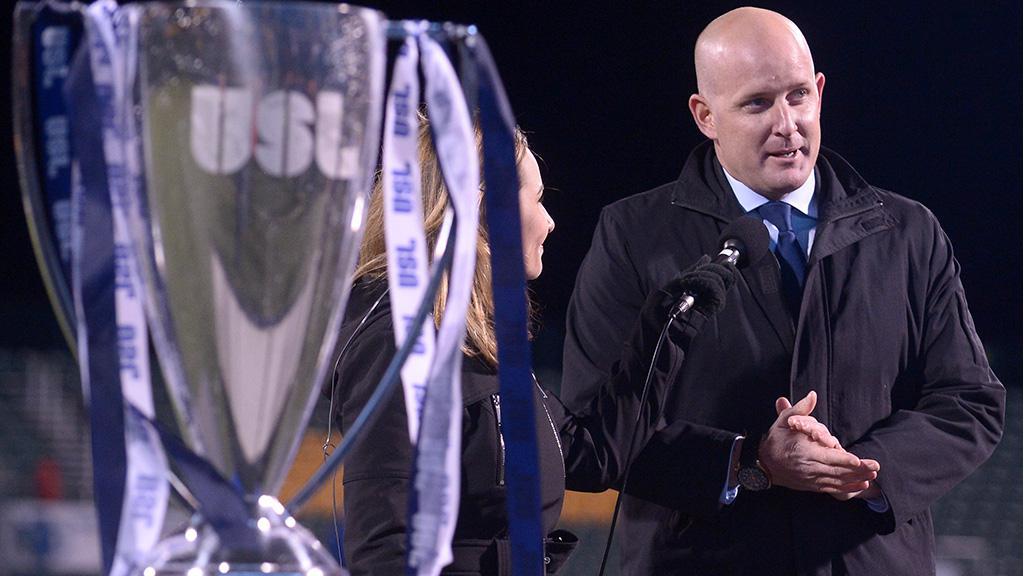 USL President Jake Edwards is interviewed prior to the trophy presentation at the 2015 USL Championship Final, the first to be aired on an ESPN network. | Photo courtesy Rochester Rhinos

This is the first title game in our selections, and it is here for two reasons. First, it marked the first time – but certainly not the last – an MLS owned-and-operated side reached the final as the LA Galaxy II claimed the Western Conference title.

Second, and maybe more importantly, it marked the first night in the ongoing media relationship between the USL and ESPN.

Let’s talk about the first one for a moment. Los Dos were excellent when they joined the league and were only denied hosting the USL Championship Final in their first season in 2014 by Sacramento Republic FC and Rodrigo Lopez’s Miracle at Bonney in the Semifinals. The next year they broke through as the No. 5 seed in the West, becoming the first of four teams operated by MLS clubs to reach the Championship Final. When you consider only three independent teams – the Rochester Rhinos, Louisville City FC and Phoenix Rising FC – have advanced that far over the same span, it shows how competitive those clubs can be.

But the biggest takeaway from that night was that, finally, the game was being aired by the Worldwide Leader in Sports. USL Productions had been created, Mike Watts and John Harkes had the call, fans that tuned into ESPN3 were treated to a game that went into extra time before Asani Samuels gave the Rhinos victory, and a media friendship was born.

The following year, regular-season Championship games aired on ESPN3 for the first time. Then in 2017, two regular season games and the USL Championship Final made it to over-the-air network airspace. In 2018 when ESPN+ was unveiled, the Championship was one of the first offerings available, and then last year the USL and ESPN struck a three-year agreement to keep the Championship and League One on ESPN, expanding its network presence across English- and Spanish-language audiences while maintaining access to games on ESPN+, which now reaches more than 7.9 million subscribers.

The visibility USL’s media agreement with ESPN has given the league has been key to its growth.

It began that night in upstate New York. 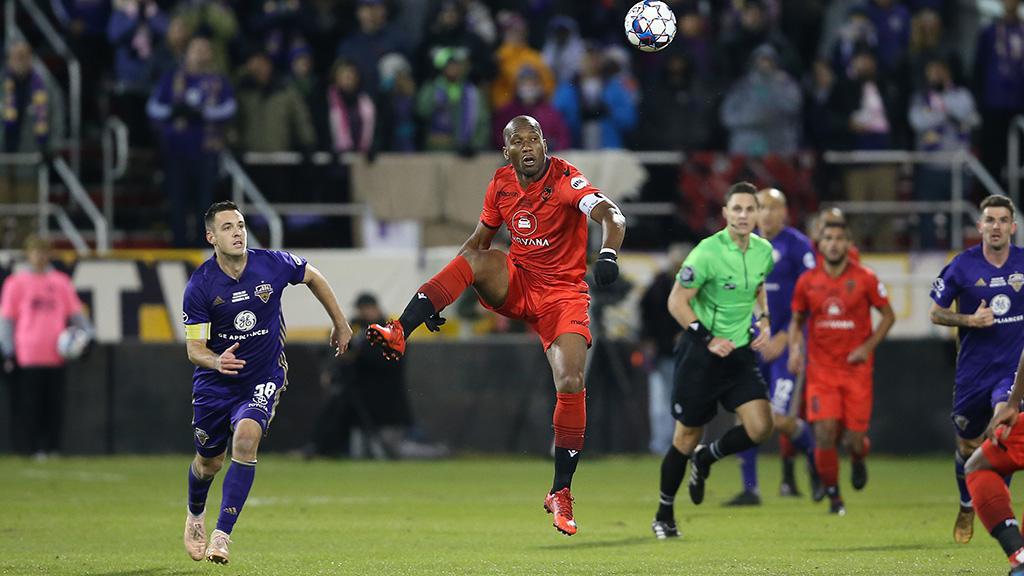 When the announcement of his signing came down on April 12, 2017, the hope was always that it would result in this.

Didier Drogba and Phoenix Rising FC playing in the USL Championship Final on national television in the Cote D’Ivoire legend’s final game as a player.

The media attention was unprecedented. Grant Wahl profiled Drogba for Sports Illustrated, among other feature stories in the build-up to the game. On top of that, for the first time the Championship’s finale would be aired on ESPN2.

The Championship had featured notable overseas players before. Before Drogba arrived in Phoenix, there were Omar Bravo and Shaun Wright-Phillips. When the Tampa Bay Rowdies joined the league in 2017, they did so with Joe Cole and Marcel Schäfer leading the way.

But no-one – not even Cole – had the charisma or the resume that Drogba did.

And on the field, he delivered. Beyond the spectacular goals over two regular seasons, Drogba was the first player to score a playoff goal in Phoenix’s history in the 2017 postseason. Then the following year, he was in the middle of Rising FC’s run to the Western Conference crown, recording three goals and one assist.

The Championship Final, unfortunately for Rising FC fans, proved another story. Going up against a Louisville City FC side that was playing for its own piece of history as the first side to claim the title in back-to-back seasons, Phoenix was held scoreless in front of a packed house at Lynn Stadium that included numerous devoted traveling supporters.

Luke Spencer’s goal for LouCity proved the difference, spoiling the final bow for one of the game’s legends.

Just as David Beckham’s arrival in Major League Soccer proved a turning point, so did Drogba competing in the Championship. More and more players and media from overseas are aware of the league because of his presence, and many more of them are now arriving in the league, bringing with them international experience for their countries.

He was a game-changer then, meaning this game’s legacy will continue on well into the future.