Sometimes, a club finds the chemistry it needs to hit the ground running from the outset of its inaugural season. Between 2014 and 2017, an expansion side finished in the top three of the standings each year, whether Sacramento Republic FC in the league’s single-table format in 2014 or others in their respective conferences since.

But for other clubs the learning curve can be steeper, making the second season the one in which the breakthrough arrives.

That’s been the case for Fresno FC, which on Saturday night surpassed its point total from its inaugural season with a 2-1 victory against Las Vegas Lights FC at Chukchansi Park to remain in third place in the Western Conference with 13 games to go in its campaign.

A pair of goals by Jaime Chavez – one of the new recruits brought in this offseason to bolster the club’s first-year scoring issues – proved the difference against Las Vegas and kept Head Coach Adam Smith’s club on a path to a potential second-place finish by the end of the season. While Reno 1868 FC has a four-point edge on the Foxes, Fresno has two games in hand that could allow them to vault into a favorable position.

Should the Foxes do so, they’d be following in the footsteps of two notable predecessors that missed the playoffs in their first year and became serious contenders the next in OKC Energy FC and San Antonio FC. Energy FC went from 10th in the league in its inaugural season in 2014 to second place in the Western Conference a year later, while SAFC made the same jump in the Western Conference between 2016 and 2017.

With a trip to the postseason almost a certainty at this point, the Foxes will be one of the challengers to Western Conference leader Phoenix Rising FC’s bid for its first league title at the end of the season, having lost only three times in the regular season. The two teams played to a scoreless draw at Casino Arizona Field early this season and are set to meet at Chukchanski Park on September 21 in what is one of the highlight games down the home stretch.

After coming this far in a year, though, the Foxes look ready to remain a contender beyond the end of this season.

1. If Fresno is going to contend in the postseason, it’s going to have to do without influential midfielder Arun Basuljevic after he suffered a broken left fibula that was repaired at the Community Regional Medical Center late on Saturday night. It’s a terrible blow for Basuljevic individually, as he had started to come into his own during the Foxes’ recent five-game winning streak recording eight key passes, eight shots and an 83.5 passing accuracy rate over that span.

2. “My heart goes out to Arun with the injury,” said Foxes Head Coach Adam Smith. “We talked to the guys about it in the locker room and will try to turn this into a positive. We are going to do whatever we can to try to win every game from here on out for him.”

3. For a moment, it looked as though both Fresno and Reno 1868 FC might have a chance at gaining ground on Phoenix Rising FC on Saturday night after the LA Galaxy II took a two-goal lead on their visitors at Dignity Health Sports Park early in the second half. As soon as a loose pass by Los Dos’ Ernesto Walker allowed Solomon Asante to pull a goal back with more than half-an-hour to go, though, there was a sense of the inevitable that Rising FC would find a way to pull through and pick up the victory.

4. Everything seemed to go Phoenix’s way from that moment, including a crucial spell that saw the Galaxy II’s Augustine Williams spurn a golden opportunity to restore his side’s two-goal advantage on a breakaway with 18 minutes to go and two minutes later Junior Flemmings pulled the visitors level on a well-executed move. When Joey Calistri’s finish put Rising FC ahead in the 83rd minute, it was game over as the Galaxy II didn’t register another shot.

5. “When we made the error in the buildup and they got the first goal, I could see the guys get a little bit worried and a little bit rattled from a mental standpoint,” said Los Dos Head Coach Junior Gonzalez, whose side experienced the same as many others have over the course of Rising FC’s 12-game winning streak. Phoenix’s relentlessness has simply overpowered opponents at times, all the more so when they’ve shown nervousness as to what might be about to be inflicted on them next. It’s going to take a confident, resilient side to break up the current run of Head Coach Rick Schantz’s squad. 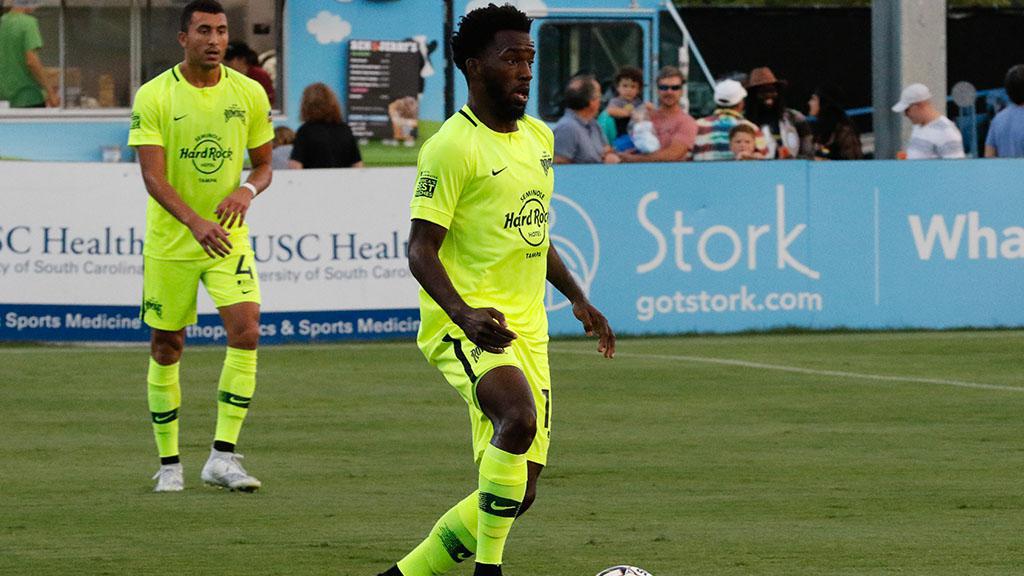 Tampa Bay's Malik Johnson had a goal and assist as the Rowdies inflicted the Charleston Battery their heaviest home defeat in the Championship on Saturday night. | Photo courtesy Pattie Anderson / Charleston Battery

6. By contrast, the Eastern Conference-leading Tampa Bay Rowdies had remarkably little trouble in dismissing the Charleston Battery in a club-record seventh road win of the season after Lucky Mkosana’s two goals in the opening four minutes paved the way to a 5-0 win that kept the side just ahead of the New York Red Bulls II after New York’s 2-0 win against Saint Louis FC on Friday night.

7. The loss was the first time the Battery had conceded five goals at home in the club’s Championship history and was compounded by the sending off of standout forward Ataulla Guerra in the first half for two yellow cards. After a month in which the Battery suffered through all manner of postponements that saw them play only one league game, nothing seemed to go right for the hosts.

8. “It's just one of those nights,” said Battery Head Coach Mike Anhaeuser as his side suffered its first home loss of the season. “Everything starts to get in your head and it starts to fluster you. I think we did some really nice things with our possession and our movement but it's never going to show because of the final result.”

9. Charleston is still a solid pick to reach the postseason despite the loss – all of the sides below it that could be considered in serious playoff contention failed to take victory over the weekend – but the side is going to face the challenge of playing 15 games over the final 11 weeks of the campaign. For a club that has a smaller roster, there’s going to be a serious balancing act for Anhaeuser to manage as he goes after results while making sure players remain as close to full strength as possible.

10. Another game, another late winner for Indy Eleven, but this time a new face to provide it. After a frustrating, injury-hit season, Ilija Ilic’s 87th-minute winner against North Carolina FC only added to the success the Eleven have found this year as previously detailed by my colleague John Arlia.

11. “Really happy for him,” said Indy Head Coach Martin Rennie, who observed the game from a suite as he served his one-game touchline suspension incurred against Nashville the previous week. “We’ve missed him a lot, and I don’t know if people fully realize it, but we certainly do. We saw how good he was last season for one of our competitors and how good he was against us, so it was really nice to see him doing that for us. It should be a big lift for him. He’s been through a lot, coming to a new club and not being fully able to show what he can do yet, but I think he started to tonight and our fans should be really happy about that.”

12. As impressive as the Eleven have been in finding ways to win games and stay in touch with the Rowdies and Red Bulls II at the top of the standings, on Saturday night it was the resilience of their defense that really stood out. NCFC piled on 15 shots in the second half, including an unstoppable finish by Dre Fortune that leveled the score midway through, but through it all Indy was resolute and kept itself in with a chance. And, as we’ve seen numerous times this year, it’s becoming awfully good at taking those opportunities when they present themselves.

13. “The second half was much better in terms of pressure, getting around them and being a step ahead of them for most of the half,” said NCFC Head Coach Dave Sarachan. “We created enough chances. We get the goal and I think we could have had one or two more to be fair. I didn’t think they threatened a whole lot in the second half, but yet they made a play.” 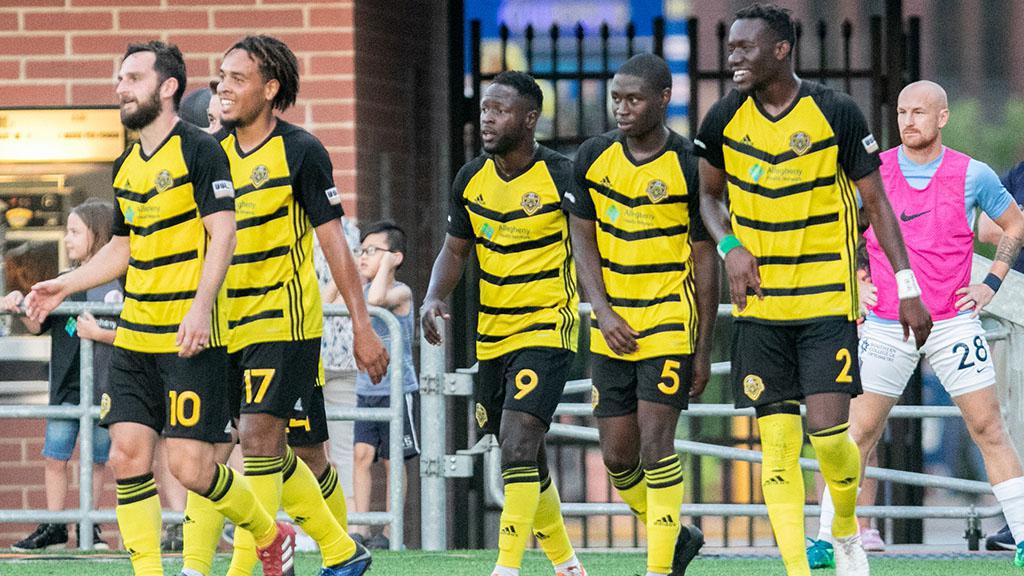 14. Throughout the first half of the season, we were waiting to see what Pittsburgh Riverhounds SC would be able to pull out of its bag as it made up the games in hand it had on the leading group. After taking a third consecutive victory on Saturday night, and putting up four goals against a second consecutive expansion side in Memphis 901 FC, the Hounds have all the makings of a dark horse for this postseason.

15. Pittsburgh outshot Memphis 23-4 and rattled off 11 shots on target, in addition to a powerful blast by Steevan Dos Santos that rattled the crossbar moments before Robbie Mertz’s goal just before halftime. Mertz’s goal, coming off a wicked deflection that left Memphis goalkeeper Jeff Caldwell utterly helpless, was the sort that arrives for teams that are making their own luck and goes against those that just can’t seem to catch a break, which definitely feels like the case for 901 FC right now.

16. “It was good work from the team, from all the boys,” said Hounds midfielder Kenardo Forbes, who had two assists in the contest. “We played together as a team today. Maybe it's our first perfect game. We got some goals and then we defended our goal. That's a good sign in the backend of the season. Last year, at this point we kind of shut down. I think it's a good sign for us this season. We're peaking at the right time. It's good for the team.” 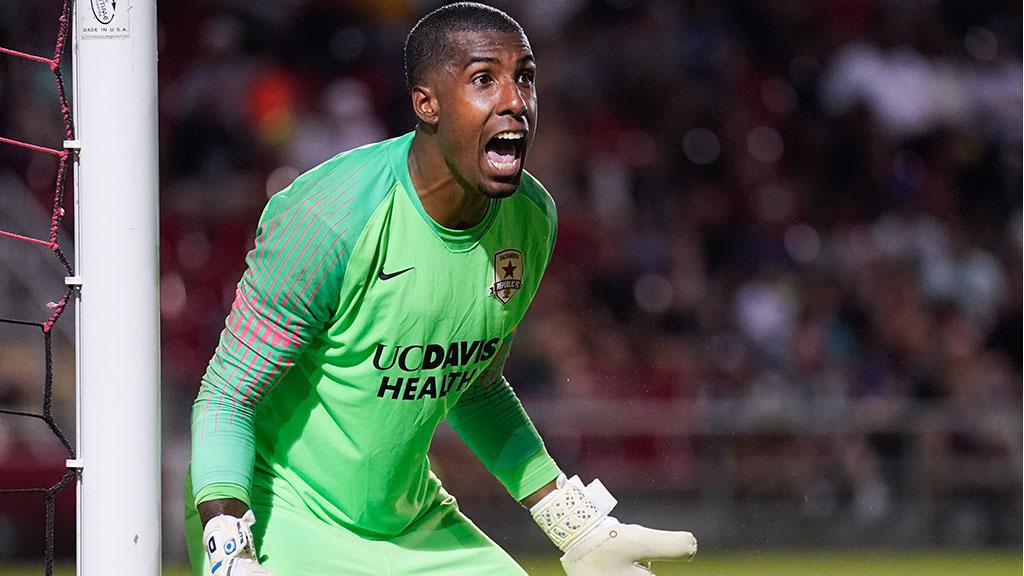 Sacramento Republic FC goalkeeper Rafael Diaz made seven saves on Saturday night as his side put in a Jeckyll and Hyde performance in San Antonio, but held on for a crucial victory. | Photo courtesy Darren Abate / San Antonio FC

17. Given the club’s up-and-down form throughout the season, we were wondering which version of Sacramento Republic FC would show up to Toyota Field on Saturday night to take on a hot San Antonio FC side. As it turned out, both of them did. Republic FC was superb in the first half, getting into good positions and capitalizing on its chances to the tune of two goals for Stefano Bonomo and one for Cameron Iwasa and a three-goal halftime lead. Then the other version came out for the second half and almost gave it all away as SAFC rained down 18 shots, nine of which landed on target.

18. If not for a fine display by Sacramento goalkeeper Rafael Diaz, the 3-2 victory for Republic FC could easily have gone another way, and the seven-save performance in his first win for the club should boost the confidence of the former Red Bulls II shot-stopper. But Republic FC is going to need to figure out how to produce the performance it put out in the first half if it’s going to fulfill the potential its squad on paper possesses. A win at Papa Murphy’s Park on Wednesday night against a Las Vegas Lights FC side that has lost eight of 10 road games this season could put Sacramento into the top four at the end of the night. It wouldn’t be any big surprise, however, to see Sacramento sag again and remain in the middle of the playoff dogfight.