ARLIA: For Indy, It’s Not How You Start, It’s How You Finish 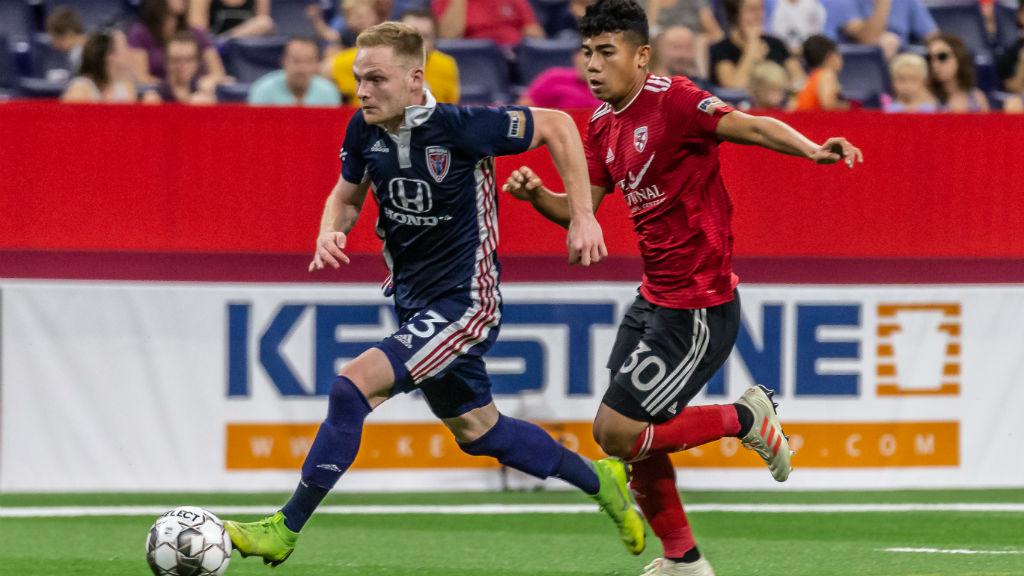 INDIANAPOLIS – As the clock at Lucas Oil Stadium ticked into the 80th minute on Saturday night, Indy Eleven found itself in a familiar position against Loudoun United FC.

The hosts were locked in a tie game, desperately searching for a winning goal.

Thomas Enevoldsen had come close to opening the scoring on a couple of occasions and Dane Kelly had just been denied on a one-on-one breakaway by Loudoun goalkeeper Earl Edwards Jr. minutes earlier after Tyler Pasher split the visiting defense with a wonderful through ball.

But with time starting to work against it, Indy did what it has done on a handful of occasions over the past two months. It broke through when it mattered most.

In the 81st minute, Kelly found Kenney Walker in the center of the park before swiftly sneaking in between a pair of United defenders for the return ball, which he quickly guided into the path of Enevoldsen for the forward to tap past Edwards Jr. with a sliding finish, sending the home crowd into a frenzy.

Instead of sitting back and absorbing pressure to hold onto its newfound advantage, the Eleven looked to kill the game off with a second goal that Pasher provided 10 minutes later. The Canadian midfielder, who has often been at the forefront of Indy’s late-game success this season, played a pass to Ayoze on the left and then darted downfield to retrieve the return ball over the top before coolly placing his shot between the legs of Edwards Jr. to secure another hard-fought three points.

“It was a good game for us, it was very tight until the end,” Indy Head Coach Martin Rennie said after the match. “We created some chances with Ayoze coming in from the right side and as the game went on, we moved Pasher in to create more chances in an attacking position. In the end, it helped us and gave us a bit more attacking power. We had to be patient and keep going, but that’s a good win for us. Every win is hard to get, and this was no different.”

Patience has been key to much of the Eleven’s success this season, as the club has scored 16 of its 28 goals in the second half of matches. Half of those, including both tallies on Saturday against Loudoun, have come in the 80th minute or later.

Perhaps even more important than scoring late is the significance of those strikes, as five of Indy’s eight goals beyond the 80th minute have been game-winners and two have come as insurance goals to secure three-point performances. Remarkably, each of those eight tallies has come since May 18, with Pasher’s 84th-minute match-winner against the Charleston Battery proving to be the first of three such strikes for the team’s top scorer.

While Rennie would most certainly rather be putting teams – especially ones outside of the playoff places like Loudoun – away a little bit earlier, he has to be pleased with the determination his side has shown over that stretch starting on May 18 to compile a 7-1-2 record and win five of those games in the final 10 minutes.

That run of form has kept the Eleven in touch with the Championship-leading Tampa Bay Rowdies, as Indy enters this week six points and two places behind Tampa Bay in the Eastern Conference standings but boasts two games in hand.

That’s quite the accomplishment for a team that hasn’t come close to living up to its attacking potential after adding the Championship’s all-time leading scorer in Kelly and a 2018 20-goal scorer in Enevoldsen to its squad this past offseason. The fact that those two forwards have combined to outscore Pasher (8) by a single goal to this point of the campaign will be worrying to Rennie, but it also shows that the sky’s the limit for the Eleven if the pair find their shooting boots over the second half of the season.

The integration of fellow offseason signing Ilija Ilic, who registered double-digit goals and assists for Louisville City FC in 2018, could certainly provide a boost as he starts to find his spot in the Indy lineup after missing most of the season with a lower body strain.

Rennie has been impressed with what he’s seen so far from the 28-year-old Serbian, who has made three appearances since his return from injury and started Saturday’s contest on the left of a forward three.

“I think he’s strong and played well,” said Rennie. “He’s very talented. He got into good spaces, played a great ball in the first minute, and it seemed like a great pass and run. He’s strong and holds it up well in the final third. I think as he gets more games, he’ll really help us.”

If the Indy attack, which has yet to score four goals in a game this season – a feat accomplished this month by bottom-five attacking sides Birmingham Legion FC and Memphis 901 FC, can raise its level over its final 16 games then it will be a favorite to lift some silverware come season’s end.

But for now, it's better late than never.