ARLIA: Why 14th-Placed Phoenix is Still the Favorite Out West

After a slow start, Rising FC heads into Game of the Week with newfound momentum 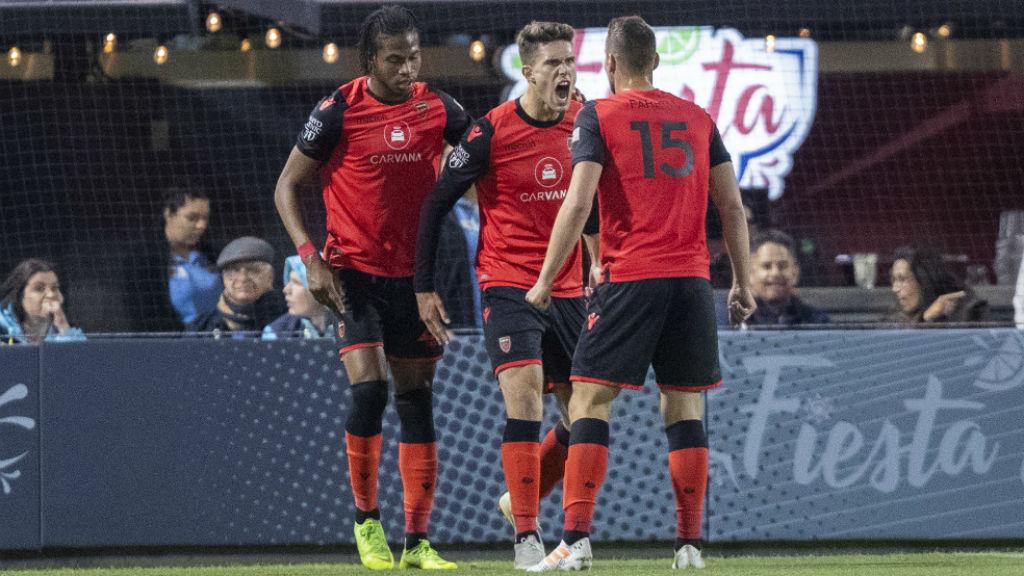 After falling to Louisville City FC at the final hurdle last season, Phoenix Rising FC had a short but busy offseason that produced a small-scale changing of the guard in the desert.

For starters, “King” Didier Drogba hung up his boots and rode into the Arizona sunset, while fellow forward and club stalwart Chris Cortez moved onto greener pastures in Thailand. Head Coach Rick Schantz saw his interim tag dropped after leading Rising FC to the USL Cup and his roster gained some attacking reinforcements in the form of Adam Jahn, Junior Flemmings, Joey Calistri and others.

While Solomon Asante and many other familiar faces from last year’s squad remained, it was perhaps unreasonable to think that things would click right away.

Instead of sprinting out of the gate, Rising FC settled for a light trot as it set a new a Championship record with four consecutive draws to start the season.

Luckily for Phoenix, its 34-game regular-season schedule isn’t a sprint. It’s a marathon, and there’s still plenty of time to track down the rest of the field.

Rising FC (1-0-4, 7pts) heads into Wednesday night’s Championship Game of the Week on ESPN against Austin Bold FC (1-2-1, 4pts) in 14th place in the Western Conference but should be full of confidence after picking up its first victory of the year in a dominant display at El Paso Locomotive FC this past Saturday.

What was more significant than the 2-0 win, however, was the fact that Phoenix got back to the style that saw it claim its first silverware in club history and give Louisville a run for its money just six short months ago.

For all the attacking options Schantz has at his disposal, the benchmark of Phoenix’s play has been a resolute back line that was protected by the defensive midfield duo of Kevon Lambert and Collin Fernandez. When Rising FC is secure at the back, it has shown a keen ability to absorb pressure and devastate its opponents on the counterattack.

However, over its opening three games, Phoenix’s defense proved to be nowhere near secure.

The club started the season with back-to-back 3-3 draws (the oddity of which I delved into here), before playing to a 2-2 tie against Colorado Springs Switchbacks FC. Conceding eight times in three games was surely a concern to Schantz, who must be somewhat relieved after seeing his side keep clean sheets in two consecutive contests.

The first of those matches, a 0-0 home draw against Fresno FC, was a step in the right direction but ultimately proved to be a disappointment given Phoenix’s man advantage for the final 50 minutes of play. But the second shutout at El Paso proved to me that Rising FC is getting back to its best, and an in-depth look at the match stats will explain why.

Let’s start with possession. Rising FC conceded 62.5 percent of possession to Locomotive FC, which marked the first time this season that the club didn’t hold the lion’s share of the ball. Though, as I said earlier, that plays to Phoenix’s strength of absorbing pressure and hitting opponents on the counter. And that’s exactly what it did.

Flemmings’ opening goal came from essentially nothing, as center back A.J. Cochran played a long diagonal ball towards the left winger and he was able to control and shoot into an empty net after Locomotive FC goalkeeper Logan Ketterer slipped at the worst possible time.

Phoenix doubled its advantage in the second half with a classic counterattack, as substitute Jason Johnson took the ball off an El Paso midfielder and spearheaded a quick flowing move that saw Ben Spencer tap home Asante’s low cross from close range.

Those two counterstrikes and a high-intensity performance on the defensive end, which saw Rising FC win more than 68 percent of its aerial duels and boast a 90.9 percent tackle success rate while limiting Locomotive FC to just one shot on target, was enough to finally get back in the win column.

The performance also mirrored those during Phoenix’s 2018 postseason run, in which the club maintained less than 45 percent possession in each of its four contests and was held under 35 percent in a pair of victories over the Swope Park Rangers and Orange County SC.

Now, the challenge for Schantz will be to find the right balance of attack and defense over the long haul.

Rising FC currently leads the league with 13.6 chances created per game, but also ranks in the bottom 10 in shots on target allowed per contest (5.2), even despite its recent improvement in that area.

It may not be as aesthetically pleasing, but if Phoenix can continue to focus its energy on the defensive end and make the most of its chances on the counter, then there’s no reason it shouldn’t be back on top of the table before long.

And there’s still plenty of time between now and October to set the right pace.