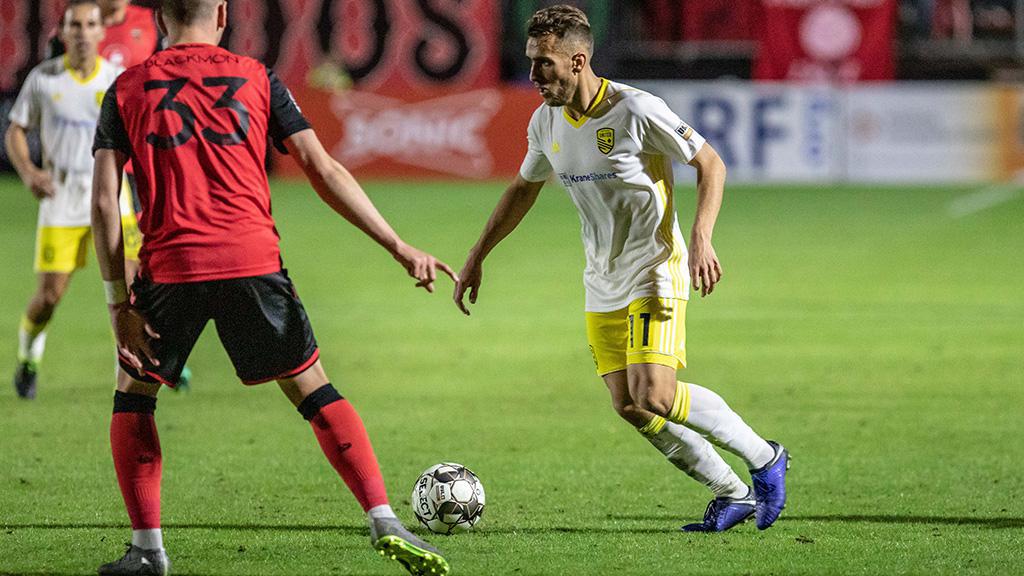 For those who decided to catch up on some sleep or started their St. Patrick’s Day celebrations a little early on Saturday night, I don’t blame you. However, it’s fair to say that you missed out.

Incredible scenes last night as @PHXRisingFC were greeted with a light show from supporters as they entered the stadium.

A club that continues to push the limits of what is possible in the @USLChampionship pic.twitter.com/f4owlfAhvs

While the sellout crowd of 6,607 fans provided the fireworks ahead of the 10:30 p.m. ET kickoff, it was the visitors that did so on the pitch throughout the highly-anticipated debut of the Four Corners Cup.

New Mexico forward Santi Moar opened his account for the club with a pair of stunning goals, curling an unstoppable strike past Phoenix goalkeeper Carl Woszczynski to give his side the lead in the 15th minute before breaking a 2-2 tie after halftime with a solo effort that saw the Spaniard carry the ball nearly 50 yards before dispatching it into the bottom-left corner. Kevaughn Frater also had one for the highlight reel in his first match against his former club, firing a left-footed drive past Woszczynski from 25 yards out.

For all the quality in its attack, however, New Mexico came away with just a point as Rising FC showed its resolve by battling back three times to earn a 3-3 draw for the second straight week.

While I could go on about Phoenix’s fighting spirit (or sloppy defending) over the opening two weeks, I’d prefer to point out just how wild these back-to-back results are. There were only eight 3-3 draws in the Championship during the 2018 season and just one – Las Vegas Lights FC’s Silver State Cup comeback against Reno 1868 FC in September – saw a team equalize on three separate occasions.

To do that twice in the span of eight days is crazy, but the fact Phoenix basically used the exact same formula against New Mexico as it did in San Antonio is even weirder. Solomon Asante scored from the penalty spot twice – after netting once from 12 yards last weekend – and Jason Johnson was Rick Schantz’s ace in the hole once again, coming off the bench to deliver Rising FC’s third goal late on.

With all the goals and late drama, Phoenix, for me, is the most fun to team to watch in the league at the moment.

While Rising FC was busy recreating a carbon copy of its Week 1 comeback, its 2018 Western Conference Final opponent, Orange County SC, was living out the exact opposite of its opening-week performance at Championship Soccer Stadium at OC Great Park.

After fighting back from two goals down to earn a draw in Reno last weekend, OCSC jumped out to a two-goal advantage in the opening half of its home opener against Tulsa Roughnecks FC. But, moments after Aodhan Quinn gave his side that lead with a penalty kick in first-half stoppage time, things started to fall apart for last season’s Western Conference table-toppers.

The Roughnecks responded before the break as Cristhian Altamirano converted a penalty of his own to give Tulsa some momentum and Janú Silva capitalized on an error by OCSC goalkeeper Carlos Lopez to level the contest in the 54th minute. Tulsa then delivered a decisive blow in a six-minute span that saw defender Luca Lobo bag a quick-fire brace from a pair of set pieces and substitute Fabián Bastidas send the visitors riding off into the California sunset with a tidy finish to a fast-break opportunity.

There was plenty to like on the night from Tulsa, from the team spirit to the offensive output, which saw the side record more than 13 percent of its offensive output from 2018 (36 goals) in just one outing. As Nicholas Murray notes in this week’s 18, the side’s 5-3 victory over Orange County was also its first win away from ONEOK Field since September 2017 and its first-five goal showing since August 2015.

That should give Head Coach Michael Nsien’s side a lot of confidence heading into a difficult mid-week showdown against…none other than New Mexico United on Wednesday night.

Clear your schedules, you won’t want to miss it.