Dacres on song as STLFC defeats Memphis; Louisville ends all square, Rowdies pull away in win 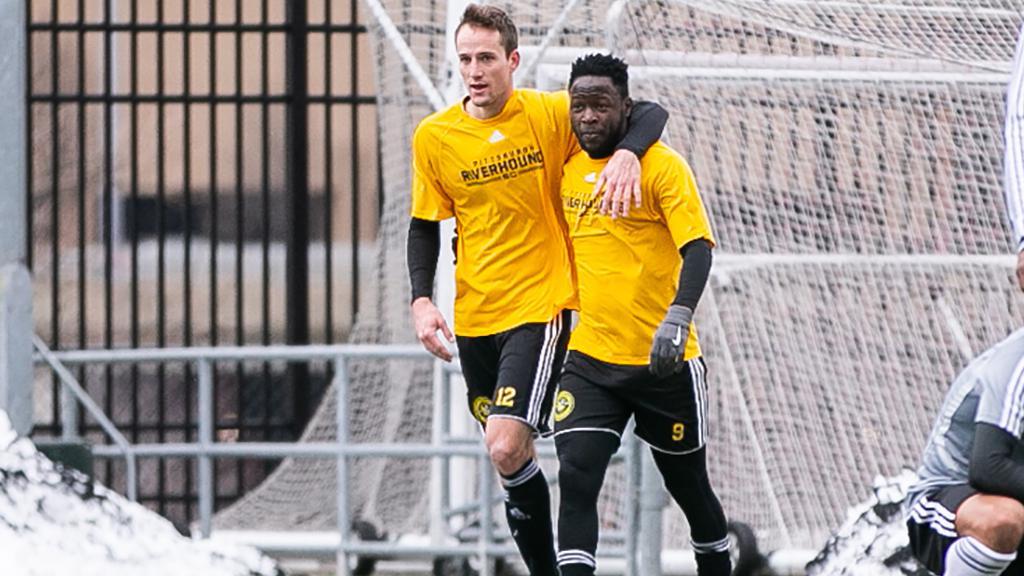 PITTSBURGH – Christian Volesky scored late in the first half as Pittsburgh Riverhounds SC defeated Bethlehem Steel FC 1-0 on Sunday afternoon at Highmark Stadium. The preseason clash marked the first meeting between the clubs since the 2018 USL Cup Playoffs that saw Steel FC advance in a penalty shootout as the Keystone State rivals renewed acquaintances.

“I thought the two halves in Pitt we played good soccer. Today, I wasn’t thrilled with the first half,” said Hounds Head Coach Bob Lilley. “Today, the second half was good. I do feel like we’re making strides. We still have a lot of work to do.”

Pittsburgh had the better of the early chances as Kenardo Forbes sent a shot just wide in the fifth minute later, and then saw a header miss the target off a corner kick six minutes later. Bethlehem had a chance later in the half fly high, but a minute before the halftime break Volesky met Neco Brett’s cross on the volley for a finish to the bottom-right corner of the net.

Neither side produced much threat in the second half as Hounds goalkeepers Ben Lundgaard and Kyle Morton combined to record a shutout, Pittsburgh’s fourth in five preseason outings so far.

SAINT LOUIS FC 3, MEMPHIS 901 FC 0: Kadeem Dacres struck in either half to lead Saint Louis FC to victory against Memphis 901 FC in a preseason clash at Toyota Stadium – Saint Louis to complete a perfect weekend of action for the hosts. STLFC had earned a 3-1 win against Tulsa Roughnecks FC in its previous scrimmage on Saturday afternoon.

Saint Louis took the lead in the 23rd minute when Dacres collected the ball on the right side of the box and hit a left-footed curler into the far post. The hosts doubled the advantage four minutes later as Dacres found Kyle Greig charging in to the near post from a corner kick situation and his header looped over the goalkeeper.

Memphis showed more aggressiveness in the second half but was unable to cut into Saint Louis’ lead, and with 11 minutes to go Dacres added his second of the game when he headed home a cross by STLFC Academy product Nichi Vlastos. Greig had one final chance to add a fourth with three minutes to go but Memphis goalkeeper Scott Levene stood firm to deny the veteran forward.

LOUISVILLE CITY FC 1, UNIVERSITY OF KENTUCKY 1: Louisville City FC had numerous chances, but it took a late goal by Sunny Jane to earn the defending USL Cup champion a draw against the University of Kentucky on Sunday in Lexington.

Louisville threatened regularly throughout the first half as Brian Ownby and Luke Spencer played on the front foot to cause problems for Kentucky's back line. LouCity twice hit the crossbar in the first half, but it was the Wildcats that found the only goal of the half as Cole Guidon squeezed home a finish in the 38th minute.

The visitors continued to press throughout the second half, and with three minutes to go it paid off. Paco Craig collected a throw-in and found Jane with a pass, and the Lesotho international finished the chance to earn LouCity a draw.

TAMPA BAY ROWDIES 4, GEORGIA SOUTHERN UNIVERSITY 0: The Tampa Bay Rowdies took victory in their second game of the weekend in Georgia as Brandon Allen scored twice to lead the side to victory against the Eagles.

Daniel Wintermeier scored the opening goal for the Rowdies before Allen struck twice in the second half as Tampa Bay pulled away for victory. Recent signing Juan Tejada also found the net to round out the performance for the visitors.