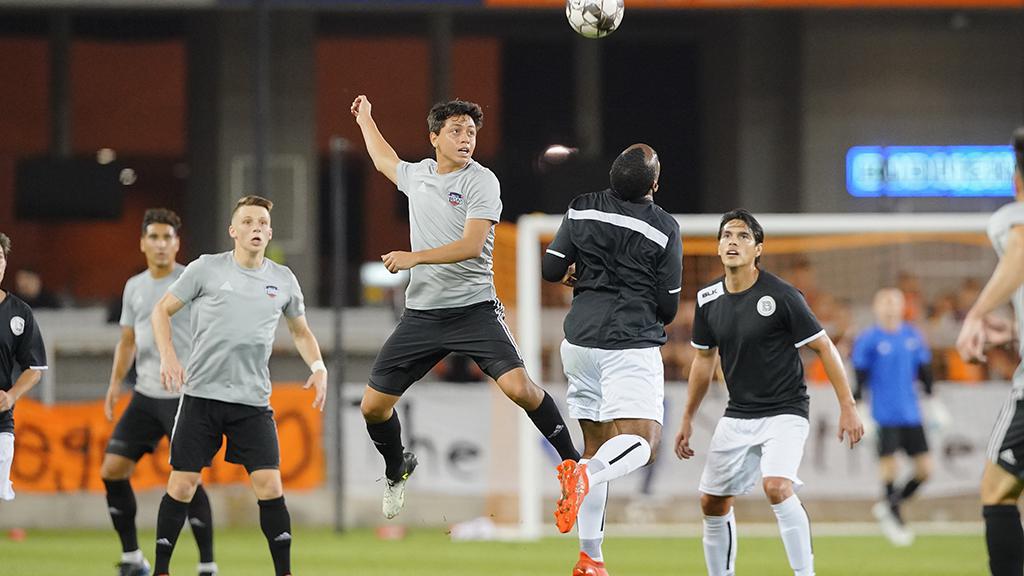 EDINBURG, Texas – Rio Grande Valley FC took a 3-1 victory against Texas rival Austin Bold FC in an 125-minute scrimmage played over three periods on Saturday night at H-E-B Park as Carlos Small and Victor Garza both found the net for the hosts.

The Toros struck first in the third minute when a through-ball by Wilmer A. Cabrera found Panamanian forward Small, who chipped a finish past the advancing goalkeeper. Austin almost hit back in the 19th minute from a free kick as RGVFC goalkeeper Nico Corti made a good save, but seven minutes before the first intermission Bold FC found an equalizer to make it 1-1 after 45 minutes.

The hosts didn’t take long to go back on top in the second period as a trialist scored five minutes in with a roofed finish from 12 yards out. Garza, returning to action after a knee injury, also had two dangerous chances in the period but couldn’t find the net as the game reached the 90-minute mark with the Toros ahead.

Toros forward Nico Lemoine almost added to the lead for the hosts in the 99th minute as he hit the post, while RGVFC goalkeeper Ben Willis made a big save to deny a Bold FC header eight minutes later to keep his side ahead. The Toros wrapped up the win late on from the penalty spot, though, as Garza shot into the right corner to conclude the contest.

Bonomo gave Republic FC the lead in the 16th minute as he capitalized on a chance created by Blackwood. Skundrich then added a second on the half-hour mark as Cameron Iwasa picked up the assist, and three minutes before halftime Blackwood added a third to go with his earlier assist.

Brown pulled back a goal for Reno in the 78th minute, but Sacramento quickly answered with Bonomo’s second of the afternoon to wrap up the victory.

Saint Louis almost took the lead in the sixth minute when Austin Martz found Caleb Calvert at the back post with a cross but his header was blocked out of play, but the Roughnecks grabbed the lead midway through the first half when a deflected cross sat up nicely for Rodrigo Bandeira to fire a bicycle kick into the top-right corner past STLFC goalkeeper Tomas Gomez. Saint Louis got back on level terms in the 34th minute, however, as a trialist was brought down in the penalty area by Tulsa goalkeeper Sean Lewis and STLFC newcomer Joaquin Rivas stepped up to convert from the spot.

The hosts took the lead five minutes into the second half as Sean Reynolds got onto the end of a set piece by Lewis Hilton and finished, and Saint Louis doubled its advantage seven minutes later as an Academy trialist cut inside the defense and blasted the ball into the near post. Gomez preserved the two-goal advantage for Saint Louis in the 68th minute with a point-blank save off another set piece, but from there STLFC saw out its first win against USL Championship opposition this preseason.

Francois put Ottawa ahead in the 21st minute as his driving run from the right side was capped off by a good finish, but the Union rallied to level five minutes before halftime when Kacper Przybylko put home a finish from Olivier Mbaizo’s low cross.

Philadelphia took the lead midway through the second half when an Ottawa defender was ruled to have handled in the penalty area. Fafa Picault stepped up and converted from the spot to put the Union ahead, and that was the way it remained as the MLS side held firm to its lead for the win.

SAN ANTONIO FC 0, EL PASO LOCOMOTIVE FC 0: San Antonio FC and El Paso Locomotive FC ended scoreless after a 120-minute scrimmage on Saturday evening at Toyota Field. Following a 75-minute match, the clubs squared off in a 45-minute game, but neither side was able to break the deadlock in the first meeting between the two Texas clubs.

San Antonio FC created numerous chances in the first match, highlighted by a Jack Barmby free kick that forced a diving save from El Paso goalkeeper Logan Ketterer. El Paso’s James Kiffe went close for the visitors with a bicycle kick that clipped the crossbar, while San Antonio’s Lance Laing, Billy Forbes and Cristian Parano all had chances to score only for Ketterer to come up with the saves to record a clean sheet.

CHARLOTTE INDEPENDENCE 1, NORTH CAROLINA FC 0: Enzo Martinez scored the only goal in the first half as the Charlotte Independence downed their NC Derby rival North Carolina FC at a rain-soaked Cardinal Gibbons High School. Martinez scored from a free kick in the ninth minute to give the Independence their third win in three outings this preseason.

Tormenta FC took the lead in the 15th minute as Marco Micaletto found the net for the hosts. South Georgia doubled its lead eight minutes later as former Rowdies midfielder Alex Morrell curled home a finish, but Tampa Bay pulled a goal back through a free kick by Fernandes in the 26th minute to leave it a one-goal game at halftime.

Morrell struck again against his former club to restore Tormenta FC’s two-goal lead 11 minutes into the second half, and while the Rowdies responded with 10 minutes to go as Hoppenot finished after a good piece of interplay with Andrew Tinari, the hosts held on for victory.