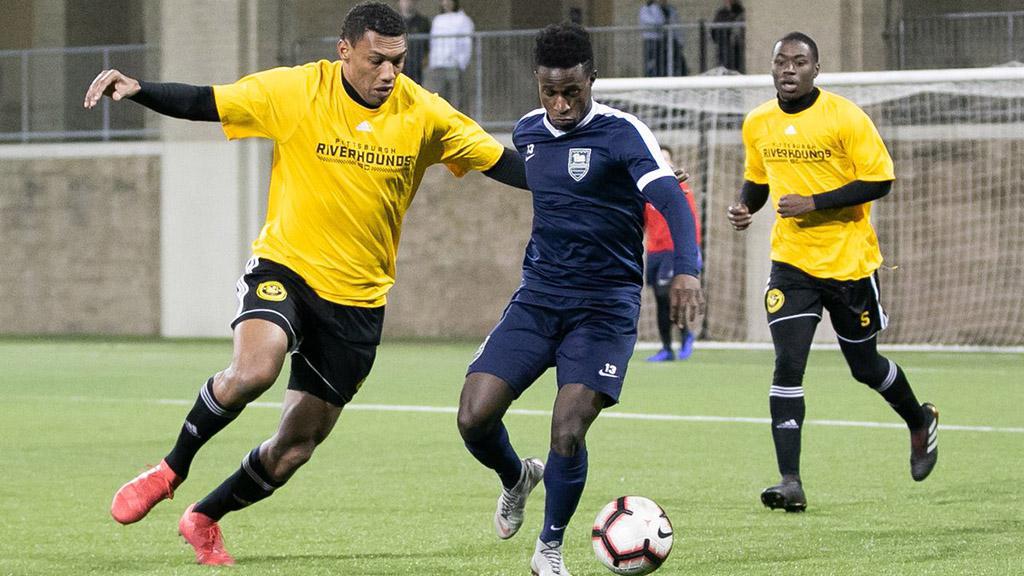 PITTSBURGH – Steevan Dos Santos found the net as Pittsburgh Riverhounds SC played to a 1-1 draw with University of Pittsburgh in a preseason exhibition on Friday at Ambrose Urbanic Field.

Both goals came in the opening half as the Panthers struck first in the 19th minute. Fielding a pass from the right side of the field, the Atlantic Coast Conference team beat goalkeeper Kyle Morton with a shot from the left-center of the 18-yard area. It was the first goal the Hounds had conceded this preseason, ending the shutout streak at 379 minutes.

The Hounds hit back in stoppage time, however, as Dos Santos blasted a shot into the back of the net from just inside of the left side of the penalty area. Riverhounds SC then pressed to take the lead in the second half, and it almost paid off with a minute to go when Thomas Vancaeyezeele fired from the edge of the penalty area, but the ball just curved high of the crossbar.

The Kickers opened the scoring in the 31st minute as their pressure from the flanks paid off. An initial shot was denied, but Jackson was on hand to put home the rebound. Mwape then doubled Richmond’s advantage in the 58th minute, and while Steel FC pressed to get back into the game over the second half it was stymied in its efforts. A late penalty kick by Bolduc wrapped up the scoring for Richmond as it continues its preparations for the inaugural 2019 USL League One season.

FORWARD MADISON FC 1, INDY ELEVEN 0: Indy Eleven suffered its first defeat of the preseason as USL League One side Forward Madison FC got a second-half goal from Zaire Bartley to take victory in Rockford, Ill.

Madison’s Paulo Junior had the first look at goal in the 13th minute with a right-footed effort from range that was handled by Eleven goalkeeper Evan Newton. Indy immediately retaliated as new arrival Thomas Enevoldsen found Matt Watson with a long cross, but the odd-angled attempt ultimately ended over the crossbar in the 14th minute.

Eleven forward Ilija Ilic followed up with an on-frame header three minutes later that Madison goalkeeper Brian Sylvestre did well to contain, and Indy had other chances to open the scoring as the half progressed, barely missing the back of the net with each shot.

Forward FC found the net 10 minutes into the second half, however, as a counterattack chance arrived for Bartley to open the home side’s scoring account from the top of Indy’s penalty area. The Eleven pushed to get back on level terms in the final half-hour, but Madison held firm to take victory in its first official outing in club history.