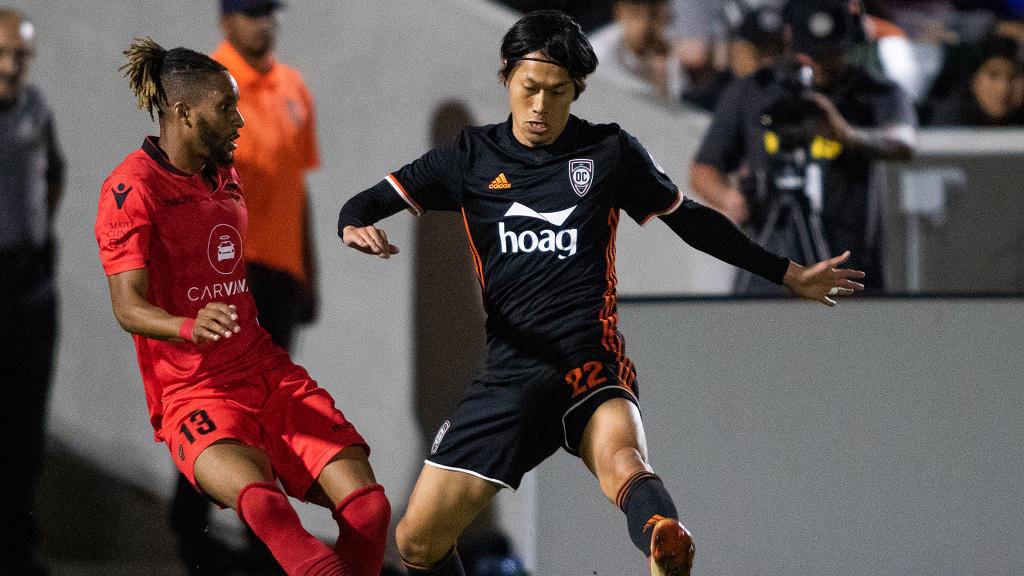 IRVINE, Calif. – Orange County SC announced the return on Friday of Koji Hashimoto after agreeing terms to a new contract with the Japanese midfielder. The signing is pending receipt of his P1 visa, and league and federation approval.

Hashimoto appeared in 23 games for Orange County in the 2018 USL Championship campaign as he helped the side achieve its best season in club history. Hashimoto scored two goals, including a tally in the Western Conference Final of the 2018 USL Cup Playoffs against Phoenix Rising FC, and also recorded 16 tackles, 14 interceptions and 40 duels won.

The 31-year-old began his professional career in 2006 playing for Nagoya Grampus of the J1 League. He transferred to FC Mito HollyHock of the J2 League in 2012 where he scored 19 goals and 20 assists during his two years with the club. He then joined Omiya Ardija in 2014, scoring five goals and one assist. He signed with Kawasaki Frontale of the J1 League from 2015-16, scoring one goal and adding six assists. In 2017, Hashimoto re-signed with FC Mito HollyHock where he would score three goals and seven assists during the season.

“Michael brings a good amount of experience and leadership into our team,” said LA Galaxy General Manager Dennis te Kloese. “He is a smart player. We are excited about his future within our club and look forward to providing him with opportunities for growth.”

Born in Sammamish, Wash., the 24-year-old Gallagher signed his first professional contract with fellow USL Championship side the Portland Timbers 2 in 2016 and logged 24 appearances that season. In 2017, Gallagher was signed by Real Monarchs SLC. Last season with the Monarchs, he appeared in 19 games, making 15 starts. In his USL Championship career, Gallagher has totaled 58 appearances, 47 starts and one assist.

RANGERS SIGN FRENCH WINGER: The Swope Park Rangers announced the club had signed winger Killian Colombie as it continues to prepare for the 2019 USL Championship season. The signing is pending league and federation approval.

Colombie, 23, has spent the last four years at Iona College in New York, tallying 15 goals and six assists in 72 appearances for the Gaels. He produced a career-best seven goals and three assists as a senior in 2018, culminating in All-MAAC First Team and United Soccer Coaches NCAA DI Men's All-East Regional Second Team honors.

The Paris, France native also enjoyed a successful campaign with Houston-based USL League Two side Albion Hurricanes FC Royals last year, posting a joint conference-best 10 goals to go along with five assists for the 7-7-0 side.

Colombie spent time in Paris Saint-Germain’s Academy as a youth player, and recently trained with Scottish club Hearts of Midlothian and MLS sides New York Red Bulls and San Jose Earthquakes. Colombie joined the Rangers on trial at the start of preseason and started the side’s only scrimmage so far, a 5-0 victory over Barton Community College on February 2.

“We look forward to adding Steve and Jordan ahead of the 2019 season,” Monarchs General Manager Dan Egner said. “We feel that both players should compete right away for minutes and we believe they’ll be a big part of what we’re trying to achieve on the field this season.”

Pena, a Payson, Utah native has featured in 15 matches this season for the RSL Academy U-19 side where he has made 13 starts. In 2018, Pena played in seven matches for the U-19s where he scored three goals. Pena joined the RSL Academy in 2015 and featured for the U-17s for two seasons before joining the U-19 contingent.

“I couldn’t be more excited to sign my first professional contract with Real Monarchs,” Pena said. “This is a crucial step in fulfilling my dream of playing for RSL one day. I can’t wait to get out onto the field with the Monarchs this season.”

Jasso has been a mainstay on the backline for the U-19s this season where he has started and played in 14 matches for the RSL Academy. Last season, the Sandy, Utah native played in 30 matches while scoring a single goal in each of his last two seasons. Jasso joined the RSL Academy in 2016 and featured for the U-17s on 35 occasions, totaling two goals.

“This means a lot to me largely because I’m coming out of the RSL Academy,” Jasso said. “I’m used to being here in Utah and I love the facilities, players and staff here. I’m excited to be able to sign my first contract here with the Monarchs and can’t wait to get started.”