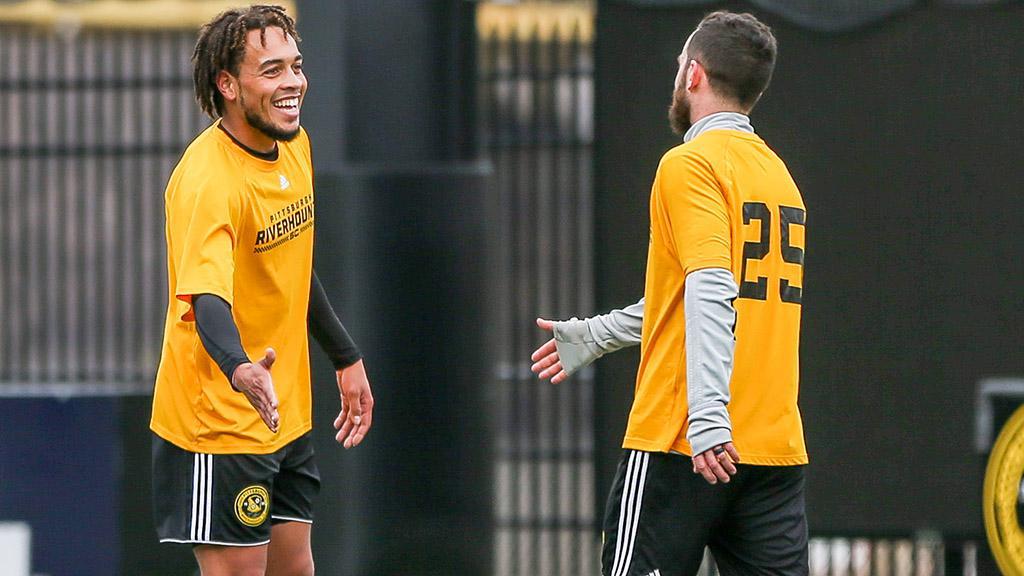 PITTSBURGH – Pittsburgh Riverhounds SC rolled to a second consecutive preseason victory as Neco Brett scored twice and four other players found the net in a 6-0 victory against Gannon University on Sunday at Highmark Stadium.

New arrivals Steevan Dos Santos and Christian Volesky both found the net for their first goals for the Hounds, while Kevin Kerr and trialist Eddy Enowbi also found the net.

“We were a little bit more settled today than Friday,” said Hounds Head Coach Bob Lilley said. “We had a few more contract guys playing. We played 12 today and Friday night we only played six – that helped. We’re trying to give a lot of minutes to the trialists, and I thought some of them showed reasonably well over the two games.”

The Hounds struck twice late in the first half as Dos Santos and Kerr connected. Two minutes before the break, Kerr’s corner kick was headed home by the Cape Verde forward, and Dos Santos returned the favor in stoppage time to set up Kerr for a second.

Volesky added a third four minutes into the second half to set off a flurry of three goals in five minutes that saw Brett strike twice in the 51st and 53rd minutes. Enowbi added a goal in the 68th minute to bring the final score to 6-0.

NEW YORK RED BULLS 5, PHOENIX RISING FC 1: Bradley Wright-Phillips scored a hat trick to lead a strong Red Bulls side past Rising FC at Naranja Park in Oro Valley, Ariz. as New York moved toward its final preparations for its Concacaf Champions League campaign that kicks off next week.

Wright-Phillips gave the Red Bulls the lead in just the sixth minute off a cross by Michael Amir Murillo and notched his second seven minutes before halftime. Kaku notched a third for New York in the 40th minute before Phoenix hit back on a goal by trialist Ben Spencer two minutes later, and Solomon Asante almost struck again for Rising FC just before the halftime break only for his shot to go just wide.

The Red Bulls restored their three-goal lead in the 56th minute when Alex Muyl converted at the second opportunity after Rising FC goalkeeper Zac Lubin had saved his initial effort, and Wright-Phillips then wrapped up his hat trick as he headed home seven minutes later.

BETHLEHEM STEEL FC 3, FC MOTOWN 0: Said Diaz, Nathan Harriel and Zach Zandi all scored in the first half to lead Steel FC past FC Motown at YSC Sports on Sunday for the club’s second win of the preseason.

Diaz gave Steel FC the lead in the 22nd minute as he curled home a finish from outside the penalty area, and Bethlehem then cemented its advantage late in the half. First, Harriel combined with returning forward Faris before finishing in the 42nd minute, and a minute later Zandi latched onto a through-ball by captain James Chambers to add a third.