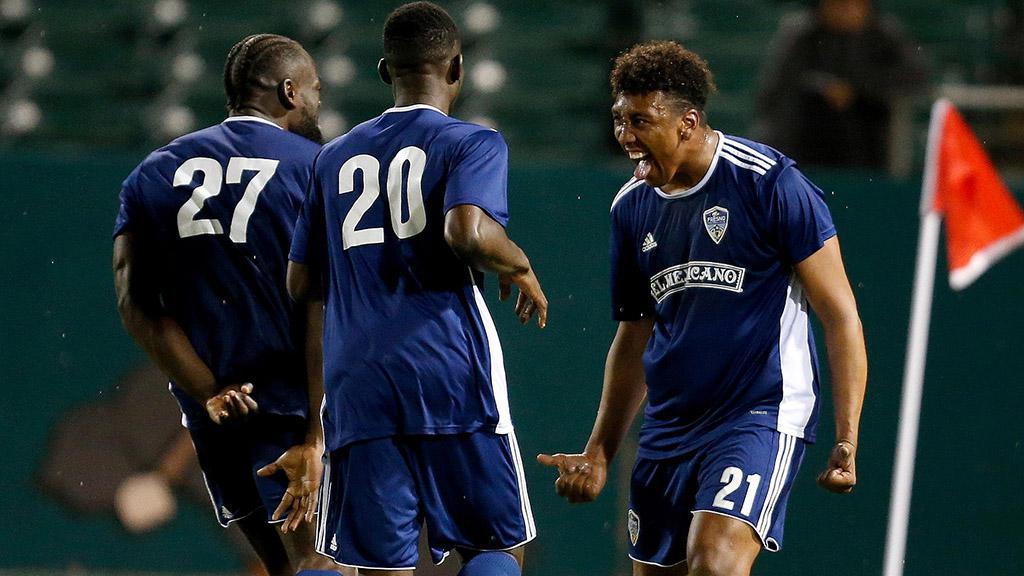 FRESNO, Calif. – Fresno FC saw Mickey Daly and Christian Chaney score either side of halftime to take a 2-1 victory against the LA Galaxy II at Chukchansi Park on Friday night in the Foxes’ first preseason outing of 2019.

The Foxes had an early chance to take the lead when an attack formed between Jaime Chavez, Juan Pablo Caffa and Jemal Johnson, with Chavez's strike at goal taking a deflection to miss just wide left of the target. The hosts took the lead in the 25th minute, however, as trialist Hiroki Kurimoto (previously at Honda FC) found Daly at the top of the box with a volley, as the 31-year-old defender headed it over LA's Abraham Romero for the lead.

Chaney doubled the Foxes’ lead four minutes into the second half after coming on as a substitute as he created space from his marker and put home a scissor-kick with his right foot. Again, it was a trialist providing the assist, with the cross coming in from Uchenna Uzo (previous with USL League Two’s Myrtle Beach Mutiny).

The Galaxy II pulled a goal back in the 59th minute on a goal from Hugo Arellano, but the Foxes had chances to restore their two-goal advantage before the end of the contest. Ramon Martin Del Campo saw a chance to add to his team's lead on a corner kick, but his header hit off the crossbar. New Foxes signing Qudus Lawal also had an opportunity at the 76th minute only to see his shot parried away by Galaxy II goalkeeper Eric Lopez, but the result held to give Fresno a nice lift to start preseason.

“It's an encouraging result,” said Foxes Head Coach Adam Smith. “We still have a lot of work to do, but it's building blocks and it's a good start. Some players surprised me, and some confirmed my thoughts, so myself and the staff will sit down tonight and make some tough decisions.”

The game remained scoreless for much of the contest, but the Hounds ultimately broke through with the game-winning goal in the 84th minute as Forrest put home a powerful strike from inside the penalty area to lift the Hounds to victory.

The first half was quiet, with neither team able to find much of a rhythm offensively. Cleveland State earned two corner kick opportunities in the 30th minute, but both attempts resulted in little success.

An effort from distance by Hounds defender Caleb Smith gave the Black and Gold their lone shot on goal of the opening period, but the trialist’s chance fell into the waiting hands of Cleveland State’s goalkeeper.

Following the halftime break, the Hounds managed to piece together more offensive chances. The first opportunity came in the 50th minute off the foot of midfielder Anthony Velarde from about 15 yards out, but a diving effort from Cleveland State’s keeper kept Pittsburgh off the board. Trialist Devyn Jambga fired another shot on goal in the 64th minute, but another save kept the game scoreless.

Five minutes later, the Hounds put together what was their best opportunity of the match to that point when Velarde lofted a corner kick opportunity into the 18-yard box, and a diving header from Forrest rang off the crossbar. With six minutes to go, though, Forrest put home his chance to send the hosts to victory.