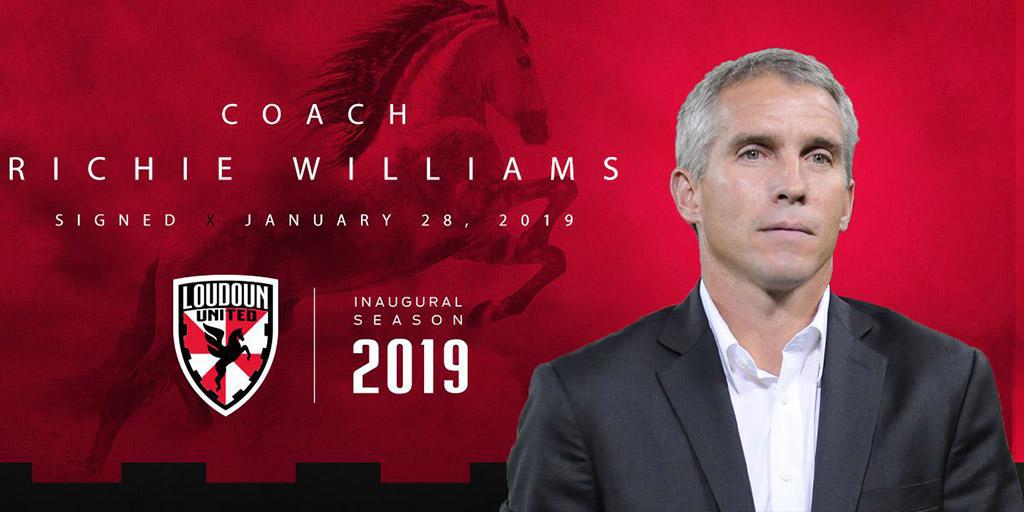 LOUDOUN, Va. – Three-time MLS Cup winner and former U.S. Men’s National Team assistant coach Richie Williams has been appointed as the first Head Coach in Loudoun United FC’s history as the club continues its preparations for its inaugural season in the USL Championship this spring.

“I’m honored to be named the first head coach in Loudoun United FC history and I'm looking forward to getting to work immediately,” said Williams. “I have a long history with D.C. United and spoke with Dave Kasper who is equally as excited about the Loudoun United project. We have a new opportunity to develop players, identify prospects in an area that's rich with soccer talent while also competing at a high level in the USL Championship. We have been working hard behind the scenes to build our roster for 2019 and we've got some work to do before our March 9 USL opener against Nashville. I'm looking forward to the challenge and can't wait to get to know the Loudoun United fans.”

Williams began his coaching career as an assistant coach at his alma mater the University of Virginia following his retirement as a professional player in 2005. The next year, he transitioned back into Major League Soccer after being named an assistant with the New York/New Jersey MetroStars assistant coach before being named interim head coach at the club in 2008. Williams took helm as interim head coach again in 2009 following the departure of Juan Carlos Osorio.

In 2011, Williams was hired as head coach of the U.S. U-18 Men’s National Team and transitioned over to work with the U-17’s at the national level months later. He subsequently led the U-17 National Team to the FIFA U-17 World Cup in both 2015 with a squad that featured current full internationals Christian Pulisic, Tyler Adams. Following a second stint in Major League Soccer as Real Salt Lake’s assistant coach on Dec. 28, 2015, before serving as an assistant coach for the U.S. Men’s National Team over the past two years.

“We are excited to secure a head coach with Richie's level of quality and experience,” Dane Murphy, Loudoun United FC Technical Director, said. “He was a leader as a player for D.C. United in the early years of the club and we hope he can establish the same winning traditions with Loudoun United FC. He has worked with the U.S. Men's National Team and has a thorough understanding of how MLS and the USL operate. We're looking forward to sitting down and continuing to prepare for an exciting inaugural season with Loudoun United FC.”

Prior to his entry to coaching, Williams had a successful professional career that saw him compete in the USL for the Richmond Kickers prior to the establishment of Major League Soccer, and while with the Kickers he helped the side claim the Lamar Hunt U.S. Open Cup in 1995. The following year he joined D.C. United, where he made 191 MLS appearances and helped the Black-and-Red claim three MLS Cups (1996, 1997, 1999), two MLS Supporters’ Shields (1997, 1999), a CONCACAF Champions’ Cup (1998), a Lamar Hunt U.S. Open Cup (1996) and an InterAmerican Cup (1998). He was inducted into the D.C. United Hall of Tradition on October 15, 2011 for his service to the club.

The midfielder also represented the U.S. Men’s National Team and earned 20 caps for his country from 1998 to 2002. He made his debut for the USMNT on Nov. 6, 1998 in a 0-0 draw with Australia in an International Friendly.