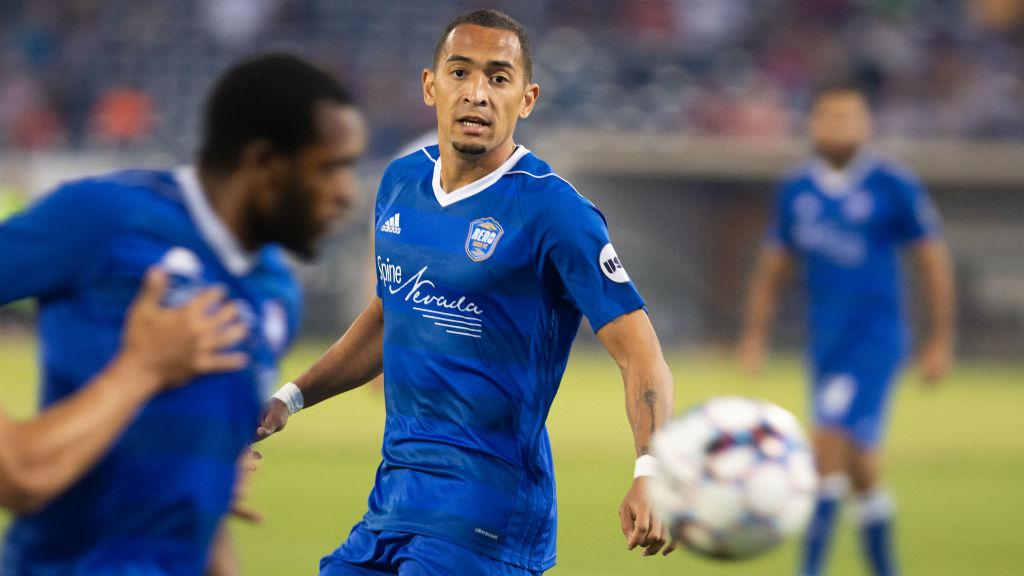 Will Seymore in action for Reno 1868 FC during the 2018 USL Championship season. | Photo courtesy Photo by David Calvert/Reno 1868 FC

RENO, Nev. – Reno 1868 FC announced on Thursday that it signed defensive midfielder Will Seymore ahead of the 2019 USL Championship season, pending league and federation approval.

Seymore joins Reno on a permanent basis after spending half of the 2018 campaign on loan from FC Cincinnati.

“We are really excited to bring Will back,” Reno Head Coach Ian Russell said. “He is a ball-winning midfielder with a very good range of passing.”

The veteran midfielder made four appearances for 1868 FC after linking up with the club in August and completed over 83 percent of his passes during his time in Reno.

Prior to joining FCC ahead of the 2018 campaign, Seymore spent two seasons in the USL Championship with the Vancouver Whitecaps FC 2. He has also featured for USL League Two sides Lane United FC and Portland Timbers U-23.

Seymore played collegiately at Oregon State University, tallying seven goals and nine assists in 73 games for the Beavers. He earned All-PAC-12 honorable mentions during his sophomore and junior seasons as well as making the All-Conference Second Team during his senior season.

Garcia, a product of US Grant High School in Oklahoma City, joins the first team after a successful 2018 season as captain of the Energy FC U-23 team, where he scored two goals and provided four assists in 11 matches.

Prior to his time at Energy FC, Garcia played collegiately at Northern Oklahoma College and Friends University. During his high school career at US Grant, Garcia led the Generals to the playoffs three consecutive years and earned second-team All-City honors as a senior.

“Josh had a really good season with our USL League Two team,” said Energy FC Head Coach Steve Cooke. “We worked with him all preseason so that he could be ready for the League Two season. When he played in our U23 team, for me, he was the standout player. Not only for his performances but because his performances were very consistent, hardworking and also in a variety of positions. I think Josh can be a good contributor in any of the right wing, left wing or number 10 positions, and I think he brings a great deal of versatility to our squad.”

The 21-year-old also has experience with the Toluca U-20 side as well as Cocula FC and the Chiapas U-17s. Partida brings a youthful edge to the Locomotive roster with solid professional experience already under his belt in the top echelon of professional Mexican soccer.

“Partida is a young, hungry player, who for me, is a very exciting addition. He is a natural left winger, loves to run at defenders and has a toughness and determination about him that is very characteristic of Liga MX players,” said Locomotive FC Head Coach Mark Lowry. “He is eager to learn and develop, and I know we can provide him the platform to grow on and off the field.”