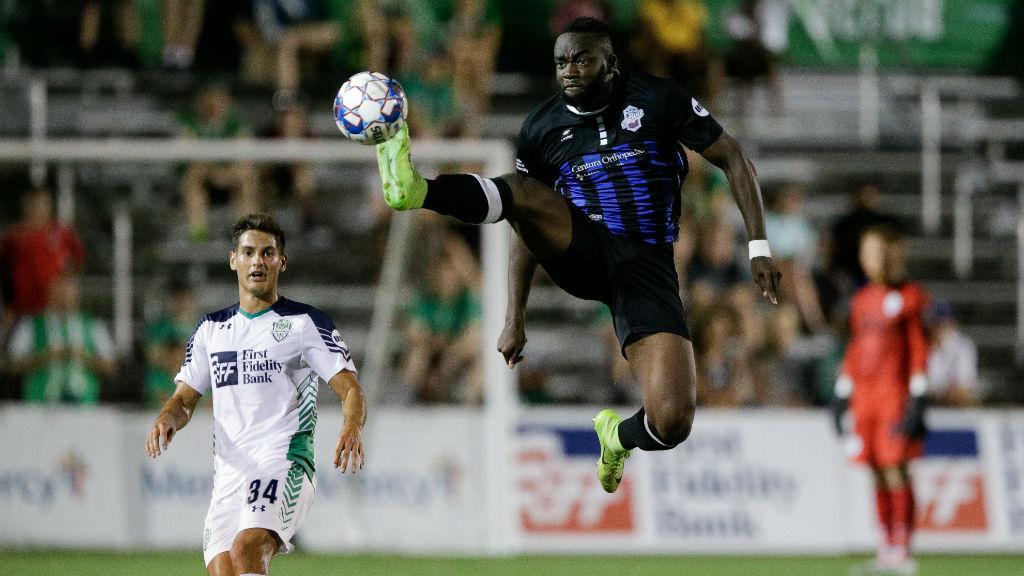 Uzo, originally from Lagos, Nigeria, played college soccer at both Houston Baptist College and Coastal Carolina University. He was selected in the fourth round of the 2016 MLS SuperDraft by Orlando City SC and spent time with the Myrtle Beach Mutiny before signing with the Colorado Springs Switchbacks in 2017. Last season, Uzo recorded one goal and one assist in a reserve role for the Switchbacks, making 20 appearances but just two starts.

“I want to thank God for another opportunity to play the game of football,” said Uzo, “It’s a privilege to play for a coach and organization that believes in me. I’m ready to give my all to this club.”

“Toby Uzo has the potential to be one of our most influential signings,” said Tulsa Head Coach Michael Nsien. “Toby is big, strong, brave, and has the technical ability to bring his teammates into the game. From the players we are supporting the center forwards with, to our belief in his ability, Toby will have every opportunity to be a double-digit scorer. Toby is also known to be great in the locker room and is very well liked by teammates and staff.”

Roberts, a native of Freetown, Sierra Leone, spent the past two seasons in the USL Championship with the Richmond Kickers. In 2017, Roberts led the Kickers with 116 clearances and helped the side keep seven clean sheets over 30 appearances. Before joining Richmond, the 26-year-old played with FC Edmonton and spent the 2016 season on loan with fellow USL Championship side Ottawa Fury FC.

“Mallan Roberts is another great addition to our back line. He has a lot of games under his belt, and has the ability to lead and organize a strong defense,” said Nsien. “Mallan has the size to match up with bigger strikers but also the athletic ability to run with more dynamic strikers. He is a very clean passer of the ball with both feet and has great soccer IQ. He also makes us an aerial threat on corners and set pieces. The signing of Mallan is another statement to our intentions of being competitive in the Western Conference.”

IGBEKOYI RETURNS TO NCFC: After bringing back Austin da Luz on Thursday, NCFC announced that it was re-signing fellow midfielder Victor Igbekoyi for the 2019 USL Championship season, pending league and federation approval.

After joining the team late in the 2018 season, Igbekoyi played 364 minutes, notched one assist on a game-winning goal against Penn FC, won nearly 70 percent of his tackles and completed almost 80 percent of his passes.

Prior to joining NCFC, Igbekoyi spent 12 seasons in the Azerbaijan Premier League, the country’s top level of competition. The Nigerian logged over 20,000 minutes and scored over 40 goals, suiting up for four different teams. Additionally, Igbekoyi played and scored in UEFA Europa League action.

“I’ve watched some tape and talked to our people about Victor and we are excited about having him back,” said North Carolina FC Head Coach Dave Sarachan. “I think now that Victor has had a taste of what this club and the area is like, coming in now in the preseason will put him even further ahead. I’m looking forward to getting to know him as a player.”

BETHLEHEM ADDS DIAZ: Bethlehem Steel FC added a new piece to its 2019 roster on Friday as the club announced the signing of Panamanian U-20 international Saed Diaz, pending league and federation approval. Diaz will be added to Steel FC’s active roster following receipt of his International Transfer Certificate and P1 Visa.

Diaz joins Steel FC from Tauro FC of Liga Panameña de Fútbol, Panama’s top division, where he made two appearances and scored one goal for the first team in the 2018 Clausura season. Diaz has featured heavily for Tauro FC’s reserve squad, joining the side for the 2016, 2017 and 2018 Apertura seasons, as well as the 2017 and 2018 Clausura seasons, notching a total of 34 goals across all seasons. During the club’s 2017 Apertura season, Diaz earned MVP and Golden Boot honors, slotting home 12 goals.

“We are very excited to be adding another exciting, young attacking talent to the group for 2019” Steel FC Head Coach Brendan Burke. “Saed Diaz is big, athletic and displays a willingness to work hard without the ball. We think he will fit and develop well with us.”

On the international stage, Diaz featured for Panama’s Under-20 National Team during the 2018 Concacaf U-20 Championship, scoring four goals and providing three assists in four starts during the competition. The forward’s performances helped Panama’s U-20s go undefeated in the competition and qualify for the 2019 FIFA U-20 World Cup in Poland this May.

“We are pleased to welcome Saed to our club,” said Ernst Tanner, Philadelphia Union Sporting Director. “We believe he was the best striker from the recent Concacaf U-20 Championship, a player with significant potential. We’re looking forward to getting him started at Bethlehem and integrated into our system. He is an excellent young prospect that represents precisely why Bethlehem Steel FC is an important piece in our development framework.”

Allach joins the Rangers after spending his professional career to date in Belgium with Lierse SK, while Ngom most recently played for Apejes FC de Mfou in his native Cameroon. Both signings are pending league and federation approval.

Allach, 20, made 56 appearances for Lierse in all competitions, tallying two goals and three assists from midfield. He has also represented Morocco at the Under-20 level in the past, making his debut in 2015 at the age of 17.

Ngom, also 20, is a product of the Ecole De Football Des Brasseries Du Cameroun (EFBC), the same youth academy that produced world superstar Samuel Eto’o. Ngom joined Apejes FC de Mfou in 2016 and has spent the last two seasons with the club in the MTN Elite One, Cameroon’s top division.

The 20-year-old attended trials with Premier League powerhouse Manchester City when he was 15. However, Ramirez stayed in his homeland and worked his way up the ranks in the Guadalajara youth program but never featured for the senior team in Liga MX. He did make one appearance on loan with fellow Mexican club Zacatepec.

“When the opportunity presented itself to bring Ramirez to El Paso, it was a very simple decision. He is very versatile, he can play three-to-four positions within the team. He is a very intelligent player, composed and incredibly mature player for someone so young,” said El Paso Head Coach Mark Lowry. “Developed and currently contracted at Chivas, one of the most prestigious clubs in the continent, shows how well regarded he is as a player. For us to work with Chivas and bring Ramirez here for 2019 will be great for all parties involved. I am excited to see Kevin develop with us and compete daily to make our team stronger.”