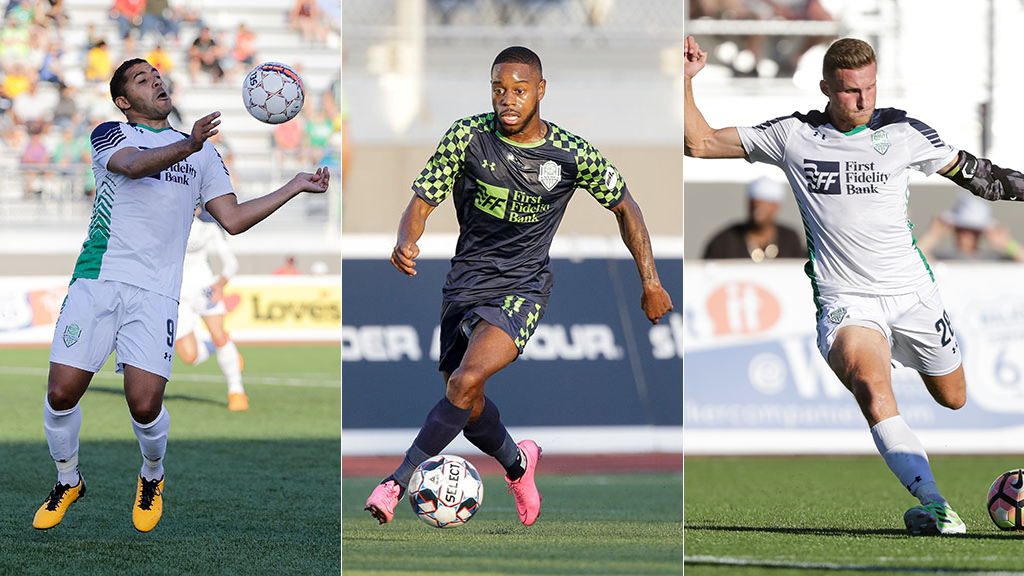 HARTFORD, Conn. – Hartford Athletic announced its first signings in club history on Tuesday as Wojciech Wójcik, Jose Angulo, and Alex Dixon were unveiled by the club for its inaugural season in 2019, pending league and federation approval.

“We’re very excited to welcome Wojciech, Jose, and Alex to Hartford,” said Hartford Athletic Chairman and CEO Bruce Mandell. “These players have proven that they can compete at the highest level and provide an exciting foundation for our club. We look forward to the season kicking off March 9th in Atlanta and taking the field here in Hartford for our first home match on May 4th.”

All three players have previous experience working with Hartford Athletic Head Coach Jimmy Nielsen after playing for him in the USL Championship with OKC Energy FC.

Wójcik is a 26-year-old forward from Elmwood Park, Illinois, who played for Energy FC in 2016 and 2017. He scored two critical goals during Energy FC’s run to the Western Conference Final of the 2017 USL Cup Playoffs, including delivering the game-winner against Reno 1868 FC in the Conference Quarterfinals. Wójcik, who was born in Poland, played collegiately at Bradley University where he won Missouri Valley Conference Player of the Year in 2013.

Angulo’s seven-year career has taken him throughout the North American soccer landscape, including a stint in Major League Soccer with the New York Red Bulls in 2012. The 30-year-old Colombian forward most recently played for OKC Energy FC in 2018. Acquired in the middle of the 2017 season by Nielsen, Angulo poured in 11 goals and five assists for Energy FC in 16 matches. Angulo had a career season in 2013 while playing for Pittsburgh Riverhounds SC, scoring a USL-best 15 goals en route to winning both the MVP and Golden Boot awards. He  has scored 47 regular-season goals in his USL Championship career, tied for sixth-most in the league’s history.

Dixon, a Bay City, Texas native, grew up playing in the Houston Dynamo academy, and went on to sign as a Homegrown Player in Major League Soccer with the Dynamo in 2011. A 28-year-old winger, Dixon notched 10 goals during his time in MLS. Described by many as one of the fastest players in the league, Dixon’s career has thrived since joining OKC Energy FC in 2017. He set career highs in 2018 playing in 34 matches, scoring 11 goals, and assisting five others.

“We are a new team, but we are not going to look like a new team,” Nielsen said. “These players know my coaching style and are ready to compete. That familiarity will give us an advantage that expansion teams don’t often have.”