How Rising FC Established Its Place in Phoenix’s Sports Market

From ‘Drogba’s Magic Water’ to star-power in the stands, Sam Doerr’s team has built buzz around club 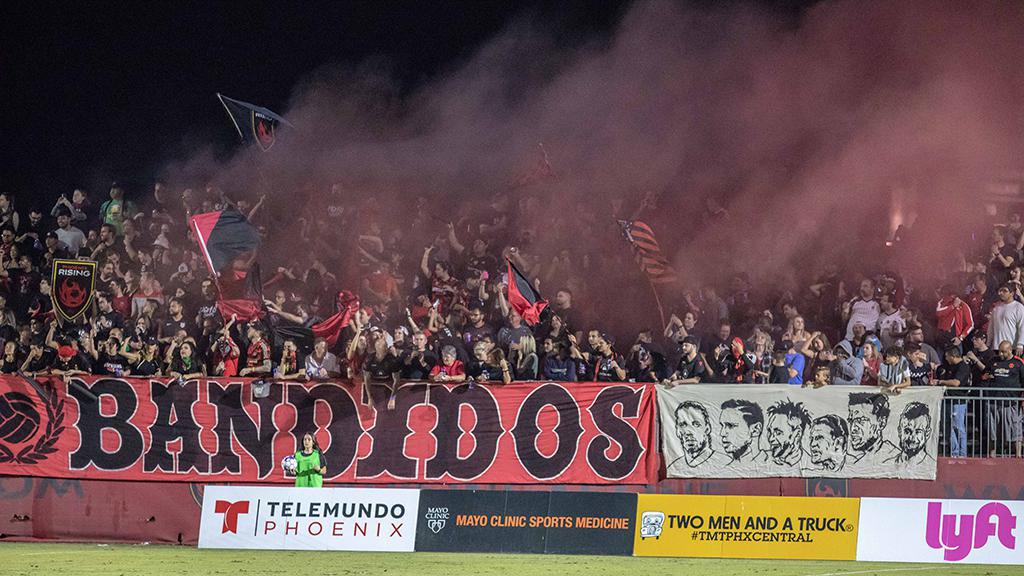 TAMPA, Fla. – It began with one of the more memorable moments of the 2018 USL Championship season and ended up being one of the best team promotions of the year.

But even for someone as creative as Sam Doerr, Phoenix Rising FC’s VP of Marketing & Sales, the inspiration to produce “Drogba’s Magic Water” didn’t come immediately after Didier Drogba’s water-bottle moment for Rising FC against the LA Galaxy II in a thrilling 4-3 comeback victory at the Phoenix Rising Soccer Complex.

However, the confluence of the highlight moment, the perfect play-by-play call, and the right relationships with the club’s local partners illustrated perfectly why Rising FC’s profile in its local market and on a national level has rapidly grown and made the club one of the best-known within the USL Championship.

“24 hours, 48 hours?” Doerr said about when the idea for the promotion struck recently at the USL Winter Summit. “It wasn’t something that immediately that night I had thought of, but that weekend you just saw all the posts, 4-3-3, you guys at USL, even in our market, SportsCenter, everyone was doing something with it and the call was so good that [USL Productions partner] Vista [Worldlink] produced – I think Mike Watts was on that game – it just made too much sense.”

With a two-week turnaround to the club’s next home game against Sacramento Republic FC, the club quickly worked with its local Coca-Cola distributorship to create custom labels for 2,500 Dasani bottles that would be distributed that night. The promotion was a success for the club as it welcomed a sellout crowd of more than 6,500 fans to the game, another big night in a landmark season for Rising FC on and off the field.

Drogba’s Magic Water is ready for you @PHXRisingFC fans! #WhatsInTheWaterpic.twitter.com/ErnJX5hcal

Phoenix welcomed more than 108,000 fans during this past regular season, the most in club history and a rise in average attendance from its first year as Rising FC, and then sold out both of its postseason contests on the way to winning the Western Conference championship in November. Those attendance numbers have been driven by numerous factors, but the ability Doerr and the rest of Rising FC’s front office team have shown to amplify the spotlight on the club in a city that also has teams in each of the “Big Four” professional leagues has helped Rising FC build something different for the city’s sports fans.

“We tend to take an outsider’s approach a little bit, which works for our market,” said Doerr. “It’s a unique market in terms of millennials, we have tons of Hispanic fans, and you have your soccer families, right? So, we take a different approach to each of those different clusters that exist. It’s not a blanket approach, we don’t treat everybody the same, we have a targeted approach depending on who we’re talking to and who we’re trying to get through, but I think it all boils down to a grassroots engagement-type approach with all of them.

“I know it’s kind of a buzzword, grassroots, but truly that goes from our digital footprint to our events to the gameday experience. We don’t do a ton of TV and print ads, it’s mainly Instagram and Facebook ads and word of mouth and whatever it might be.”

Understandably, Doerr keeps a highly active social media presence, as do other key figures in Rising FC’s front office as the club looks to bring its message to current and potential season-ticket holders. That personal touch has certainly gone a long way with the club’s fans, who praised the availability of Rising FC’s staff when questions need to be asked.

From the club’s official accounts, though, Rising FC has looked to diversify the way it approaches different forms of social media to best engage the different sections of fans that live in different spaces on the internet.

“Daily, we’re trying to be active, four or five posts and not just the same thing, it’s got to be different, and based off the engagement and what our fans react to, we adjust what our content is going forward that week. I think having a plan is good, but if you stick to a plan that’s where you can get in trouble, you’ve got to be able to adjust on the fly.” 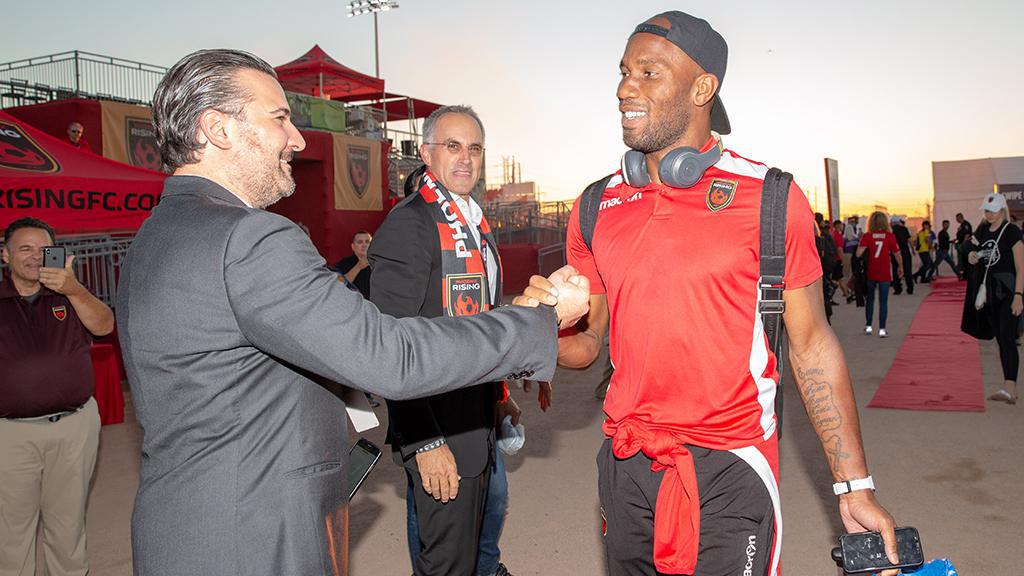 Didier Drogba's star-power has helped attract a spotlight to Rising FC, but so have the regular appearances from players from Phoenix's other professional sports clubs. | Photo courtesy Michael Rincon / Phoenix Rising FC

Of course, having a player like Drogba as the club’s centerpiece over the past two seasons has helped raise the profile of the club as well, and attracted players from Phoenix’s other clubs to come out to games. Arizona Diamondbacks pitcher Archie Bradley and former Arizona Coyotes hockey player Brendan Perlini attended Rising FC games this past season, while the club’s postseason contest with the Swope Park Rangers brought legendary Arizona Cardinals wide receiver Larry Fitzgerald, Bradley’s Diamondbacks teammate Zack Greinke and recent Washington Nationals signing Patrick Corbin out to the game.

“A lot of these guys are watching EPL in the morning, or they’re playing FIFA, their kids are into the sport and naturally they want to come out and be a part of it and see what’s going on in Phoenix, and I think that’s where the star-power of Didier really comes,” said Doerr. “Didier’s more popular on the world stage, but in Phoenix these guys are probably more popular than Didier and they’re thrilled to get a signed pair of cleats from Didier or his jersey.

“They’re coming there not to be seen, they’re coming to be part of it, and that’s a big difference. A lot of times you’ll get guys … who go to an event to be seen, it’s a good thing for you to be seen, and while that may be the case I want to tell you almost every single guy that’s come to our game has genuinely wanted to be there to be part of what’s going on, and they’ll follow up. I think all of those guys that were at the Swope Park game then retweeted when we won at Orange County [in the Western Conference Final], so they’re engaged.”

Those connections with players have opened doors for Rising FC to develop stronger bonds with its fellow Phoenix clubs and the cross-promotional possibilities that come for Doerr and his colleagues with it. Doerr believes the increased profile soccer has taken in the national sporting conversation has also played a role in opening doors for the club, and while he doesn’t think Rising FC has quite arrived fully, it’s getting closer to becoming reality.

“We’ve presented ourselves in the market that we’re a young, attractive fun place to be to go have a good time,” said Doerr. “There’s a buzz, and I think the engagement from our fans on social media, tweeting at these guys and that groundswell of support and all the faces around town piqued people’s interest to say, ‘hey, I’ve got to go and check this out, see what it’s all about.’ That’s what’s led to us looking at doing a Rising night at a Coyotes game, we’re looking at doing a Winter in July event at one of our games to promote the Coyotes, very similar things with the D-Backs and the Suns, so it’s certainly been noticeable, and I think it’s even taken off more in the last three-to-six months.”

But while promotional nights like those can be planned well in advance of a season kicking off – just like other favorites from last season including the Diplo bobblehead doll Rising FC produced for the DJ and minority owner in the club – the spontaneity of “Drogba’s Magic Water” epitomizes best why Rising FC is succeeding in winning over new fans in the Valley.

“The magic water was probably one of our favorite things we did last year, and it’s just once again capitalizing on the moment and being nimble and working quickly to pull it together,” said Doerr.