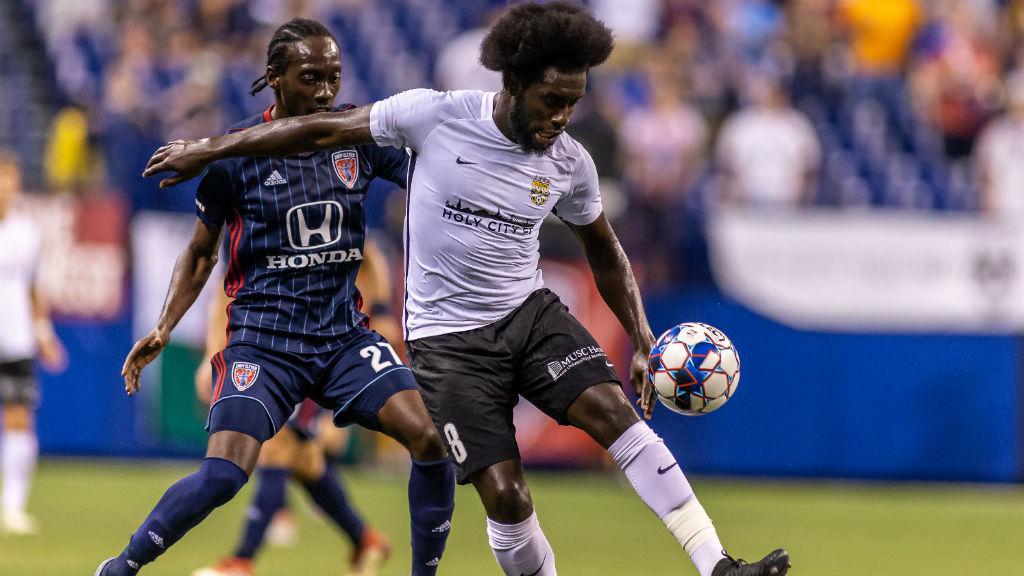 INDIANAPOLIS – Indy Eleven continued to shape its roster for the 2019 USL Championship season on Thursday as the club announced the signing of midfielder Neveal Hackshaw, pending league and federation approval. Per club policy, terms of the deal will not be released.

Hackshaw joins from the Charleston Battery, where he made 82 appearances over three seasons with the club. In 2018, the 28-year-old scored one goal and recorded two assists in over 2,800 regular-season minutes, while accumulating 146 clearances and 45 interceptions in a holding midfield role.

Prior to his time in the USL Championship, Hackshaw played for Trinidad and Tobago TT Pro League clubs North East Star FC and Joe Public FC. The La Horquetta, Trinidad and Tobago native has been capped eight times for his country, most recently appearing in the side’s 2-0 win over United Arab Emirates in an international friendly on September 6, 2018.

“Neveal is an excellent athlete who defends well and is very comfortable in possession of the ball,” said Indy Eleven Head Coach Martin Rennie. “He’s a young player with a lot of potential and we’re very happy that he’ll be part of our team in 2019.”

EWOLO RETURNS TO NCFC: North Carolina FC announced on Thursday that forward Donovan Ewolo will return to the club in 2019 on a season-long loan agreement with Czech Republic club MFK Vyskov. The move is pending league and federation approval.

Ewolo also spent last season on loan with NCFC, scoring eight goals and added one assist in 31 appearances across all competitions. Notably, Ewolo showcased his ability with a four-goal performance against Atlanta United 2 on Sept. 21, 2018 – including a first-half hat trick.

SAFC ADDS EBOUSSI: San Antonio FC also announced a loan deal with MFK Vyskov on Thursday as the club acquired defender Pascal Eboussi for the 2019 USL Championship season, pending league and federation approval. Per club policy, terms of the deal were not disclosed.

Last season, Eboussi appeared in 14 matches for Colorado Springs Switchbacks FC, recording 49 clearances, 29 tackles, 25 interceptions and a 76.9 percent passing accuracy. The Cameroon native featured a 69 percent tackle success rate while winning over 52 percent of both his duels and aerial duels on the season.

“We are pleased that Pascal is joining us and adding to our back line,” said SAFC Head Coach Darren Powell. “He is a young center-back that has played in over 30 games in the USL the past two years with Colorado Springs. He is somebody we hope we can continue to develop and improve while improving our team for the 2019 season.”

The 20-year-old also appeared in two Lamar Hunt U.S. Open Cup matches in 2018, playing in 210 total minutes including 120 against San Antonio FC in the third round of the tournament at Toyota Field. Eboussi originally joined the Switchbacks prior to the start of the 2017 season, making 31 appearances and scoring two over his two seasons with the club.

“I want to say thank you to Coach Powell and the club for giving me this opportunity,” said Eboussi. “I am excited to arrive for training camp and begin working with my new teammates.  We want to give the fans a season to be proud of in 2019.”

Pratzner made 17 appearances last season in the USL Championship with Pittsburgh Riverhounds SC, recording 71 clearances, 25 interceptions and winning 46 duels. He played under Hounds Head Coach Bob Lilley in 2017 as well, making 13 appearances with the Rochester Rhinos.

Prior to beginning his professional career, Pratzner played collegiately at Xavier University from 2013-16. He amassed 71 games played with 70 starts, four goals, and one assist while holding down the backline during his four seasons. He was named to the Big East Conference All-Tournament Team as a junior, in addition to anchoring a defensive unit that set school records for shutouts (11) and team goals-against average (0.84) as a sophomore.

“Todd is a very good and experienced central defender,” said Memphis Head Coach Tim Mulqueen. “He joins us from a winning culture, and we look forward to him bringing those winning attributes to Memphis. Todd is another member of the team who has a tremendous thirst for work, and he will push the group forward.”