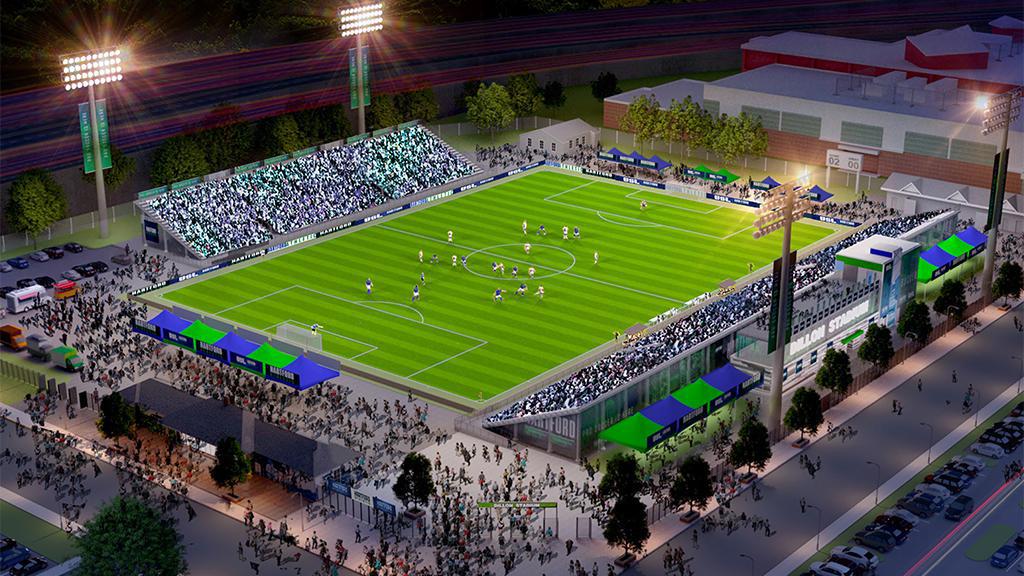 The revitalization of Dillon Stadium is set to be completed in time for the start of Hartford Athletic's inaugural season in the Spring of 2019. Photo courtesy Mark Guthrel / Saint Louis FC

Originally opened in 1966, the venue will be the home of Hartford Athletic as it joins the USL Championship for the 2019 season with Jimmy Nielsen having been appointed the club's first Head Coach. Work has already begun at the venue, but Monday's ceremony offered an opportunity for the club and the honored guests to celebrate what is a centerpiece of a larger regeneration project for the Coltsville district in the city.

“Over the last eight years my administration has made significant investments in the city of Hartford, and this is yet another transformational project that will benefit the entire capital region,” said Governor Malloy. “In this case, we are revitalizing an important city landmark, bringing a new professional sports franchise to the region, and connecting Coltsville to Hartford’s downtown core. Most importantly, we are doing it with a true public-private partnership. I have no doubt that the revitalization of Dillon Stadium will usher in a new sense of pride and community to Hartford."

The City, the State, the CRDA, the Hartford Foundation for Public Giving – through its new initiative HFPG Impact! Greater Hartford – and Hartford Athletic have come together to make this project a reality and further the economic transformation in Hartford. In addition to the $10 million in Neighborhood Funds authorized by the State Bond Commission for the Dillon Stadium-Colt Park redevelopment project, Hartford Athletic ($1.5mm), the Hartford Foundation for Public Giving ($1.7mm), and the Department of Economic and Community Development ($800k) have stepped up to contribute up to $4 million to deliver a stadium that meets USL Championship requirements and will provide a fitting home for one of the league's new clubs.

“This has been an amazing team effort and a best practice public-private partnership that will continue the economic and cultural momentum we have in Hartford,” said Mandell, Chairman & CEO of Hartford Athletic. “Today represents another major milestone in our effort to restore this iconic venue for the youth, community groups, and key stakeholders in the Coltsville neighborhood and throughout Connecticut. We are one step closer to our inaugural season in 2019 and bringing professional soccer to Connecticut.”

With installation underway by FieldTurf USA, another major milestone has been reached in preparation for the 2019 USL Championship campaign. The state-of-the-art turf system will feature an organic infill surface that will be FIFA and World Rugby-certified. That means Dillon will be the first field to feature organic infill and achieve both prestigious certifications in North America. The field will provide a playing surface that will serve the highest level of professional soccer while allowing for increased community use.

“HFPG Impact! Greater Hartford is committed to investing in projects that generate significant community benefit and further key development opportunities in the region.  We believe the community fields at Dillon Stadium and Colt Park project will ensure priority, inclusive access for Hartford residents to new, quality, safe recreation space in the city, and we look forward to finalizing an agreement to that end,” said Williams, the Hartford Foundation President.

“The renovation of Dillon Stadium represents the latest big step forward in revitalizing the Coltsville neighborhood and building a vibrant Capital City,” added Hartford's Mayor Bronin.  “Working in partnership with the State, the Hartford Foundation, and Hartford Sports Group, we’re not only preserving a piece of Hartford history – we’re bringing Dillon Stadium back to life as a community asset, a home to professional soccer, and a driver of economic activity for the City of Hartford.”

FACTS ABOUT THE SYNTHETIC FIELDTURF FIELD

The durable synthetic FieldTurf field is composed of tufted, slit-film and monofilament polyethylene fibers. The infill will be composed of a mixture of silica sand and FieldTurf’s organic mixture of coconut husks and cork, PureGeo. The field has a manufacturer’s warranty to cover 10 years of use. The FieldTurf is installed over a Brock USA PowerBase YSR shock attenuation pad. The shock pad will be in place through multiple turf installations and has shock attenuation – GMax and Head Impact Criteria (HIC) guarantees for 25 years – ensuring the safest possible field for a generation of players.

The presence of the shock pad and the organic infill mean the field will be safer and cooler than traditional crumb-rubber fields and engineered to host all stadium events, especially professional soccer. It will be the first field with organic infill to receive certification from both FIFA’s Quality Turf Program and World Rugby’s Player Welfare – Artificial Turf Program in North America.