What is Austin Bold FC’s Marcelo Serrano Doing in the U.S. Virgin Islands? 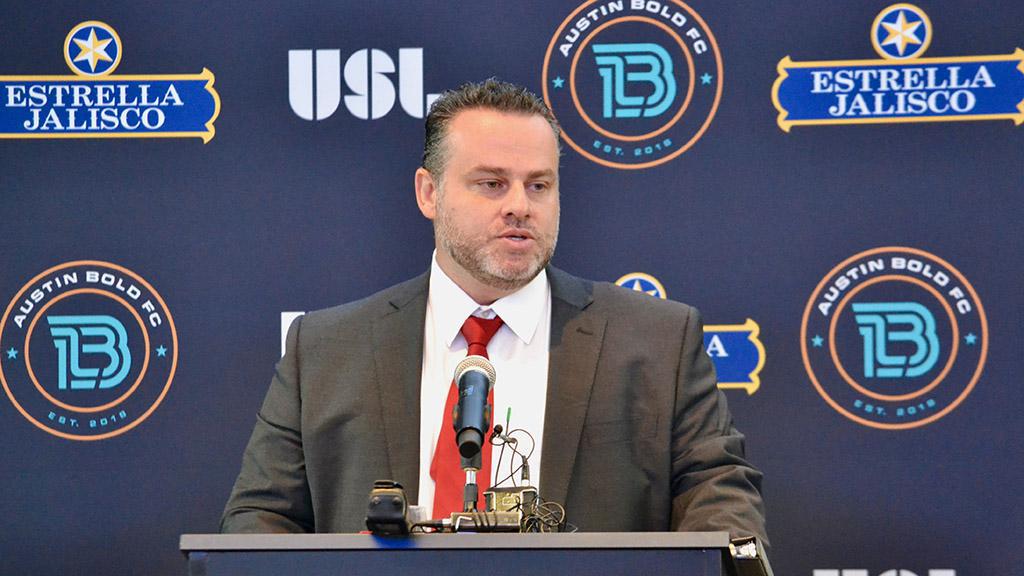 Austin Bold FC Head Coach Marcelo Serrano is not only building a side to compete in the USL Championship in 2019, but also looking to lead the U.S. Virgin Islands to a brighter future on the field. | Photo courtesy Austin Bold FC

BRADENTON, Fla. – As the first Head Coach in Austin Bold FC’s history, Marcelo Serrano and his team are in the process of building a squad that they hope will be immediately competitive in the USL Championship next spring for the club’s inaugural season.

With the resources available to him through the club’s strong local ownership group, while the challenge may be a tricky one as the league’s competitiveness rises each season, it’s one that has the potential to have immediate success as Bold FC looks to follow previous USL Championship expansion sides like Nashville SC, Reno 1868 FC, the Swope Park Rangers and Louisville City FC who all reached the postseason in their first seasons.

By contrast, the other project Serrano has taken on while also serving as Austin’s Head Coach has a far longer timeline to reach potential success.

Ranked No. 200 in the current FIFA rankings, the U.S. Virgin Islands are at the start of what Serrano hopes will be a long-term process that can find a path to changing the culture of the sport on an island that has a passion for the game. After an 8-0 defeat to Canada this fall that opened Concacaf Nations League Qualification, a sorting process for which teams would land in League A, League B or League C when the tournament proper begins, the size of the task at hand was evident, but Serrano is hopeful the long-term plans he’s implementing will pay off.

“The beginning is always hard,” said Serrano. “Before you can think about the future, you’ve got to study history. We’re trying to change the best results that we’ve had, but it’s a huge challenge. You cannot change a culture in two months, three months, you need two years, then two years more.”

If there’s a man for the job of taking a country whose best ranking all-time of 177th in the world came in 2015, though, it’s Serrano. A veteran of both domestic soccer in his native Brazil and with the Brazilian and United States National Team programs, the 38-year-old has built a solid reputation as an organizer and teacher of the game throughout his prior coaching stops. That ability to provide structure where there was little in the past is going to be a major asset to the USVI as it looks to build a program from the ground up.

“I believe in processes outside the field, because before reaching the field we have so many things to work on to be right on the field,” said Serrano. “One of my strengths on the field is working on tactics, working on player’s organization, but it takes time, and sometimes soccer doesn’t give you this time, but this is a two-year process to start something in the first phase, five-year process to start something with the youth.” 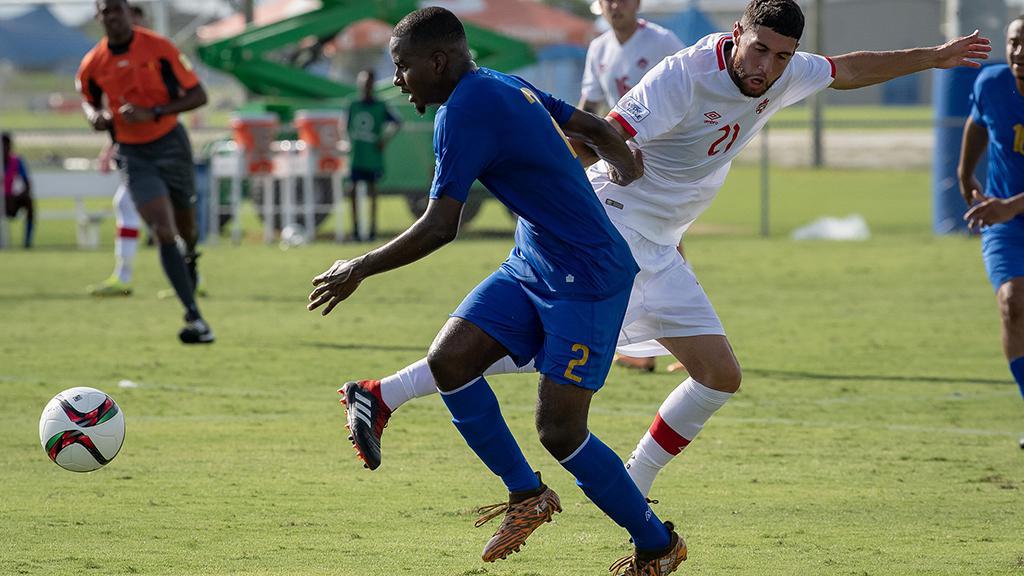 The U.S. Virgin Islands are currently ranked No. 200 in the world, 124 places below their first opponent in Concacaf Nations League qualifying, Canada. | Photo courtesy Canada Soccer

For a culture that loves to play but hasn’t had the structure to turn that willingness into a cohesive plan, the advent of the Concacaf Nations League is going to provide the potential to implement a structure that the USVI hasn’t previously had. Regular competitive games for a country that didn’t play a single game, exhibition or otherwise, in 2017 is a welcome arrival for the country’s players, who count in their number former Charleston Battery midfielder JC Mack.

Now playing in Iceland, Mack serves as USVI’s captain and is excited by the changes the tournament will bring for smaller nations within Concacaf. For a soccer culture that loves to attack and play with skill with flair, Mack believes finding the right balance between the intuitive style of the country’s players and the tactical structure that Serrano and his staff are working toward building is going to be key.

“The model on the island is ball at our feet,” said Mack. “Everyone wants to play with the ball at their feet, everyone really wants to be able to move the ball on the ground, and I think that’s something we’re trying to harness. If you can harness that with organization, you can blend that into the culture and you can start a successful culture.”

Mack is one of the few players with professional experience within the USVI squad, with another being Aaron Dennis, who this past season played for Penn FC in the USL Championship. Contacted by Serrano earlier in 2018 to gauge his interest in playing for the country in which he was born, Dennis’ USVI debut came against Canada. While the result might have been dispiriting against a more experienced side the opportunity to illustrate what could be possible for the country’s players is still an exciting one for the 25-year-old forward.

“Absolutely,” said Dennis. “After a loss like that it’s a bit devastating and kind of lowers the confidence, but you’ve just got to bounce back and be ready for the next match. Hopefully the guys will go back home, take the training serious and be ready.” 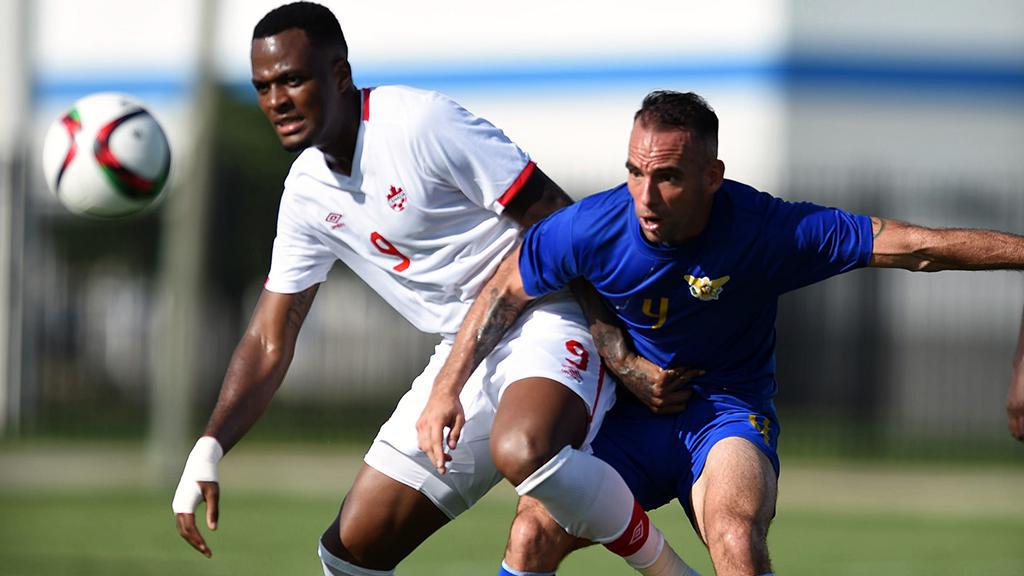 Some of the U.S. Virgin Islands' players are currently based in the United States, including NTX Rayados' Carlos Labrada. | Photo courtesy Canada Soccer

Getting more players into professional situations outside the USVI’s domestic league is something that both Serrano and Mack believe is going to be important to the program’s long-term success. With the advent of the Concacaf Nations League providing more opportunity for the country’s players to convene for competitive games on a year-round basis, the continued expansion of playing opportunities in the United States through the USL Championship and USL League One is an avenue both hope players can take advantage of.

“That’s something that Marcelo talks about, getting players in a system outside the island is going to be key, and [League One] and the USL is going to be a perfect opportunity to get in and see what it’s going to be like in a professional environment every day,” said Mack. “Once they can see that, and feel that, and understand that, then they can bring that in here and the standard of everyone in the room starts to rise.”

USVI’s defeats to both Canada and Curacao – both of which featured at the 2017 Concacaf Gold Cup and are likely to be part of the tournament again next summer – certainly didn’t get things off to an auspicious start. Even if the plan comes off, the earliest the USVI might be looking at contending for a place at the federation’s biennial tournament may be 2023.

In the grand scheme of things, that’s a very long way away, and a lot must be accomplished to pull one of the smallest soccer nations in the world up to that level. Serrano, though, remains upbeat that there are tangible goals that can be reached building toward that point.

On Sunday night, the U.S. Virgin Islands squad led by the experienced Brazilian coach will enter its third game in the qualifying stage for the Concacaf Nations League as it visits Barbados, with hope remaining strong that a better future lies ahead over the five-year plan that has just got underway.

“The one thing I’m looking forward to is the next win,” said Mack. “I want the team to win, I want to show that we are doing something, that we are capable of putting forth a performance that will get us a win. Over the next five years I want to see the youth players come through. We have a 16-year-old playing left back [against Canada]. Wonderful effort today. We have so many youth kids that should be able to get in on that five-year process, that’s my favorite piece and I hope to be able to build that.”