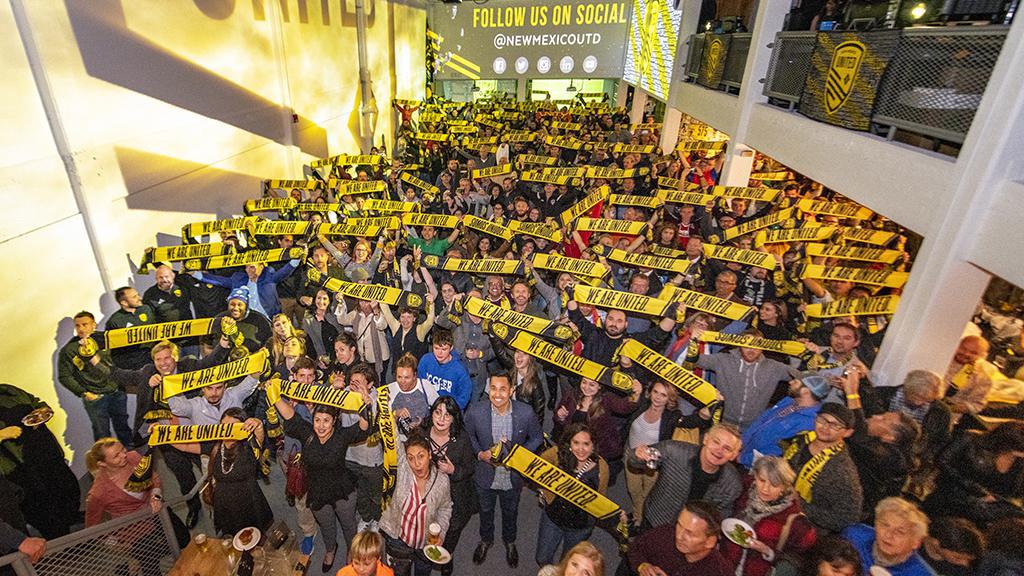 ALBUQUERQUE, N.M. – While there was a packed house last Thursday night at Louisville’s Lynn Stadium for the 2018 USL Cup between Louisville City FC and Phoenix Rising FC, about 1,300 miles to the west, New Mexico United – one of the league’s new arrivals for the 2019 season – introduced around 500 of its fans to the new league and some of the club’s recent signings at the Black & Yellow Bash in downtown Albuquerque.

Tickets for the event sold out within days of going on sale, evidence of the excitement that the new club’s arrival has generated in the city as guests including the Mayor of Albuquerque Tim Keller were on hand to see first-hand what the USL Championship would bring to the state of New Mexico in 2019.

For New Mexico native and longtime USL standout Josh Suggs – who alongside Keller, New Mexico United Owner Peter Trevisani, Head Coach Troy Lesesne, and Chief Operating Officer Amanda Powers was one of the guest speakers at the event – the night was one to remember.

“The Black & Yellow Bash was a truly remarkable and unforgettable event for New Mexico United,” said Suggs. “The fans showcased their passion and excitement for what is to come. I am so proud to be a part of this wonderful team and am counting down the days for our first game at Isotopes Park.”

Suggs was joined by fellow New Mexico native Devon Sandoval at the event, which featured gourmet food by Dig & Serve, ambience and art projection by StoryLab Interactive, and delicious, craft beer from Albuquerque-based Marble Brewery. Among the visual presentations that lit up two-story walls inside and outside the venue was a video that featured the club’s first signings.

Trevisani and the club’s leadership were thrilled by the response the night generated from the fans, with New Mexico United merchandise flying off the racks and new season ticket memberships being sold throughout the evening.

“I am humbled by the tremendous support we have received from the people of New Mexico,” said Trevisani. “They have welcomed us with open arms are already bleeding yellow and black. We believe in our ability to be a positive agent of change and bring this state together in a way it never has been before.”

“With our vision being to bring New Mexicans together in ways that they have never experienced before, this event hit the nail on the head,” added Patel. “Season ticket holders, corporate partners and new fans alike showed up in droves for the Black & Yellow Bash and it was a memorable night for New Mexico!”