TAMPA, Fla. – The United Soccer League announced on Tuesday that LA Galaxy II midfielder Efrain Alvarez has been voted the 2018 USL Young Player of the Year. In his first full professional season, the 16-year-old Alvarez set records within the league while recording double-digit goals for Los Dos’ stylish attack.

Alvarez received 40 percent of the vote to receive the award, with Hassan Ndam of the New York Red Bulls II finishing second on eight percent and both ATL UTD 2’s Andrew Carleton and the Swope Park Rangers’ Wan Kuzain finishing tied for third on six percent. In total, 22 different players earned votes in the ballot.

Alvarez made his professional debut for the Galaxy II on October 7, 2017 at the age of 15 years, 3 months and 18 days, becoming the youngest player in the league’s history. This season he proceeded to become the youngest player to record a hat trick when he struck three times against Saint Louis FC on May 9, and then repeated the feat on September 22 against Real Monarchs SLC to be one of only two players in the 2018 regular season to record a pair of hat tricks.

“I am honored to be named USL’s Young Player of the Year,” said Alvarez. “I am very grateful for the coaches and teammates that have helped me get to this point in my career. I’m looking forward to an even better season next year.” 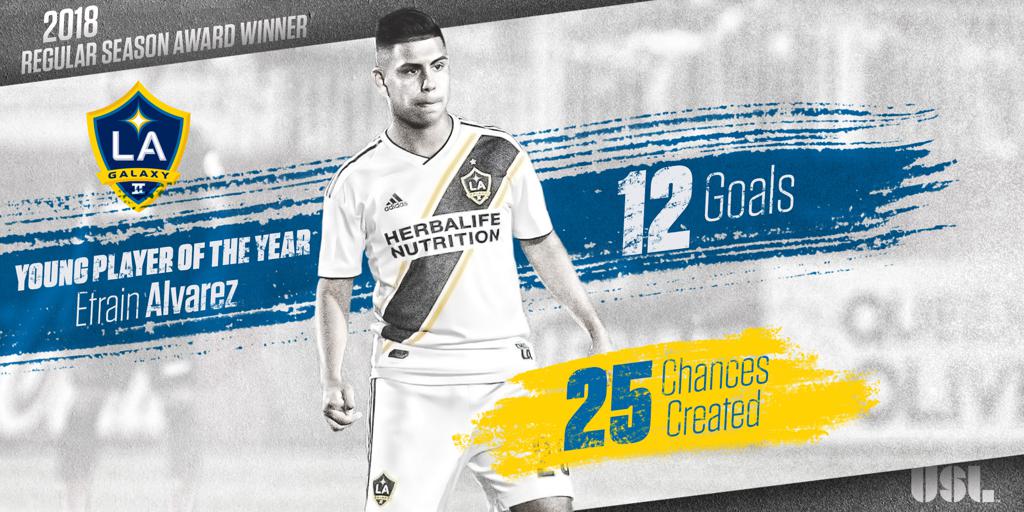 A Homegrown signing by the LA Galaxy this offseason, Alvarez finished his first full professional season with 12 goals at a rate of a goal every 103.25 minutes while also notching three assists and 25 chances created for Los Dos.

“Our club couldn’t be more proud of Efrain and the environment that we have created for all of our young talents to flourish and express themselves,” said Galaxy II Head Coach Mike Muñoz. “The LA Galaxy Academy staff, LA Galaxy II staff, LA Galaxy staff and the Mexican Federation have put everything into Efrain for him to succeed and he has taken full advantage of it.”

“He thoroughly deserves this award based on what he has produced and what he personally has accomplished with his teammates. He knows it is only the beginning and must continue to put in the work to take it to the next level.”