TAMPA, Fla. – The United Soccer League announced on Monday that FC Cincinnati center back Forrest Lasso has been voted the 2018 USL Defender of the Year. Named to the USL All-League First Team for the second consecutive season, Lasso was a key figure in an FC Cincinnati defense that helped the side claim the 2018 USL Regular Season Championship.

A USL First Team All-League selection for the Charleston Battery in 2017, Lasso made a smooth transition to FC Cincinnati’s squad this offseason as he finished third on the team in minutes played and finished first in the league overall with 223 clearances, first among defenders in aerials won with 172 and second in blocked shots with 32.

“It’s a special accolade for me personally,” said Lasso. “I think if you look at our backline, our defensive unit, our keepers, our holding mids, it took all of us. You ask anybody who plays the game, defending starts at the top, so even our 9s, 7s, 11s, they all did the job. But for me individually it’s a special moment.

“It’s something when I first entered the league back in 2015, I saw the guys that won Defender of the Year and thought I can do that. So, it’s something I’ve had in the back of my mind. But, when it came to gameday, it was the last thing I was thinking about. I was trying to think about our team success and making sure the guys to the left and right were on the same page, which at the end of the day made my job a little bit better.” 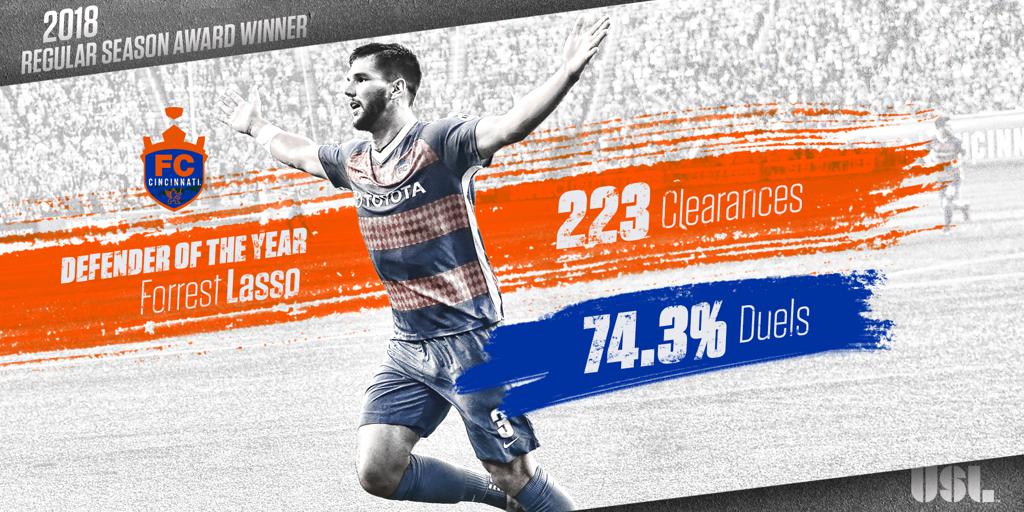 “Forrest had achieved a high level of success in the league when we brought him to Cincinnati, and we’re so pleased to see how he raised his game to become one of our club’s foundations this season,” said FC Cincinnati President Jeff Berding. “Game after game he made highlight-reel defensive moves and shut down an opposing team. No matter who he played alongside, we counted on Forrest to be a big presence and he delivered. Adding in his dedication on the training pitch, as well as his commitments in the Cincinnati community, we are so proud Forrest has been recognized as the league’s top defender this season.”