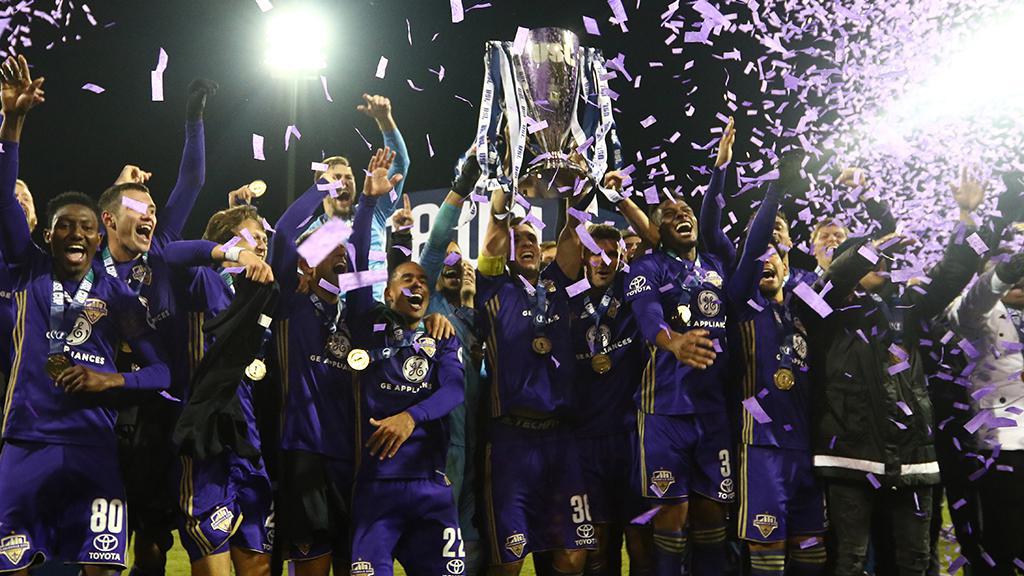 With its victory on Thursday night in the 2018 USL Cup, Louisville City FC made history as the first club to win back-to-back championships as Luke Spencer’s goal earned a 1-0 victory against Phoenix Rising FC. But where does that place Louisville’s 2018 campaign in terms of single seasons in the league’s history?

Numerically, there are some very positive numbers that make a case for Louisville being the best team in the league’s history at the point of its victory. While we unfortunately don’t have previous years to compare, Louisville stacked up a Soccer Power Index rating of 47.4 on fivethirtyeight.com. That put it six points ahead of 2018 USL Regular Season champion FC Cincinnati (41.3) in the current rankings and at No. 226 in the website’s Global Soccer Rankings.

That rating put Louisville ahead of clubs like Liga MX’s Club Leon, the English Championship’s Queens Park Rangers and Major League Soccer’s New York City FC and Seattle Sounders FC – so maybe take it with a little grain of salt – but to achieve that high a standing certainly speaks to the achievement of the side as it compiled a 10-game winning streak through the end of the regular season and playoffs while outscoring its opponents 29-5 over that span. There’s no question Louisville played its best soccer of the season when it mattered most.

On the other hand, the ELO rankings compiled by Ryan Allen of The USL Show say that Louisville’s 2018 season doesn’t quite match up with its first championship year, or that of the New York Red Bulls II in the 2016 season. New York’s double-winning season that saw the side lift both the USL Regular Season Championship and USL Cup ranks first all-time with a 1221 rating, while Louisville’s 2017 squad racked up a 1208 rating, compared to the 2018 edition’s 1205.

There’s certainly a very strong argument to be made for the 2016 Red Bulls II being considered the best team in the league’s modern era. The side lost only three times and had both the most goals in the regular season with 61 and the fewest goals conceded with 21 for a plus-40 goal differential. It notably also had two players, who since its 5-1 USL Cup victory against the Swope Park Rangers, have gone on to represent the United States Men’s National Team in Tyler Adams and Aaron Long, plus another full international in Haiti’s Derrick Etienne Jr.

Those mathematical arguments are, however, taken in a vacuum and may not factor everything that went into a club’s season, and that’s where the argument for this Louisville campaign strengthens again. As we’ve seen in the past, it’s been a far harder task to defend a championship than win it – for all of Orlando City SC’s success early in the decade, it was unable to accomplish back-to-back USL Cup victories. That alone puts Louisville in a class of its own in the league’s modern era.

There were other factors, too, including the remarkable circumstance of having Spencer, Paolo DelPiccolo and George Davis IV take over as co-Head Coaches midway through the season to fill in the gap between the departure of former Head Coach James O’Connor and his staff to Orlando City SC and the arrival of John Hackworth in August. That the side went 4-1-1 over that span said plenty about the mentality within the locker room under circumstances that would have seriously tested any side.

Five players from the Louisville side that drew with the Red Bulls II before falling in a penalty shootout in 2016’s Eastern Conference Final appeared in Thursday’s victory against Phoenix, with a sixth in 2018 USL Golden Boot-winner Cameron Lancaster sidelined by injury. Would this Louisville side get the better of Adams, Long, Etienne Jr., Brandon Allen and the rest of the Red Bulls II’s 2016 side?

You can bet they’d certainly welcome the challenge.