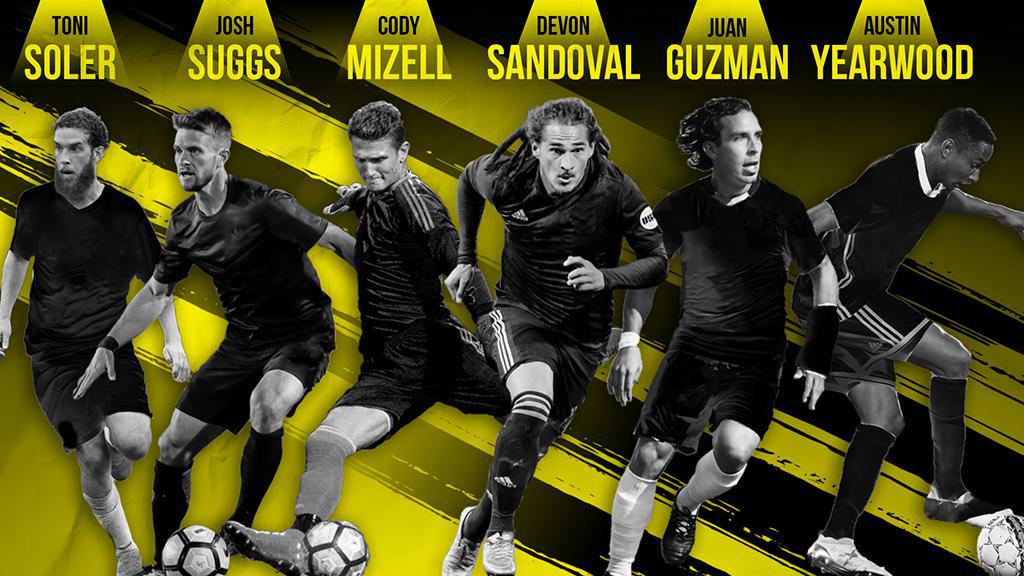 In addition to Sandoval, who was unveiled as the club’s first signing when it was launched in June, United has also signed Las Cruces native Josh Suggs, with midfielders Juan Guzman and Toni Soler, defender Austin Yearwood and goalkeeper Cody Mizell also joining the squad. The signings are pending league and federation approval.

“We are looking to determine if the player has the right mentality to fit in with the culture and environment we are trying to create. We want humble, hard-working players that are open-minded to learning new concepts,” said New Mexico United Head Coach Troy Lesesne. “Technically, our players must have a high-level of comfort on the ball, as we will look to retain possession. Tactically, a player's positional understanding both in possession and out of possession will be crucial to fitting in with our overall style of play.”

Sandoval is a former University of New Mexico soccer alum whose professional career began in 2013, when he was selected by Real Salt Lake in the second round of the 2013 MLS SuperDraft. Sandoval spent four seasons with Real Salt Lake (MLS) and made 74 appearances, scoring seven goals. Sandoval has experience with the USL, having spent time on loan with Carolina RailHawks, now North Carolina FC, and Real Monarchs SLC. Sandoval most recently finished a campaign with ATL UTD 2, where he made 25 games appearances for the first-year side. This past August, Sandoval won the USL Fans’ Choice Goal of the Week with a bicycle-kick finish against Bethlehem Steel FC.

“Devon brings a high level of attacking intelligence, along with a tremendous presence in the final third. He has a way of showing up in important moments and he is committed to bringing success to this club and our community,” said Lesesne. I'm thrilled that Devon was our first ever signing and look forward to working with him.”

Suggs joins Sandoval as a native New Mexican and brings more than 150 appearances in the USL to his new club. The veteran defender most recently played for Colorado Springs Switchbacks FC, where he was named to the 2016 USL All-League Second Team and helped the Switchbacks reach the USL Cup Playoffs in both 2015 and 2016. Suggs has recorded eight goals and 19 assists in his USL career, which has seen him log more than 13,000 minutes of action.

“Over the last four seasons in the USL, Josh has started and played virtually every minute, so he's an extremely dependable and important signing for our club,” said Lesesne. “I love his ability to time his arrival into attacks and defensively he makes the opponent work for everything. He's a leader that looks to put the club first, and I'm so happy to have him joining New Mexico United.”

Guzman is a native of Bogota, Colombia, and played four years of college soccer at Liberty University, where he was twice selected to NSCAA All-South Atlantic Region team, as a sophomore in 2007, and as a junior in 2008. During his college years, Guzman also played for the Southern California Seahorses in USL League Two. Guzman began his professional soccer career in 2010, when he signed with the USL’s Charlotte Eagles. In 2015, Guzman played for Louisville City FC, and in 2016, Guzman signed with Colombian team, Patriotas F.C. In 2017, Guzman signed with the OKC Energy FC, where he recorded 29 appearances and two goals.

“Juan is one of the most reliable players in the USL,” said Lesesne. “He's calm and composed in possession and has an incredible ability to break things up defensively and intercept passes. He's a leader by example and I'm excited to work with him.”

A Georgia native, Mizell was a nominee for the 2016 USL Goalkeeper of the Year award with the Charlotte Independence, where Lesesne was an assistant coach at the time. This past season he competed for the Tampa Bay Rowdies and has seen more than 5,000 minutes of action in the USL during his professional career since attending Clemson University. For the Tigers, he was the starting goalkeeper for all three seasons, winning All-ACC Freshman Team honors in 2010 and All-ACC Second Team honors in 2011. Mizell was also an All-ACC Academic Team selection in 2011 and 2012.

“Cody is one of the most competitive players I've coached at the professional level. What I love about his mentality is that it raises the standard for the entire team,” said Lesesne. “He solidified himself in 2017 as one of the top goalkeepers in the league, and I'm looking forward to seeing him achieve this level again in 2019.”

Soler will join the professional ranks with New Mexico United, with the native of Valencia, Spain having competed collegiately in the United States and both Adelphi University and the University of Tampa. He also competed for the past two seasons with then-USL League Two side South Georgia Tormenta FC, where he helped the side claim the Deep South Division this past summer.

“Toni is a player coming off a very successful collegiate and PDL career. He's a cerebral player who understands how to bring his teammates into the game, and he knows how to control the tempo of a match,” said Lesesne. “I'm excited to see Toni make a big impact in his rookie season with our club.”

Yearwood has played for the past four seasons in the league, most recently featuring for the Richmond Kickers after previously playing for the Charlotte Independence in his hometown of Charlotte, North Carolina. A former standout at High Point University from 2012 to 2015, Yearwood was named to the All-Big South First Team while with the Panthers.

“Austin brings a mix of athleticism, versatility, and quiet competitiveness that will add serious value to our team each and every day. He is very difficult to beat 1v1, and his ability to recover is off the charts,” said Lesesne. “I had the pleasure of working with him in Charlotte in 2016 and 2017, and to be able to work with him again is an honor.”