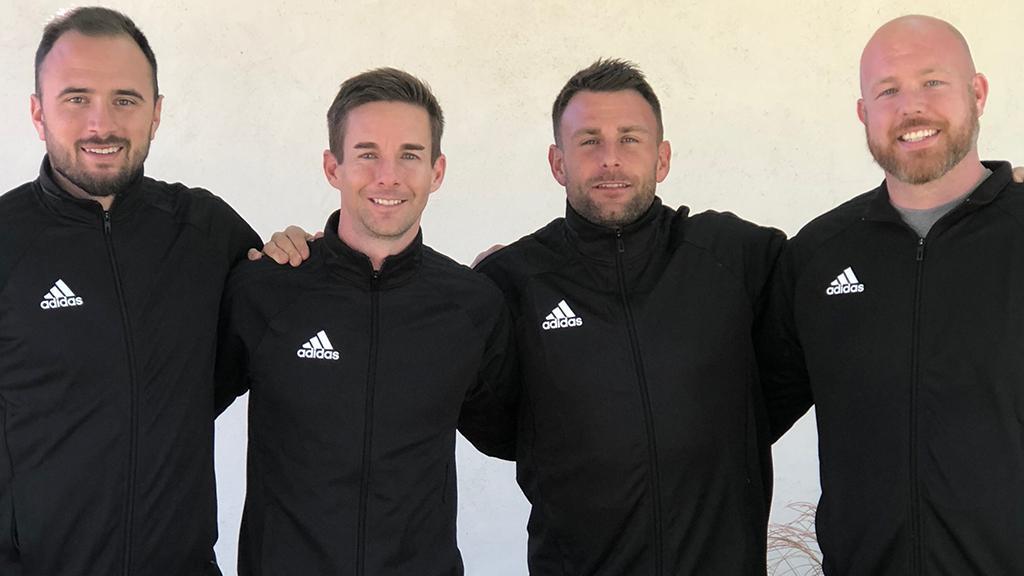 “Brandon, Joel, and Zach each bring a unique skill set to our club and are the type of people I can depend on to help me establish a winning culture and environment for New Mexico United,” said Lesesne.

“We are so excited to bring this extremely talented and proven technical staff to New Mexico. Coach Lesesne has been out in our community every day, whether he’s coaching a youth clinic for one of our local clubs or meeting up with our Supporters’ group,” said New Mexico United Owner Peter Trevisani.  “With Brandon, Joel and Zach in place, we will be building a team that the people of New Mexico will be proud of, on and off the field.”

Morris previously served as the Director of Soccer Operations of current USL Cup holder Louisville City FC. Morris joined LouCity in February 2015, on the first official day of preseason in the club’s inaugural season and was with the club when it was crowned the 2017 USL Cup champion last November.

“I'm excited to be joining the technical team here in New Mexico,” said Morris.  “Troy has built a great staff and I believe we will put a product on the pitch that the city and state can be proud of.”

Before his time with City FC, Morris spent six years as a special education teacher at Calloway County Middle School. During this time, he was also the head soccer coach for the Calloway County varsity squad.  Prior to that, Morris was the associate director for the USL’s Super Y League.

Tyson served as Goalkeeper and Assistant Coach with the Charlotte Independence alongside Lesesne for the past two seasons, during which time he helped the club reach the 2017 USL Cup Playoffs.

“Troy’s passion and leadership, combined with Peter’s energy and vision, make New Mexico United an incredible opportunity that I am eager to be involved with,” said Tyson. “Their desire to bring the entire state of New Mexico together under the umbrella of the world’s game gives this opportunity a bigger meaning, beyond the game itself. I’m proud to be a part of this organization and look forward to contributing to this team and city any way possible.”

Prior to coaching professional soccer, Tyson was involved in coaching college soccer for 10 years, as well as playing collegiately at Coker College in Hartsville, S.C.

“Joel has been fantastic here,” said Charlotte Independence Head Coach Mike Jeffries. “He's done a tremendous job with the goalkeepers and I think they've all walked off feeling like they've improved and enjoyed the day-to-day, which Joel is very passionate about. Within the group, he was a fantastic assistant in terms of his ability to relate to the players. Joel is extraordinarily organized and was a big help in a lot of the administrative and organizational aspects. All those are characteristics that we'll definitely miss.”

A former USL Cup-winner with the Charleston Battery in 2012, Prince most recently served as the Junior Academy Director of United PDX, a United States Soccer Development Academy located in Portland, Oregon. Before his coaching and instructional career, Prince spent seven years as a midfielder with the Battery, with whom he also claimed the 2010 USL Second Division championship. Known for his competitive, physical style of play, Prince netted nine goals in 162 appearances for Charleston.

“I am honored to be part of the inaugural New Mexico United coaching staff. It is a great opportunity for me to learn and grow under Head Coach Troy Lesesne,” said Prince. “I look forward to helping our team make a positive impact on the field and in the community.”

Prior to joining the Battery, Prince played four years for the College of Charleston Cougars. During his college years, he also played in USL League Two with both the Colorado Rapids U23 and Chicago Fire Premier, and helped the Fire Premier reached the 2009 League Two Final.