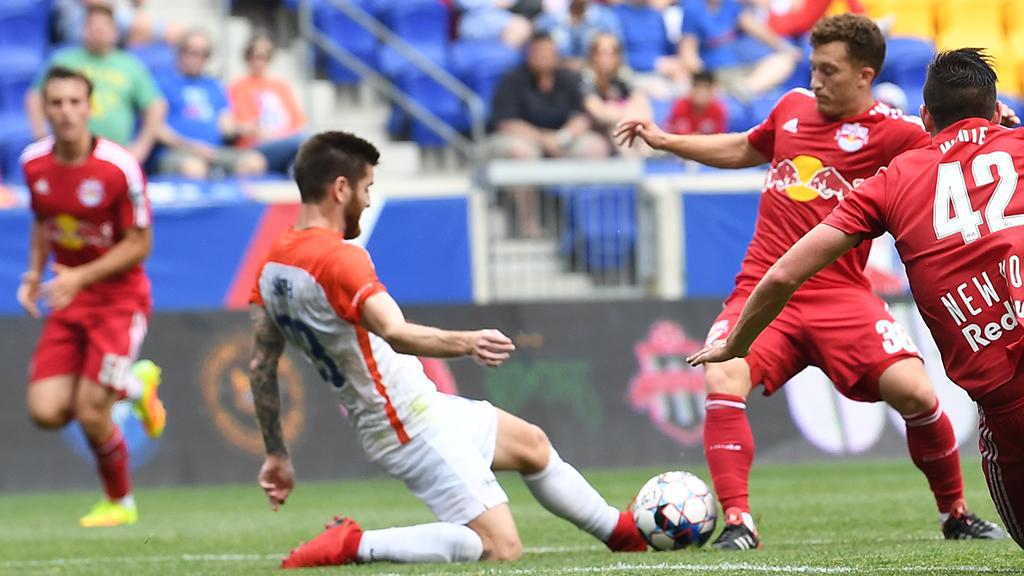 Already trailing to an early goal at Red Bull Arena by New York’s Amando Moreno, the visitors conceded a penalty just past the hour-mark and were facing a two-goal deficit against one of the best home teams in the USL.

“At that time, I remember thinking, honestly, I hope he misses it,” said FCC midfielder Nazmi Albadawi. “That penalty was a big moment in that game, so with us being down against them, we really wanted him to miss that penalty.”

Albadawi’s wish was granted as Brian White skied his shot over the crossbar, and the moment proved pivotal to the game’s direction. Three minutes later Emmanuel Ledesma produced a curling finish to the left corner of the net from a tight angle on the right side of the penalty area to bring FCC level, and Danni König’s winner 13 minutes from full time sent the visitors home with its first road win all-time against the Red Bulls II.

There’s no doubt that the missed penalty kick provided a turning point in that contest, but there’s an argument that combined with Ledesma’s prompt equalizer it might also have provided a key moment in Cincinnati’s season. That victory against the Red Bulls II was the first game in the club’s current 24-game undefeated streak in league play, and as New York comes to visit Cincinnati this Saturday afternoon in the Eastern Conference Semifinals of the 2018 USL Cup Playoffs at Nippert Stadium (4 p.m. ET | Match Center | ESPN+) the memory of the launch-point of Cincinnati’s current streak is still relatively fresh for the side.

“To be honest, it’s hard to look back, all the way back then and say because of one thing, that’s why,” said Albadawi. “We come in every single day to training focused on getting better and focused on getting prepared for the weekend, and I think that’s what really has helped us make this run, because every single day we come into training, we’re trying to get better. Every single game we play in, we want to win, no matter what. No matter who we’re playing, no matter where we’re playing, we want to come away with the victory.

The postgame message from Head Coach Alan Koch might be the most abiding memory for the players of that game, certainly. While happy that his side had fought through to earn a valuable three points on the road, the performance certainly wasn’t what Koch had been looking for in terms of consistency.

“Coach was happy because we were winning, but angry with the way we played,” said Ledesma. “We struggled a lot in the first 45 minutes, so when we won the game he said, ‘sometimes you can still play a bad 45 minutes, but when this team is focused and connects with each other, you can still win the game.’

“At that moment we realized the situation, and we were working really, really hard a little bit more, and then we started playing better and better. … We learn from the past, but we don’t think too much about the past, we’re just working hard for the game on Saturday, not what happened last weekend. That’s the way this team works.”

That ability to remain forward-thinking has been led by Koch, whose exacting nature is a major reason why Cincinnati has not only claimed its first silverware in club history but is also the leading contender to lift the USL Cup in three weeks.

“Coach holds us to a high standard,” said Albadawi. “There’s been a few games this year where we’ve won, and we’re happy that we’ve won, but we’ve still known we could play better as a group. We hold ourselves to a very high standard as well, so it’s not only about winning. Of course, we want to win every single game, but we want to win while playing well as well.” 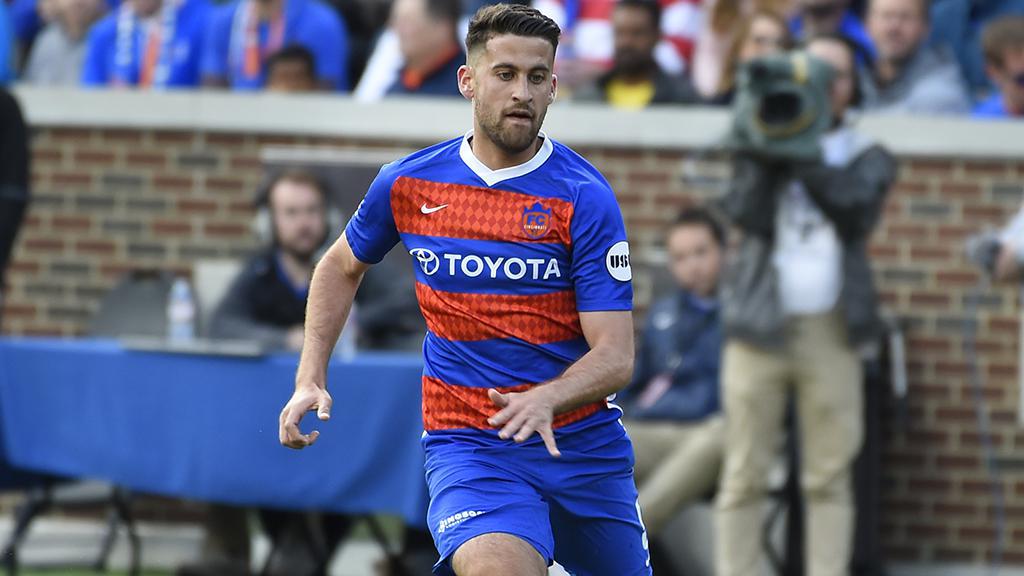 FC Cincinnati midfielder Nazmi Albadawi is one of four players on the team to have reached double-digit goals in the regular season. | Photo courtesy Brett Hansbauer / FC Cincinnati

Coming out with a victory against a side like the Red Bulls II certainly could be a challenge for Cincinnati, let alone doing so in the sort of style that has produced four double-digit goalscorers this season, but that aspect of the matchup in a playoff atmosphere is one that could heighten the intensity between two clubs that have developed a good history over the past three seasons.

With New York looking to reach the Eastern Conference Final for a third successive year, and in doing so end the streak that began against them on June 2, the pressure is going to be on the hosts to come away with another victory.

“They are younger, they are working so hard and it’s going to be very difficult for us, but it’s the same thing we do away and at home,” said Ledesma. “We work really, really hard, be compact, work together and then try to pull everybody the same way to win this game on Saturday.”

The sense of occasion that comes with a game like this, however, is the reason why Ledesma, Albadawi and the rest of Cincinnati’s squad are eager to bring their best when they step out on Saturday afternoon.

“Because we are a club like this, because we are FC Cincinnati and we have a huge crowd and everything, everyone wants to come into our home and beat us, everyone we play against, so that’s something you have to take pride in being part of this club,” added Albadawi. “We know that everyone’s coming here to beat us, and there’s extra motivation for them because they’re a club that’s done very well in USL, been to the Eastern Conference championship the last two years, so they want to come out here and prove a point. For us it’s proving a point that we belong and that we’re the best team in the league and beating a very good team like New York is the best way of doing that right now.”