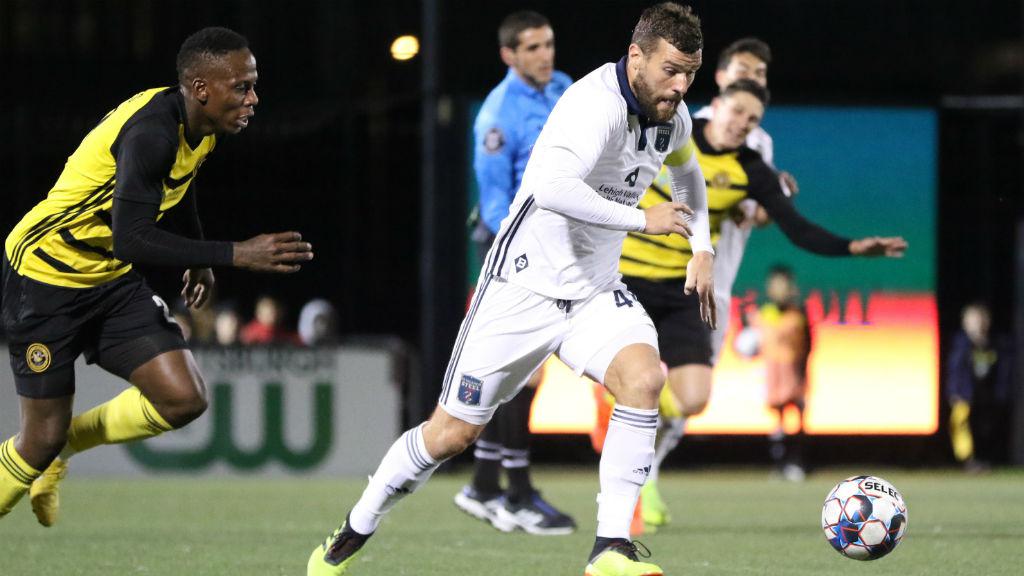 PITTSBURGH – Trailing No. 3-seed Pittsburgh Riverhounds SC by a goal with just 11 minutes of extra time remaining to save its season, Bethlehem Steel FC turned to veteran midfielder James Chambers for a moment of inspiration.

The club captain delivered, curling a venomous free kick from the top of the penalty area past Dan Lynd via the goalkeeper’s right-hand post to tie the Eastern Conference Quarterfinal matchup at two goals apiece.

Chambers’ strike sent the game to a penalty shootout, where the 31-year-old Irishman again stepped to the forefront. Chambers made the lonely walk to the spot to take his side’s first penalty kick and fired a right-footed effort into the top-left corner of the net that narrowly evaded the arms of an outstretched Lynd, who had guessed the correct side.

“After hitting the back of the net in extra time, I was a little bit more confident,” Chambers said of the spot kick. “I normally go first in shootouts anyway when the opportunity arises, and I just felt as captain, having a young group, that I’d go first and hopefully I’d score, and it would settle the nerves down maybe for some of younger guys.”

The strategy worked to perfection as Steel FC’s next seven penalty takers – which averaged 22.57 years of age – held their nerve and converted to give Bethlehem an 8-7 shootout victory on Saturday night at Highmark Stadium.

Chambers praised his side’s determination to not just come back in extra time, but in regulation as well with USL 20 Under 20 standout Michee Ngalina cancelling out Ben Zemanski’s first-half strike in the 70th minute.

“We’ve been down late in games this season and we’ve come back and taken three points and a point at times,” said Chambers. “We certainly have a belief that we’re not dead or we’re not buried at any stage in any game. We were quite confident that we’d get back into the game. Obviously, you don’t have loads of time, especially in extra time, but we were pressing, and we were causing trouble to Pittsburgh and I think we got what we deserved in the end.”

Steel FC Head Coach Brendan Burke said the club’s first playoff victory was a big step in the right direction and he was proud of his side’s grit in a do-or-die situation away from home. He also singled out the efforts of his captain, who has been a leader by example throughout the club’s three USL seasons, recording 13 goals and five assists in 83 appearances.

“James had his best day at the right time for us, so just really happy for him because he works so hard in helping to develop the other guys in the group,” said Burke. “It’s been one of those situations where he’s had some frustrating times with us and deserved everything he got through the course of that game to kind of be the focal point of it.”

Burke described Chambers as “a coach, who also doubles as a high-quality player” and praised his off-field qualities as much as his skillset in the center of the park. He said that Chambers has been vital in reinforcing the coaching staff’s messages and helping his younger teammates integrate into the professional game.

“He holds people accountable and accountability is one of the first hard lessons for young pros sometimes,” Burke said of Chambers. “Being able to show up and train hard in that high intensity every day and manage your body on and off the field is something that as our Academy players are introduced to our environment and we start to ask them to play in games and to actually be competitive in those games and not just take part, James is the best teaching tool we have because he does it by example.”

Chambers said he enjoys the role and responsibility he has within the organization and above all, is happy to see his side’s efforts begin to pay off. Bethlehem is unbeaten in its last five games and will try to keep its postseason run going when it travels to Slugger Field for a rematch against reigning USL Cup champion Louisville City FC on Saturday (7:30 p.m. ET | Match Center | ESPN+).

Louisville cruised to a 4-0 home victory over Bethlehem in the Eastern Conference Quarterfinals last season on its way to claiming the championship. Chambers admitted that Steel FC was “convincingly beaten” in that match, but feels his side learned from that experience and doesn’t expect that result to have much of a bearing on Saturday’s contest.

“I think it’s a new season, it’s new teams, it’s new players on both sides, they have a new coach,” said Chambers. “I do think it’s going to be a different game to be honest, but we do still have to give them credit that they finished second in the league and well above us, so we’ll give them credit, but we won’t go there fearing them by any stretch of the imagination.”

Louisville certainly still poses a threat under new Head Coach John Hackworth, as the East’s No. 2 seed enters the contest having won seven straight games and all eight of its previous playoffs matches on its home turf.

Burke, who served as an assistant under Hackworth with the Philadelphia Union until the end of the 2013 season, believes the No. 1 priority for his side this weekend is defensive accountability, especially from set pieces. Louisville converted three times from dead-ball situations in its 4-1 opening-round victory over Indy Eleven last Saturday and former LouCity defender Tarek Morad scored from a pair of training-ground routines in the first half of last year’s playoff meeting to put Steel FC squarely behind the 8-ball.

Burke is hoping that his side can put on a better display this time around when he coaches against his former boss for the first time.

“I would run out of time to talk about how important he was to my development,” Burke said of Hackworth. “But to stand across from him now, I think the best way to respect him is to give a good account of myself as a coach and to respect the occasion, respect the game and with whatever’s at our disposal this weekend – which we’re still not entirely sure what that’s going to be – we have to go and put on a good performance.”

Bethlehem’s squad may look different when it takes the field against Louisville, as teenagers Anthony Fontana and Matt Real are question marks for this weekend’s match after being called up by the U.S. U-20 Men’s National Team for the upcoming Concacaf U-20 Championship in Bradenton, Fla. The pair may meet up with the squad in Louisville, but there is also a possibility that the Union first-team will send some players to help out if they don’t.

While Burke doesn’t know what his starting eleven will be yet, he is confident in his side’s ability to adapt for this crucial match after rotating players in and out of the lineup all season long.

“We as a club, in general, want to represent ourselves well in this game, but the reality is we’ve played 35 lineups in 35 games and that ain’t changing.”