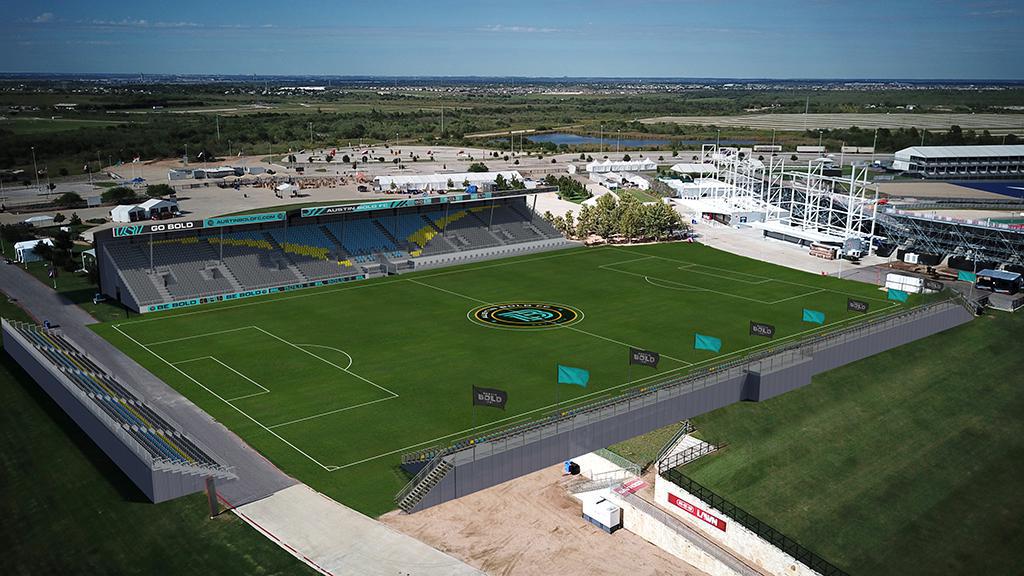 Bold Stadium will hold 5,000+ fans and be ready for play at the start of the 2019 USL season. | Photo courtesy Austin Bold FC

The 5,000+ seat venue, to be located adjacent to the Grand Plaza at Circuit of The Americas, has been engineered with the soccer fan and soccer player in mind and is scheduled to be completed before the start of the club’s inaugural USL campaign next Spring.

Bold Stadium will feature a covered grandstand – designed to provide optimal shade for fans – and each seat will have a chairback to ensure a comfortable game-watching experience. The home and visitor locker rooms will be located under the stands, making the players’ entrance onto the pitch a moment of maximum excitement for fans and players alike.

“The Austin soccer community is passionate about the sport, and we’re committed to building a stadium and offering a fan experience that’s exciting, enjoyable and affordable for families and close to the action,” said Bobby Epstein, Chairman of Austin Bold FC. “We’ve also gone to great lengths on the technical design and quality of the field we’re installing. This will be a premier pitch, where veteran players and future stars alike will want to compete.”

Austin is proving to be an attractive destination for players as the club announced the signing of veteran midfielder Xavier Báez for the 2019 season on Wednesday, pending league and federation approval.

Prior to joining Austin, Báez spent 11 seasons with four clubs in Liga MX, the top division of the Mexican football system, including six seasons with Club Deportivo Guadalajara. In 205 matches with Chivas, the defensive midfielder scored 11 goals and registered 16 assists.

The native of Reynosa, Tamaulipas, Mexico spent his youth career with the C.D. Guadalajara Reserves and Academy before moving to the Chivas senior club in 2007. While with Chivas, Báez was a member of the 2009 InterLiga Championship team and the 2010 Copa Libertadores de América runner-up squad.

After a loan to Deportivo Toluca FC in 2013, he moved to Cruz Azul for the 2014-15 season, helping the club to a fourth-place result in the 2014 FIFA Club World Cup in Morocco, before starting a two-year run with Club Necaxa in 2016. In 350 career matches, Báez has netted 12 goals with 23 assists.

“Austin Bold FC is well on its way to having a talented side and fantastic stadium that we’re confident will take the USL, and the soccer world, by storm,” said USL CEO Alec Papadakis. “Austin is a dynamic and thriving city and we look forward to an exciting inaugural season there this spring.”