NEW YORK – Taking an existing logo with historical and sentimental value and upgrading it to fit a company’s new vision isn’t an easy task.

So, when the USL began the process of creating a new structure and identity system for each of its top three leagues, it enlisted the Brooklyn-based creative studio, Athletics NYC, to help.

Athletics, which also worked on Major League Soccer’s recent rebranding initiative, employs strategy, design and technology to help its partners navigate the future of commerce, culture and behavior. In this case, lead project designers Malcolm Buick and Landry Miller were tasked with helping the USL bring its three leagues under one central brand and convey a new and inspiring direction for the league.

Before starting the design process, the pair immersed themselves in the league and spoke at length with USL CEO Alec Papadakis and President Jake Edwards to address the organization’s needs and goals for the project.

“Half of it was just understanding from Alec and Jake what the new system really needed to do, where it needed to show up, especially with the new frontiers of this corporate level and the league levels and how those operate with each other,” said Miller. “So, before we just started jumping into the design, it was a good amount of rationale and understanding when and how to inform that.”

After spending countless hours on calls with league executives and the USL’s in-house design team, Buick and Miller began to see the USL as more of a channel than a soccer league. They felt that the USL brand needed to be able adapt to serve various functions, ranging from the creation of motion graphics for ESPN’s live-game broadcasts to highlight packages on social media platforms.

Behind the Brand: At Work with Athletics NYC

Athletics NYC brought the concept of the USL's new identity to life in its studio in Brooklyn.

With that know-how, the pair was then able to kickstart the creative process.

“We moved into a design phase where we design quite broadly initially, sketching and doodling and we brought the USL team into the fold on that,” said Buick. “They got to see some early points and we’re not just decorating at that point for the fashion, we’re decorating with intent, so it comes from a place of strategy.”

A major part of that strategy was simplification, as each of the league’s logos had to be adaptable for the USL’s various content platforms while also fitting nicely on team jerseys.

“What we did was pretty much strip everything down to the bare bones and we were left with really the watermark, the icon.” said Buick. “We used that design point to kind of build a system that would wrap around it. That was the heart and soul of it and we added additional elements.”

One of those elements was color as the traditional, dark blue USL logo took on a new look for each of its three leagues. The USL Championship features a black and gold color scheme – representing the ultimate goal for its players and coaches – while USL League One took on a brighter shade of blue and USL League Two maintained its PDL heritage with a bold, red logo.

Athletics’ design team also incorporated a new font style and boxed framework for each of the entities and made some creative additions to the USL’s corporate logo to match the league’s philosophy.

“Early on, it was pretty clear that it would be great if this, at least on the corporate level, signaled the change that this whole restructure was all about moving soccer forward in the United States,” said Miller.

That idea eventually came to life in the form of a white sphere in motion – representing a soccer ball that propels the sport forward – and the incorporation of 13 stripes as a tribute to the U.S. flag. 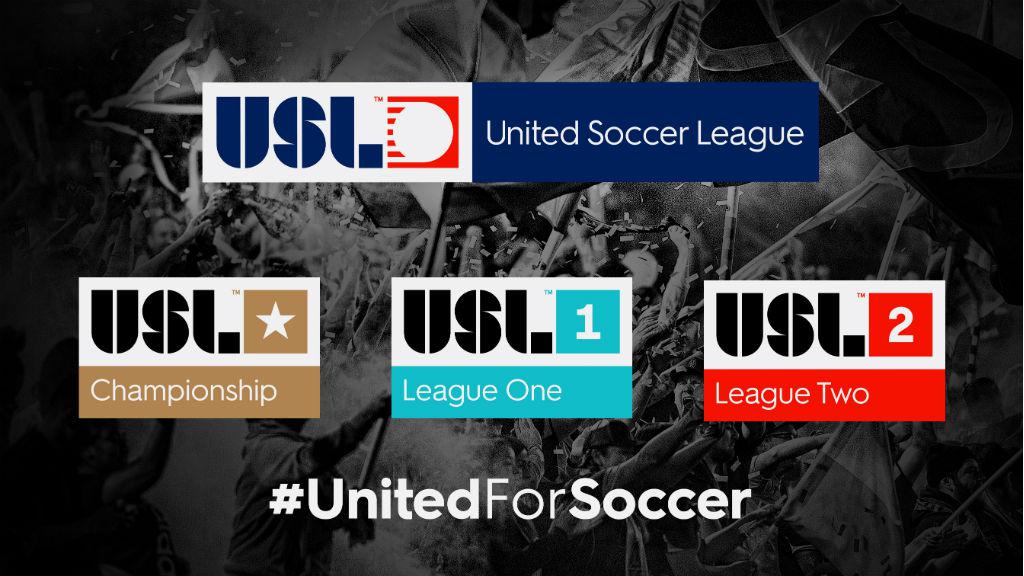 The USL unveiled its new brand identity on September 28.

As each of the logos began to take shape, Athletics’ design team started to maneuver them into the larger identity systems. That process involved testing the logos in motion, looking at them on social media platforms – such as Instagram and Twitter – and looking at them in various linear design patterns.

“The logo is just one part of it,” said Buick. “I think that’s a misperception a lot of people have. A logo is the icing on the cake.”

In addition to surrounding the logos with these larger identity systems for the USL to put into use on its content platforms, Athletics also established some guiding principles for the league’s design team to follow as it adjusts the designs in the future.

“They can take that and run with it and develop it,” said Buick. “And it will change, and it’ll get fine-tuned and that’s the part of a living, breathing brand identity and that’s actually what we delivered.”