CINCINNATI – The moment Nashville SC’s Justin Davis’ penalty kick sailed over the crossbar, the FC Cincinnati players that had been arm-in-arm in the center circle began to rush toward goalkeeper Spencer Richey in celebration.

There was just one problem. Cincinnati still had to score on its sixth-round penalty to advance.

“That could’ve been a disaster,” said Richey with a laugh on Saturday night. “I was aware that we needed to score the next one, but I mean, I don’t know.”

Richey visibly pointed his teammates back to bring the premature party to an end before he took his place to the right of the goal as Kenney Walker stepped forward for the hosts. A low shot to the right corner by the FCC original later, though, and the celebration was on for real, the No. 1-seed hosts having survived a 6-5 shootout victory against No. 8-seed Nashville in the Eastern Conference Quarterfinals after 120 minutes between the sides had left them all square.

After the tension that had come before, Walker’s goal to send the side through to the Eastern Conference Semifinals for the first time in the club’s history provided a breakthrough moment for a side that had fallen at this stage for the past two years.

For Walker – who had scored his lone penalty kick in the regular season in the side’s 3-2 victory against Indy Eleven on May 2 but had missed in the club’s penalty shootout defeat to Minnesota United FC in the Lamar Hunt U.S. Open Cup on June 6 – the chance to send the side through brought pressure, but the sort a player of his experience welcomes.

“It was a little added pressure, but at the same time, you’ve got to go out and score,” said Walker. “Either you pick your spot and put it there and he saves it, or you beat him to your spot. That’s as simple as you can put it. There’s still pressure on it.”

“We’ve worked with Kenney for a long time, and you can see he’s a very composed player when he’s in possession of the ball in the open game, and he’s the exact same way when he takes a penalty kick,” added FCC Head Coach Alan Koch. “But, to have the bravery, that’s not easy. For an Ohio kid to come in and score that penalty kick for us tonight is absolutely awesome.” 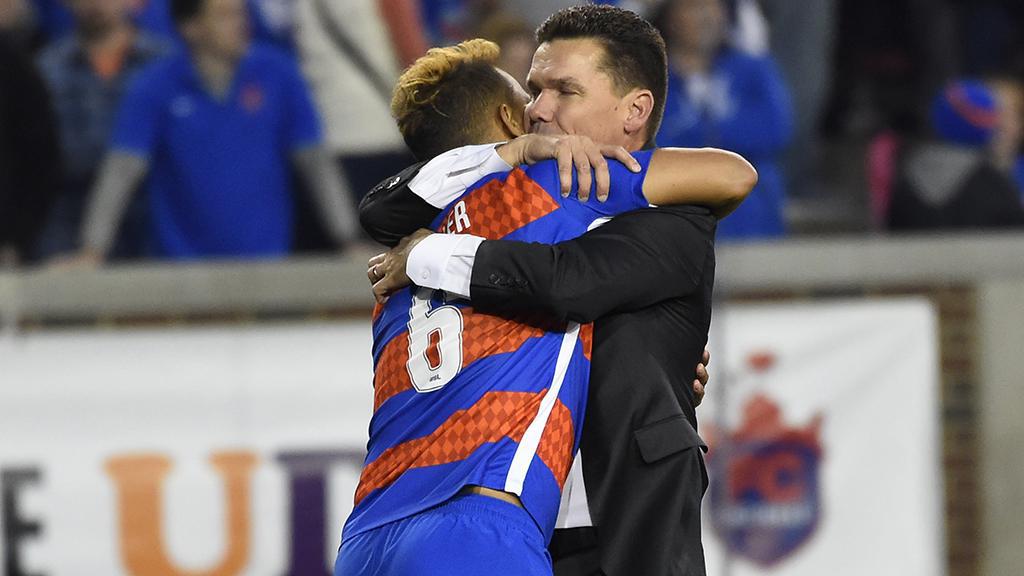 That the game reached a shootout was in part due to Richey’s performance in the first 120 minute as the goalkeeper came up with numerous saves to keep Nashville from opening the scoring in its bid to end FCC’s season in the Eastern Conference Quarterfinals for a third consecutive year. Preferred over USL Golden Glove-winner Evan Newton, Richey paid back the confidence Koch showed in him with crucial stops in both the opening 90 minutes and extra time to keep Cincinnati from having to endure the added pressure that would have come from falling behind.

And after the misses of Walker and others had seen FCC lose out in a penalty shootout earlier this year in the Lamar Hunt U.S. Open Cup against Major League Soccer’s Minnesota United FC when Richey was also in goal, the shot-stopper was thrilled his teammates were able to come through in the biggest game to date of its final season in the USL.

“[There was] definitely more pressure [tonight],” said Richey. “I feel like the Open Cup is obviously a competition that we want to do well, and we want to advance in, but something about tonight felt like it had a different buzz to it. I was really eager to try to keep one or two of those penalties out to try to take some pressure of our guys, but I wasn’t able to do that. Luckily they banged in six-for-six.”

With the prospect of a clash with the No. 5-seed New York Red Bulls II now to come on Saturday afternoon at Nippert Stadium (4 p.m. ET | ESPN+), all that matters now for the side is that it continues its progress toward the USL Cup.

“[I] said to our players all week long, said to them before the game, said to them at the end of the game tonight: ‘doesn’t matter if you win in 90 minutes, 120 minutes, penalty kicks, sixth penalty shooter … as long as you win,’” said Koch. “I thought we deserved to win in 90 minutes. I thought we deserved to win in the 120 minutes. Penalty kicks is a lottery. I’m glad we won and move on to the next round.”