USL Cup Playoffs - Who to Root For - Dark Horses 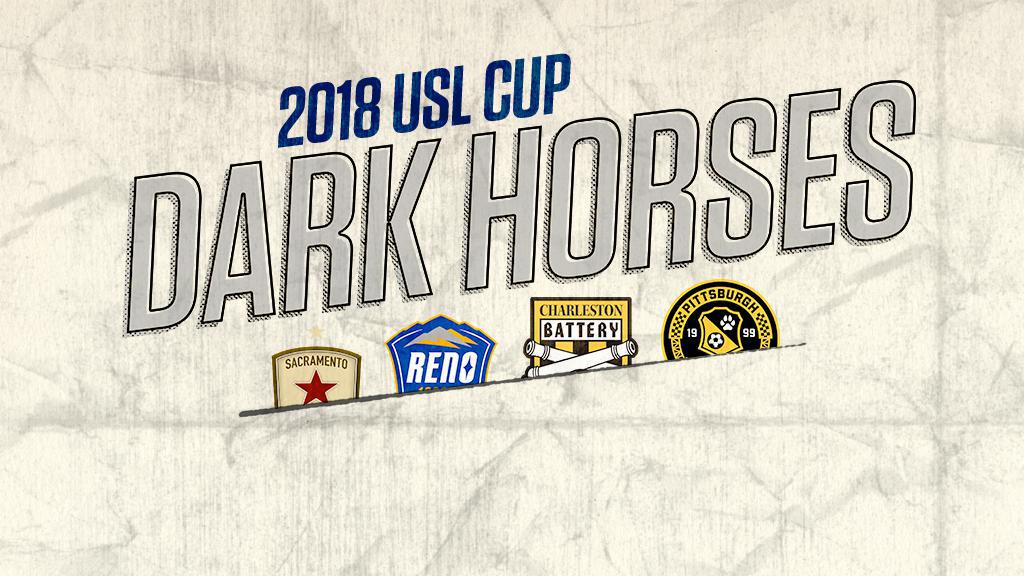 Continuing our series ahead of the start of the 2018 USL Cup Playoffs this Friday night that looks at the teams in the postseason field, we cast an eye to a group of sides that likely have championship expectations inside their camps, and could be teams to keep an eye on if the favorites should falter on the road to the USL Cup.

Player to Watch: Kenardo Forbes. In his first season with the Hounds, the 30-year-old Jamaican has been a calming and creative presence in the Pittsburgh midfield. Forbes led his side with 56 chances created and eight assists, while also helping break up the play by winning 39 tackles and 152 duels. Forbes brings a veteran know-how and postseason experience – including a USL Cup win under Pittsburgh first-year Head Coach Bob Lilley – to a club that hasn’t won a playoff game in the USL’s modern era.

NBA Comparison: 2017-18 Boston Celtics. After making the Eastern Conference Finals the season before, the Celtics undoubtedly had higher expectations than Riverhounds SC but both teams based their regular-season success on strong defensive play. Boston allowed the fewest points per game of any team in the East (100.4) and limited opposing offenses to 2.5 fewer points than the conference’s next best defense (Miami) as the side earned a second-place finish. The Celtics were an efficient offensive team but didn’t have the firepower to overcome LeBron James’ Cleveland Cavaliers – especially after injuries to Gordon Hayward and Kyrie Irving – as Boston fell in the East Finals for a second straight season.

Pittsburgh Riverhounds SC returns to the postseason for the first time since 2015, when the side lost two separate leads before eventually falling after extra time to the New York Red Bulls II. Pittsburgh has failed to win a playoff game in the USL’s modern era, making first-round exits in 2011 and 2013 in addition to its heartbreaking loss to New York. Things may be different this time around, however, as Pittsburgh boasts an experienced squad that posted the league’s top defensive record, allowing just 26 goals and keeping 17 clean sheets this campaign. On the offensive end, the Hounds rely on Neco Brett to find the back of the net as the forward played a part in 46.8 percent of his side’s goals this year – scoring 15 and assisting on seven of the Riverhounds’ 47-goal haul.

This is your team if: You like a hard-nosed squad that is well-organized at the back but can still produce a moment of quality in the final third.

Player to Watch: Cameron Iwasa. The 25-year-old forward played a part in nearly half of Sacramento’s 47 goals this season, scoring 17 of them and assisting on six more over 34 appearances to lead the team in both categories. No other Republic FC player contributed more than five goals or five assists this campaign.

NBA Comparison: 2014-15 Atlanta Hawks. After concluding the previous season as the No. 8 seed in the East, these Hawks made tremendous strides to post a 60-22 record and finish atop the conference. Atlanta wasn’t as reliant on one player for its offense – as Jeff Teague, Paul Millsap and Al Horford each averaged between 15 and 17 points per game – but the Hawks finished second in defense, surrendering just 97.1 points per contest. Atlanta relied on that defensive prowess to advance all the way to the Eastern Conference Finals, where the side was swept by LeBron James and the Cavaliers.

Republic FC, like the Hawks, was the No. 8 seed in its conference last postseason but Sacramento managed to do some damage from that position as it knocked out 2017 USL Regular Season champion Real Monarchs SLC in a penalty shootout before falling to the Swope Park Rangers. Republic FC will be hoping for a deeper run this time around as it attempts to match its USL Cup success from its inaugural season in 2014.

This is your team if: You want to see a quality goalkeeper influence a game. Despite allowing just 32 goals this season, Sacramento’s Josh Cohen was one of the busiest netminders in the USL as he made 117 saves in his first year with Republic FC.

Player to Watch: Taylor Mueller. The 30-year-old center back anchored the Battery’s back three and helped his side to the league’s fourth-best defensive record, as Charleston conceded at a goal per game rate (34 goals in 34 matches). Mueller led the team with 165 clearances, 25 blocks and helped the Battery build its attack from the back by completing 91.5 percent of his passes.

NBA Comparison: 2008-09 San Antonio Spurs. The Spurs are an easy comparison to Charleston as the NBA’s model of consistency, having reached the postseason in 21 straight seasons. This specific San Antonio squad finished third in the West and featured a top-five defense to complement Tony Parker’s team-leading 22 points per game. The Spurs finished the year with a 54-28 record but dropped their first-round matchup to Dirk Nowitzki’s Dallas Mavericks in five games.

The Charleston Battery are back in the USL Cup Playoffs for the eighth consecutive campaign as they remain the only franchise to reach the postseason every year in the USL’s modern era (since 2011). The Battery haven’t necessarily translated that consistency into success though, as the club has failed to reach the USL Cup since claiming its only championship in 2012. This year’s Charleston squad will look to change that and exact a matter of revenge against a New York Red Bulls II side that handed it a 4-0 defeat in the opening round of the 2017 USL Cup Playoffs on its home turf at MUSC Health Stadium.

This is your team if: You typically support a perennial playoff contender or like to see strong defensive sides prevail against high-powered offenses.

Player to Watch: Antoine Hoppenot. The 29-year-old was a constant threat in Reno’s attack, leading his side with 13 assists and 59 chances created – 20 more than any of his teammates. Hoppenot also found the back of the net five times in 32 appearances this campaign and scored twice in 1868 FC’s regular-season finale against top-seeded Orange County SC.

NBA Comparison: 2008-09 Houston Rockets. After losing in the first round of the postseason as a No. 4 seed the previous year, Houston put together another solid campaign as Yao Ming, Tracy McGrady and Metta World Peace averaged over 15 points per game to lead the side to a fifth-place finish in the West. The Rockets boasted one of the NBA’s top-ten defenses – allowing just 94.4 points per game – and advanced to second round of the playoffs with a series win over the Portland Trail Blazers before falling to the eventual NBA champion Los Angeles Lakers in seven games.

Reno’s inaugural campaign a year ago culminated in a third-place finish in the Western Conference but the side failed to translate that into postseason success as 1868 FC fell 1-0 on its home turf to OKC Energy FC in its USL Cup Playoffs debut. Like the ’09 Rockets, Reno enters the postseason as a lower seed this time around but will be hoping to replicate Houston’s success by getting past Real Monarchs SLC in the opening round. If it manages that, 1868 FC could be a threat to any Western Conference side given its balance on both ends of the pitch, having finished the season ranked among the USL’s top-ten teams in goals scored (56) and goals conceded (38).

This is your team if: You value momentum. Reno is unbeaten in its last seven contests and finished off the regular season with a 3-1 statement win over the West’s No. 1 seed Orange County SC.