USL Cup Playoffs - Who to Root For - Newcomers

Reasons to support Nashville, Indy, Portland and STLFC as they prepare for their postseason debuts 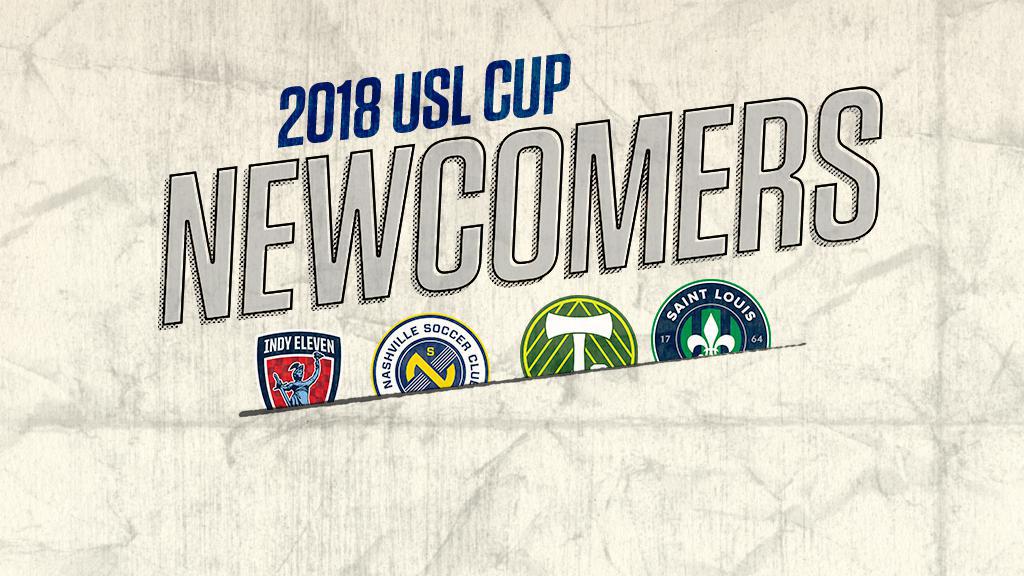 After 31 weeks, 16 teams remain with a chance to raise the USL Cup at season's end, with a mix of perennial powers and surprise squads making the cut for the single-elimination tournament. Ahead of the start of the 2018 USL Cup Playoffs on Friday - and as a tribute to the start of the NBA season this week - we'll break down each of the sides in the postseason field and compare them to a 2000's NBA franchise, starting with four newcomers preparing to make their playoff debuts.

Player to Watch: Matt Pickens. The 36-year-old goalkeeper played a significant role in Nashville claiming the league’s second-best defensive record as the side conceded just 31 goals in 34 games during its inaugural campaign. Pickens ranked fifth amongst USL netminders in saves (89) and second in clean sheets (14), falling just one off the pace of Ottawa Fury FC’s Maxime Crepeau for the league lead.

NBA Comparison: 2011-12 Utah Jazz. This version of the Jazz wasn’t like last season’s that featured a flashy offensive weapon in Donovan Mitchell, but like Nashville, prided itself on defensive efficiency. Utah conceded less than 100 points per game over the 2011-12 campaign and squeaked out an eight seed in the Western Conference by relying on its big man Al Jefferson for its offensive production (19.2 PPG), much like how Nashville relies on 6-foot-5 forward Tucker Hume for timely goals.

Making the postseason in its inaugural campaign is quite the achievement for Nashville SC, especially given the side’s struggle to find consistent offensive production. NSC scored just 42 goals over the 34-game campaign – the least of any team in the playoff field – but made up for it with the USL’s second-best defensive record as it conceded less than a goal per game. Nashville will face a stern test in its postseason debut against 2018 USL Regular Season champion FC Cincinnati but can bring some confidence into the match as it was one of two teams (along with Bethlehem Steel FC) that FCC failed to beat in the regular season (0-0-3).

This is your team if: You want to see a Cinderella story shake up the USL Cup Playoffs with a historic postseason run, similar to the one the NHL’s Vegas Golden Knights pulled off in the 2018 Stanley Cup Playoffs.

Player to Watch: Ayoze. The 32-year-old fullback did a little bit of everything for Indy in its first season in the USL, leading the squad with 57 chances created and eight assists in 28 appearances. The Spaniard also carried his weight in defense, ranking second on the Eleven in tackles won (42), interceptions (48) and duels won (194).

NBA Comparison: 2015-16 Indiana Pacers. These Pacers, who happened to play right down the street from the Eleven’s home at Lucas Oil Stadium, were also the No. 7 seed in the Eastern Conference and played a balanced and gritty brand of basketball on their way to a 45-37 regular-season record. Paul George led Indiana with 23.1 points per game and brought his team within a victory of advancing to the second round of the playoffs, ultimately falling in a Game 7 to the Toronto Raptors.

Indy has made an impressive transition to the USL, ranking near the middle of the league in both goals scored (45, T-17) and goals conceded (42, T-14) in its debut season. The challenge now for Indy, which enters postseason play on a three-game winless run, will be to go on the road and knock off reigning USL Cup champion Louisville City FC. Indy won just five times away from Lucas Oil Stadium this season (5-7-5) and will need a special performance if it wants to avoid going one-and-done in its inaugural playoff run.

This is your team if: You appreciate a balance of attack and defense and would like to see a franchise continue to make strides in its first USL season.

Player to Watch: Marvin Loria. The 21-year-old forward played a key role in Portland’s top-ten offense as the Costa Rican recorded a team-best 56 chances created and seven assists over 30 appearances this season.

NBA Comparison: 2013-14 Portland Trail Blazers. Damian Lillard averaged over 20 points and five assists per game in his sophomore season as the Blazers returned to the NBA Playoffs after a two-year absence with a fifth-place finish in the Western Conference. Portland made an impression during its playoff run, beating James Harden’s Houston Rockets in the first round before falling to the eventual NBA champion San Antonio Spurs.

Like those Blazers, the Portland Timbers 2 finished their 2018 campaign ranked in the top ten in offense, scoring 58 goals in 34 games led by Foster Langsdorf’s 14-goal haul. T2 will bring that high-scoring attack into its playoff debut on Friday night against Phoenix Rising FC, a side that it just beat 1-0 on the final weekend of the regular season. After failing to qualify for the postseason in each of its three previous USL seasons, Portland will attempt to make up for lost time as the club seeks to match, if not surpass, the Blazers’ postseason success.

This is your team if: You want to see a young, attack-minded side make the most of its first opportunity in the postseason OR you aren’t the biggest fan of Didier Drogba (or Chelsea FC) and would like to see his career end on a sour note.

Player to Watch: Sam Fink. The 25-year-old center back will be charged with containing Orange County SC forward Thomas Enevoldsen in the club’s USL Cup Playoffs debut after a strong season in the heart of the Saint Louis defense. Fink led his side with 144 clearances and ranked second amongst his teammates in aerial duels won (94) and interceptions (53).

NBA Comparison: 2014-15 New Orleans Pelicans. The Pelicans technically made their NBA postseason debut in 2015, despite the franchise having made five prior postseason appearances as the New Orleans Hornets. The team finished as the No. 8 seed in the Western Conference and was the second-lowest scoring team on that half of the playoff bracket as the Pelicans struggled to find a consistent second option to Anthony Davis. New Orleans’ postseason debut as the Pelicans didn’t last long as the side was swept out of the first round by the Golden State Warriors.

After a mixture of near misses and disappointing campaigns, Saint Louis FC finally secured its inaugural trip to the USL Cup Playoffs in its fourth year in the league. STLFC climbed into the playoff positions with some strong play down the stretch and proved it can hang with the big boys after picking up results against Real Monarchs SLC, Reno 1868 FC and the Swope Park Rangers over the campaign’s final month and a half. Like the Pelicans, however, Saint Louis has had trouble finding secondary scoring beyond forward Kyle Greig, who tallied 13 of the club’s 44 goals this season. Greig will have to continue his strong play or someone else – 2018 USL 20 Under 20 selection Albert Dikwa? – will have to step up in order to keep up with an offensive-minded Orange County side and potentially spring the upset to earn the franchise its long-awaited first postseason victory.

This is your team if: You want to be part of an excited and passionate fanbase with an awesome name (the St. Louligans) as its team enters the postseason for the first time after years of hardship.