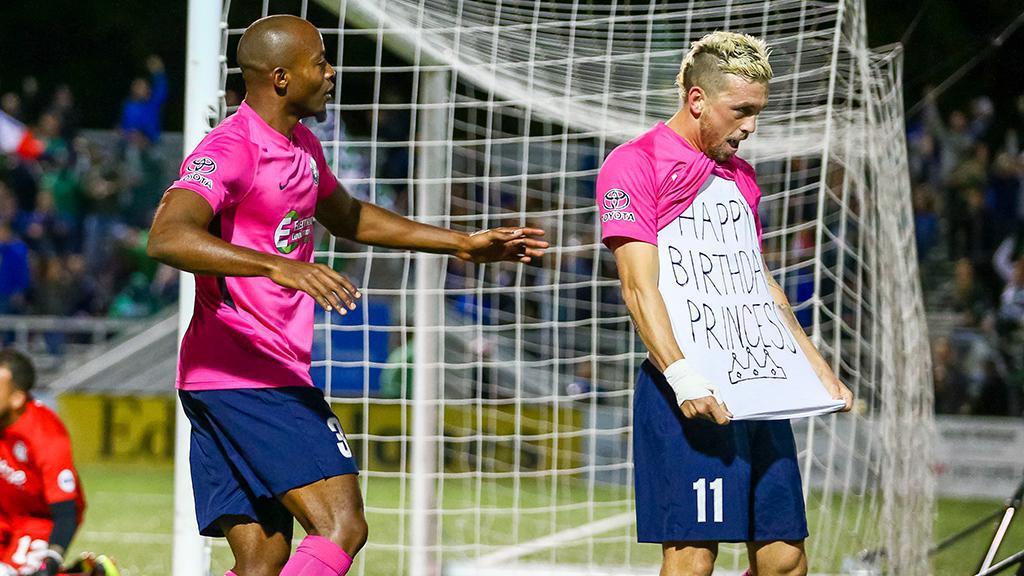 FENTON, Mo. – Corey Hertzog’s goal on Wednesday night that proved the winner in Saint Louis FC’s 1-0 victory against Tulsa Roughnecks FC produced a celebration from the forward for his daughter, who turned two years old on Thursday.

If the striker and his teammate can replicate their midweek performance this Saturday night when another side from the Sooner State, OKC Energy FC, comes to Toyota Stadium – Saint Louis (8:30 p.m. ET | Match Center | ESPN+), there will be more celebrations to go around with a win or a draw putting STLFC into the USL Cup Playoffs for the first time.

Hertzog’s fourth goal of the season came off a training ground routine from a corner in just the 14th minute, capping off a blistering start from the hosts that could easily have seen it take the lead prior to Sam Fink’s back-post header being nodded goalward by Phanuel Kavita, which allowed Hertzog to volley home from close range and get the hosts an early lead.

“It was huge, just getting the early goal,” said Hertzog. “You would have liked to get a couple more, I should have finished the second one going into halftime so its two-nothing, but it shows the boys are together, playing defense, it’s hard to come here and score goals. If we do that Saturday, we’ll be in the playoffs if they don’t score.”

Saint Louis’ victory moved it into seventh place in the Western Conference standings with one game to go for itself, the eighth-place Swope Park Rangers and ninth-place San Antonio FC. Saint Louis is in the strongest position of the three, needing just a point to move it clear of San Antonio to ensure a postseason berth, but the side isn’t taking anything for granted given that the wrong combination of results could still see it on the outside looking in by the end of Sunday evening.

That said, getting the victory the team knew it would need from one of its last two games out of the way against the Roughnecks continued to build the side’s confidence. STLFC has now won seven consecutive games at home as it welcomes an Energy FC side that has nothing to play for but pride.

“The job’s not done so there’s still pressure, but three points in this game makes it a lot… not easier, but it relaxes the boys a little bit for Thursday and Friday,” said Hertzog. “But it’s going to be a tough one on Saturday against OKC. They’ve signed a lot of good players and they’ve got a good team.”

STAKES RAISED IN SOUTH TEXAS DERBY: San Antonio FC knows that without a victory on Saturday night its chance at a place in the 2018 USL Cup Playoffs will be over, so the fact that the club’s biggest rival in Rio Grande Valley FC is the visitor to Toyota Field (8:30 p.m. ET | Match Center | ESPN+) is being looked at as a positive by the side which already has plenty of motivation to defeat its South Texas Derby rivals.

“We’re playing some of our best soccer at the right time of the year and our job now is to extend our time,” said SAFC Head Coach Darren Powell. “We know RGVFC well and it’s a great rivalry, so it adds something extra to the match regardless of what’s at stake in the league because it’s also about the pride of winning a local derby. They’re in a good run of form, so Saturday will be a good game and obviously we want to make sure we deliver a good performance for our fans.”

This is the third consecutive season SAFC and the Toros have played in the final game of the regular season, and San Antonio will be hoping this time doesn’t turn out the way it did in 2016. Back then, SAFC would have clinched a place in the postseason with an away victory against the Toros but suffered a 3-0 defeat that allowed Orange County SC to overtake it for the final berth in the postseason.

This time around San Antonio not only needs to win, but also needs help from elsewhere as it sits in ninth place behind Saint Louis FC and the Swope Park Rangers going into the weekend’s action. While that’s the case, SAFC’s players are looking to focus on what they need to get from the game and worry about what’s going on elsewhere after the final whistle.

“Right now, we need to control our own game,” said SAFC defender Moises Hernandez. “It’s crucial that we get three points if we want a chance to get into the playoffs, so hopefully that gives us the push we need and [we hope] results around the league can go our way.”

TOROS HOPE TO PLAY SPOILER: While San Antonio needs victory to keep its playoff chances alive there’s nothing tangible at stake for Rio Grande Valley FC as it heads to Toyota Field, but given the nature of the rivalry between the two clubs and two sets of supporters the Toros are hoping they can produce a victory to even the regular-season series this year.

“We felt that the first game they played us here they were a bit fortunate to get out of here with a draw and the second game in the first half we were pretty good and in the second half they were better than us and pretty much had their way with us,” said Toros Head Coach Gerson Echeverry. “We definitely would like to return the favor, I know that they have playoff implications and stuff and so just because we aren't in the playoffs doesn’t mean this game is not important to us, we are going to go out there and leave everything on the field and you know try to leave out of there with three points.”

Rio Grande Valley has been in better form than its 14th-place position would indicate, winning three of its last four contests and going 4-1-1 in its last six games after defeating Tulsa Roughnecks FC 2-1 away from home last Saturday night. That run of form has accounted for half the club’s victories this season and has put the side in an optimistic mood that it can reverse the 3-1 defeat San Antonio took when it visited H-E-B Park in August.

“The team has really come together at the end of the season and being able to end the season against SAFC is a huge motivation for us to go out and win especially since they came to our house and left with three points,” said Toros midfielder Brandon Morales. “Now it’s our turn to go and ruin their party.”