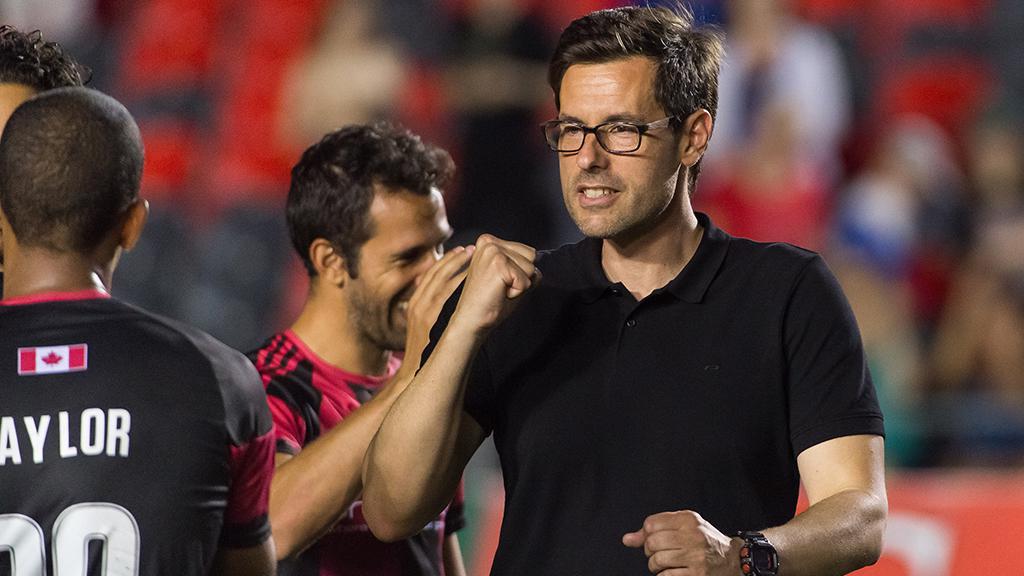 OTTAWA – Since their last outing on September 30, it’s been Ottawa Fury FC that has had to watch the rest of the Eastern Conference’s playoff contenders from the sidelines hoping that by the time their next outing arrived they would still have a path to reach the USL Cup Playoffs.

But on Saturday afternoon when the side hosts the Charleston Battery at TD Place (2 p.m. ET | Match Center | ESPN+) it will be those other contenders that are paying close attention to how Fury FC fares as one of four teams vying for the final two playoff spots in the Eastern bracket.

“I think first of all it’s fantastic that we’re going to be in the playoffs [race] until the final moments,” said Fury FC Head Coach Nikola Popovic. “To be able to fight for that, we have to be very proud about that. I think the mindset, it’s very, very good. We are focused on our game, we cannot be thinking of any other things.”

The fact that Ottawa’s game kicks off well in advance of the rest of the weekend’s slate should help the side’s focus as it takes on a Battery side that is locked into the No. 4 seed but is coming off back-to-back defeats to Toronto FC II and ATL UTD 2. Fury FC knows it must win against the Battery, a result that would both eliminate North Carolina FC from playoff contention and then put pressure on Nashville SC and Bethlehem Steel FC to get results in their final games to move back ahead of Ottawa.

And while Fury FC’s home form has been up and down all season – the side has recorded only one more win on home turf at TD Place than away from home in 2018 – the fact that the side has kept itself in with a chance going to the final weekend of the season is reason for optimism for the side.

“We’ve put ourselves into a much more difficult situation that we would have hoped, but at the end of the day if we can take care of business here at home in the last game of the season and put ourselves into a playoff spot going into the evening games and into Sunday,” said Fury FC’s Carl Haworth. “At that point anything can happen and it’s completely out of our control so our only focus is two o’clock here and Charleston and getting the three points.”

NASHVILLE AIMING TO MANAGE OUTCOME: One of the teams that will have a keen eye on Ottawa Fury FC’s contest is Nashville SC, which missed out on a place in the postseason on Tuesday night after being held to a 2-2 draw against Toronto FC II at First Tennessee Park. The side will play host to FC Cincinnati on Saturday night (8:30 p.m. ET | Match Center | ESPN+) knowing in advance whether it has clinched a playoff berth or if Ottawa has taken victory which would necessitate a positive result against the 2018 USL Regular Season champion.

Should Fury FC have failed to take all three points, it could offer the chance for Nashville to be more aggressive and look to push for a higher seed knowing that its place in the postseason is already secure. If his side needs to pick up a point to regain its edge over Ottawa, however, NSC Head Coach Gary Smith says the approach would be more cautious.

“If we need points, the mentality will to be selective,” said NSC Head Coach Gary Smith. “We need to be selective and professional in understanding how to manage the game well. When moments come, we can take advantage of great, but as the game unfolds we need to think about our opponent and where we are in the game.”

Nashville suffered a late letdown against Toronto to miss out on clinching its postseason berth on Tuesday, conceding twice in the final 15 minutes after a goal and assist by second-half substitute Brandon Allen had put the side two goals to the good. With Saturday’s contest being the club’s sixth in the past 22 days, the focus for the side in the past few days has been recovering properly for the challenge that Cincinnati will pose.

“Given the way our schedule has gone, with three games in the last week, it’s actually quite difficult on the training field to do too much,” said Smith. “At this point in time, our biggest challenge will be recovery, physically and mentally. It’s going to be about focus and energy at this point.”

With the regional rivals having played to a draw in their first two official contests, a third consecutive stalemate would be enough for Nashville to earn its postseason place. Certainly, Smith wants to make sure his side takes advantage of the fact that it doesn’t have to rely on a result from elsewhere to clinch a playoff spot.

“The main focus has to be the buildup to what the most difficult scenario might be,” said Smith. “We still control our destiny, and that should be our focus. We don’t want to rely on other teams.”

WING AND A PRAYER: North Carolina FC’s playoff hopes could have evaporated completely by the time it takes the field against the Charlotte Independence on Saturday night at the Sportsplex at Matthews (7:30 p.m. ET | Match Center | ESPN+), but as long as there’s a chance the side is remaining positive going into the Southern Derby clash.

“Always a chance,” said NCFC Head Coach Colin Clarke. “It might be a slim one but there’s still a chance. We have to do our job first and put the pressure on the other teams that have to play on Sunday. That means going into Charlotte and getting a positive result.”

With seventh-place Nashville SC out of reach after North Carolina’s 2-1 defeat the Louisville City FC on Tuesday night, NCFC is pinning its hopes on the third member of the Southern Derby rivalry in the Charleston Battery, who would need to take points from Ottawa Fury FC on Saturday afternoon to keep NCFC’s playoff chances alive. Then it would be a question of not only taking victory against the Independence but doing so by the sort of margin that would allow North Carolina to have a chance to bridge the six-goal advantage eighth-place Bethlehem Steel FC holds over it going to the final game of the regular season.

Having claimed a 6-2 victory against the Independence earlier this year, there’s reason to believe something similar could be possible this time around, especially if NCFC gets a bounce in mood should Ottawa miss out on victory.

“We need to focus on ourselves, do the best we can out there and score as many goals as possible,” said NCFC defender Aaron Guillen. “If things play out right, then we’ll be in the playoffs.”

The Independence look to be a much different proposition at this point of the season than in that last meeting on August 25. Undefeated in their seven games since that loss at Sahlen’s Stadium at WakeMed Soccer Park, the Independence ended the playoff hopes of the Tampa Bay Rowdies a week ago with a 2-1 win at Al Lang Stadium and will be looking to wrap up the season in positive fashion against their in-state rival.

With a large contingent of NCFC fans expected to again make the trip, Clarke is hoping his side can at least replicate its 2-0 victory when it first went to the Sportsplex at Matthews back in April.

“The pressure is on us to go into their place and win again,” said Clarke. “We’ve done that earlier in the season and we obviously had a good result against them at home, so different circumstances. Their season is done and it’ll be interesting to see how they approach it, but I know [Independence Head Coach] Mike [Jeffries] and his club will want to go out on a positive note for their fans. If this is our last game we want to make sure it’s a win. We have a lot of supporters traveling and we want to make that work for them.”