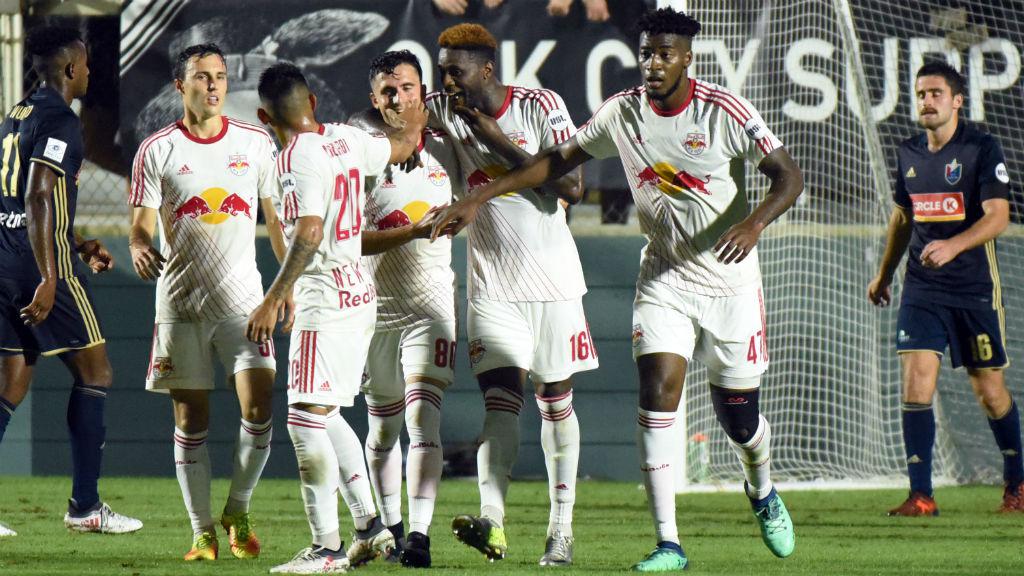 CARY, NC. – For the second time in as many games, the New York Red Bulls II were reduced to ten men and did not flinch.

“Obviously, going down a man two weeks in row isn’t easy,” New York Head Coach John Wolyniec told WRALSportsFan.com. “We fought through it and got two results. A lot went against us tonight, but our guys really pushed it to the limit.”

After playing a man down for 66 minutes last weekend in a 1-1 draw at Nashville SC, the Red Bulls II did one better on Saturday at Sahlen’s Stadium at WakeMed Soccer Park as the side picked up its first road victory of the season with a 2-1 win over fellow playoff contender North Carolina FC.

New York took the lead in the 24th minute through Anatole Abang but then saw the forward sent off after the halftime whistle blew for kicking out at NCFC defender Aaron Guillen. Kyle Bekker’s strike seven minutes after the break looked to give the home side a path to victory but the Red Bulls II capitalized on an errant pass from NCFC defender Wuilito Fernandes in the 79th minute and Tom Barlow tapped home the rebound from Andrew Tinari’s shot to give the visitors three critical points.

“We’re immensely disappointed with the outcome,” said NCFC Head Coach Colin Clarke. “They started better than us, which was disappointing. We gave up a poor goal, then the red card before halftime changes us. We do very well, create chances, and get the goal, and then you’re pushing looking for the next one. Then we make a very, very inexperienced mistake in the back and it cost us the three points.”

The result also saw New York leapfrog North Carolina into the eighth and final playoff spot in the Eastern Conference with two games remaining in the regular season. NCFC now sits in 10th place, two points below New York, and faces a difficult final week of the season with must-win road matches against Louisville City FC and the Charlotte Independence.

“We pick ourselves up and go into a very, very hard place and look to get three points,” Clarke said of Tuesday’s trip to Louisville. “We have two games left and can take three points from both, and we still have a very good chance.”

HONORS EVEN: FC Cincinnati continued its historic campaign on Saturday with a hard-fought 0-0 draw at Pittsburgh Riverhounds SC that saw the side extend its unbeaten run to 22 games, matching the USL record set by the Richmond Kickers in 2013.

The Riverhounds controlled much of the contest as FCC struggled to get into top gear, but the visitors showed resolve on the defensive end as they kept a clean sheet despite surrendering 18 shot attempts, 13 of which came from inside the penalty area.

“They did some things that caused us some problems, especially out in wide areas,” said FCC goalkeeper Spencer Richey. “They were trying to overload us on sides, and we struggled a bit to manage that. They got in behind and they got some cutback opportunities. But, you know, at this time of the season it’s about bending and not breaking and we did that tonight, so we’ll take the shutout.”

Pittsburgh Head Coach Bob Lilley was a little disappointed his side failed to get a better result given the amount of chances it created, but thought his team played at a high level against a quality opponent. He said he is happy with how his players have progressed throughout the season but insists they need to find a cutting edge down the stretch to find success and finish as high in the standings as possible.

“It’s a good team, but we have to have a mentality to be pushing the envelope,” Lilley said. “Hopefully they will understand that after tonight. We’ll remind them on Monday that’s the expectation.”

Cincinnati Head Coach Alan Koch has been sending a similar message to his squad since it clinched the 2018 USL Regular Season Championship on September 26. He was happy with the fight his side showed in a challenging environment as they continue to prepare for postseason play.

“I’m not happy or ecstatic with the result, but I’m satisfied with the performance, how we all managed the game, and how the players managed to get through it,” Koch said after the match. “Obviously, tonight, we tied a historic record, so that’s a nice accomplishment for the entire group.”

Cincinnati can establish a new mark with a result on the final weekend of the regular season as it travels to face playoff hopeful Nashville SC at First Tennessee Park on Saturday (8:30 p.m. ET | Match Center | ESPN+) .

ONE POINT IN THE RIGHT DIRECTION: Indy Eleven moved closer to sealing a spot in the 2018 USL Cup Playoffs with a 1-1 draw against Bethlehem Steel FC on Saturday at Lucas Oil stadium.

The Eleven could’ve clinched a playoff berth with a home win but after falling behind on a fluky goal against a fellow top-six side and finishing the match with ten men due to injury, Indy Head Coach Martin Rennie was happy to settle for a point given the circumstances.

“That could be the point that takes us into the playoffs,” Rennie said after the match. “Obviously, we wanted to win but as the night progressed we ended up, it was a free goal that we lost. Our center back pulled his hamstring. That was obviously a disappointment. Then in the second half we had our other center back injured as well. He had to go off. We were playing with ten men essentially for the last 15 minutes. That’s a really good point against a team that played very well tonight.”

Bethlehem had the better of the opportunities early on and took the lead in the 39th minute when Faris capitalized on Carlyle Mitchell’s untimely injury but were pegged back 16 minutes after halftime when Eugene Starikov found the back of the net with a brilliant volley.

The result kept Indy in fifth place in the Eastern Conference standings and in control of its postseason destiny with one game remaining in regular season. The Eleven can reach the playoffs with a win against Louisville City FC on Saturday (7:30 p.m. ET | Match Center | ESPN+) but could also already be in the postseason field by the time that match kicks off if Louisville takes at least a point when it hosts North Carolina FC on Tuesday (7 p.m. ET | Match Center | ESPN+).

“I think it’s going to be a good game but we’ve done well against Louisville this season,” Rennie said of his team’s regular-season finale. “We beat them in the first game here. We tied away but probably felt we were the better team that game. They are a good team and they play well. It’s a tough venue to play at. We go into it with a lot of confidence.”