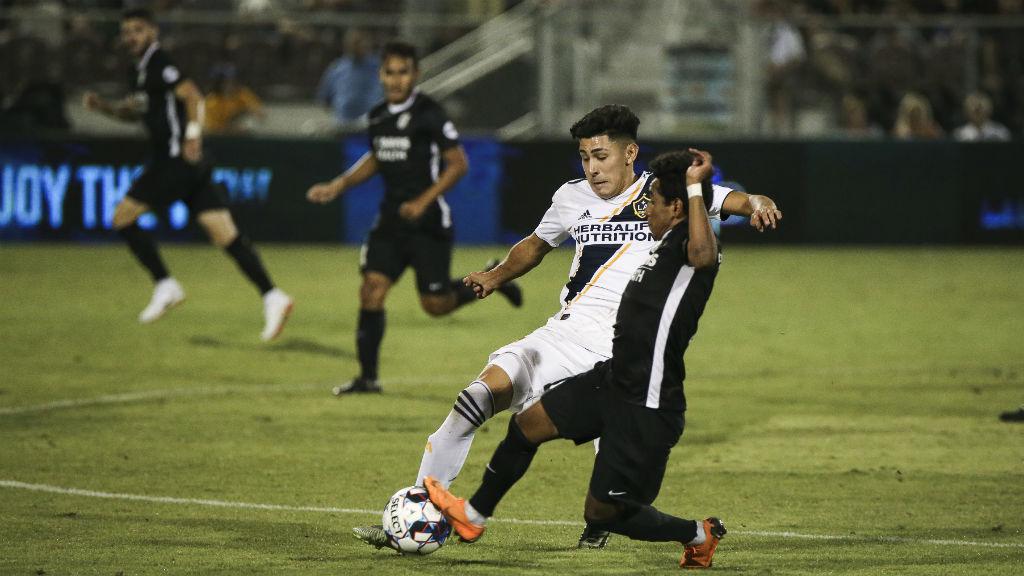 SACRAMENTO, Calif. – After extending its unbeaten run to six games with a 3-1 victory over the Swope Park Rangers on Wednesday, Sacramento Republic FC heads into the weekend with a chance to secure a top-four spot in the Western Conference and a home game in the 2018 USL Cup Playoffs with a win on Saturday against the LA Galaxy II at StubHub Center (10:30 p.m. ET | Match Center | ESPN+).

Sacramento Head Coach Simon Elliot was pleased with his team’s reaction in the second half of Wednesday’s match after Villyan Bijev’s opener was cancelled out by former-Republic FC forward Tyler Blackwood 14 minutes before the break. Cameron Iwasa and Jure Matjasic responded with second-half goals to seal three points for the home side as it maintained third place in the conference ahead of Real Monarchs SLC.

“It’s a good group and they work hard and they want to think their way through situations, so to see them adjust in the second half was pleasing,” said Elliot on Wednesday night.

Elliot had his side ease off the high press at times to give the Rangers a few different looks defensively and his players made the most of their opportunities going forward as they found space between the lines. That was the case in the 57th minute as Sacramento launched an attack down the right wing and Iwasa headed home his 16th goal of the season from Luis Espino’s cross for the eventual game-winner.

“It’s a credit to the service and all the rest of the guys,” Iwasa said of his success this campaign. “If I am scoring headers, then there are great crosses and I’m getting opportunities in that sense. It’s a credit to the team as a whole, not just myself. I’m fortunate that I’ve been the one on the end of them being able to put them away, but it’s the ball moving and the circulation that is creating a whole lot of chances.”

Iwasa will hope that good run of form continues on Saturday against the Galaxy II, which handed Republic FC its last loss – a 4-1 defeat at Papa Murphy’s Park – on August 18.

RIDING HIGH: After clinching its spot in the 2018 USL Cup Playoffs on Wednesday with a 2-0 away victory over the Portland Timbers 2, Reno 1868 FC heads into its weekend matchup at second-place Phoenix Rising FC at the Phoenix Rising Soccer Complex (10:30 p.m. ET | Match Center | ESPN+) with a three-game winning streak and a sense of belief.

“We expect a tough game, a lot of fans,” said Reno defender Jordan Murrell. “We know they have good players and that is why they are where they are at. But we need to go down there and get the result we need like we’ve done before.”

1868 FC cruised to a 4-0 victory at the Phoenix Rising Soccer Complex in its only trip to Arizona last season but couldn’t replicate that result in the sides’ only prior meeting this campaign as Solomon Asante scored the winner in the 92nd minute to give the visitors a 1-0 win at Greater Nevada Field.

A lot has changed since that March defeat, though, as Reno has recovered from a slow start to reach the postseason for the second straight year. The side is unbeaten over its past five contests and has kept four clean sheets over that stretch, outscoring its opponents 12-3.

“I think we’re playing confident right now,” said Reno Head Coach Ian Russell. “You look at the last few results that have gone our way. It’s a complete team effort and I think everyone is confident from the backline to our forwards.”

Russell will hope that good run of form continues over the team’s final two games of the season as it tries to work its way up the standings with the hope of earning a home playoff game in the Western Conference Quarterfinals. Reno currently sits in fifth place, two points behind Real Monarchs SLC, but controls its destiny for a fourth-place finish due to its game in hand on the Utah side.

“We have to keep on trying to get results,” said Russell. “If we’re home that’s great, if we’re away we have a great road record. So wherever we fall.”

OPPORTUNITY KNOCKS: San Antonio FC will try to keep its USL Cup Playoffs hopes alive and pile the pressure on the teams ahead of it when it takes on Las Vegas Lights FC on Saturday night at Toyota Field (8:30 p.m. ET | Match Center | ESPN+).

San Antonio’s postseason aspirations received a boost during the week when the seventh-place Swope Park Rangers dropped points at Sacramento Republic FC. The hosts can help their own cause even more this weekend by following up their 3-1 win over Seattle Sounders FC 2 with a second straight home victory.

“We know how big this game is and what it means in terms of our playoff aspirations, so we’re not going to hold anything back,” said San Antonio midfielder Ethan Bryant. “We’re going to leave it all out on the field and our goal is always to secure the three points.”

With victory against Las Vegas, SAFC would move level on points with Saint Louis FC and leapfrog it for eighth place in the West on the total-wins tiebreaker before STLFC plays its final two regular season matches next week. San Antonio would still need Saint Louis to lose one of those two games as the Missouri side will have a game in hand heading into its contest on Wednesday against Tulsa Roughnecks FC. San Antonio can also surpass Swope Park if it wins out and the Rangers fail to win their season finale against the LA Galaxy II next Sunday.

SAFC Head Coach Darren Powell wants his team to stay focused on the task at hand and believes his team is prepared to put on a strong display against Lights FC, which has picked up just two points from its previous 10 games.

“The guys have put in a good week of practice and they’re hungry to come out tomorrow night and get a win in front of our home fans,” Powell said. “We’ve worked on how we want to exploit the spaces that are available to us on the field when we have possession of the ball, and we want to make sure that we’re secure as a group when we don’t.”