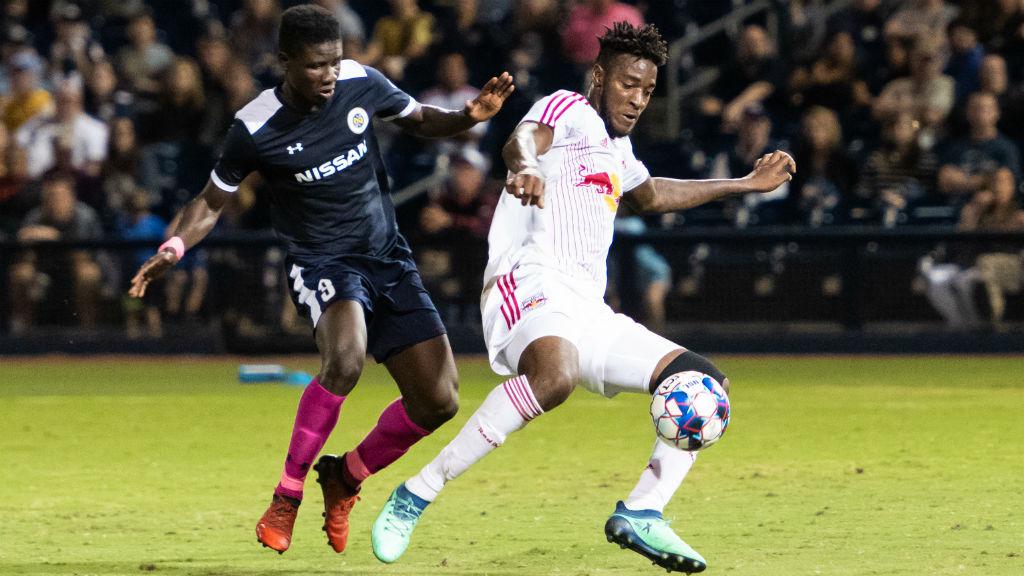 NASHVILLE, Tenn. – For the second straight Saturday, Nashville SC failed to make the most of a man advantage on its home turf as it settled for a 1-1 draw against the New York Red Bulls II at First Tennessee Park to remain outside the playoff positions in the Eastern Conference with two weeks to go in the regular season.

The hosts fell behind inside five minutes and could’ve been staring at a two-goal deficit after a quarter of an hour if not for the heroics of goalkeeper Matt Pickens, who got down quickly to his left to keep out Tom Barlow’s penalty kick.

“I just did my homework,” Pickens said of the penalty save. “I try to do things that are going to offset him and I try to let him actually play into my hands instead of me playing into his hands.”

Nashville Head Coach Gary Smith credited his goalkeeper for keeping his side in the game and helping it eventually earn “a valuable point” as midfielder Michael Reed equalized from a free kick routine in the 24th minute, moments after New York midfielder José Aguinaga was sent off for a serious foul on Alan Winn.

Smith was still disappointed his side didn’t go on to take all three points as it failed to take the game to New York, despite playing with an additional man for over 65 minutes. The Red Bulls II frustrated the home side with their press and continued their attacking style of play throughout the match as they attempted five more shots than the hosts and maintained nearly 50 percent possession on their way to their 10th road draw of the season.

“I honestly don’t think we moved the ball quick enough first off throughout the night,” said Smith. “I can’t give you the reason for that. You have to give them credit for the way that they try and press and lock a team out, and they did it well. When you’re a man up, especially at home, I would have expected our guys to have navigated that pressure a little bit better than we did.”

The result kept Nashville a point ahead of New York in the Eastern Conference standings, but both sides are now below the playoff line with three games remaining after North Carolina FC leapfrogged into eighth place with a win over the Richmond Kickers.

NSC still controls its own destiny thanks to games in hand on sixth-place Bethlehem Steel FC and seventh-place Ottawa Fury and will hope to take one step closer to a berth in the 2018 USL Cup Playoffs when it travels to Richmond next Saturday.

“I think we always take the positives and keep moving forward,” Reed said. “We cannot be taking stuff back right now. We are getting in good form right in time for the playoffs.”

PARTY ATMOSPHERE: FC Cincinnati celebrated its 2018 USL Regular Season Championship with a 3-0 victory over Indy Eleven on Saturday night in front of a USL regular-season record crowd of 31,478 fans at Nippert Stadium.

Fanendo Adi and Danni König scored on either side of halftime for the hosts and a 74th-minute Carlyle Mitchell own goal sealed the points as Cincinnati extended its unbeaten run to 21 matches (17-0-4) and its winning streak to a USL modern-era record 10 games.

“I don’t think it would be as enjoyable celebrating a regular-season championship if we didn’t go out and get a positive result against a very good team tonight. Fun night all around,” FC Cincinnati Head Coach Alan Koch said after the win.

The scoreline wasn’t flattering to the visitors, who gave it their all to spoil the celebrations and inch closer to securing a playoff berth. Indy Eleven maintained nearly 60 percent possession and attempted 20 shots to Cincinnati’s nine, but were undone by some defensive lapses and the inability to beat FCC goalkeeper Evan Newton.

“It sounds like a lopsided game because of the scoreline, but it wasn’t a lopsided game, it was quite an even game,” said Indy Eleven Head Coach Martin Rennie. “But, goals change games and they got goals at good times. I think that we made some mistakes on the goals that we definitely need to improve upon.”

Koch says that despite all the accolades FCC has already earned this season, his side still has room to improve down the stretch as it tries to match and potentially surpass Richmond’s USL modern-era record 22-game unbeaten streak against Pittsburgh Riverhounds SC and Nashville SC to close out the season.

“I’m looking forward to those games as exercises, but I’m also looking forward to the exercise of training every single day,” said Koch. “We want to squeeze everything we can out of this group. I don’t think we’ve peaked yet. As good as we have been, I think we’re still capable of more. But, we want to give ourselves the best chance possible to be successful in the playoffs. In a cup competition, anything can happen in 90 minutes, 120 minutes, penalty kicks. But, we want to control as much as we can control.”

FURIOUS AT THE FRAMEWORK: Ottawa Fury FC were denied three crucial points on Sunday afternoon at TD Place as home side settled for a 0-0 draw against Bethlehem Steel FC after hitting the woodwork four times in the first half.

Steevan Dos Santos accounted for two of those efforts as his fifth-minute penalty kick struck the base of the left post and came back out, and 17 minutes later the striker saw another powerful effort tipped onto the frame of the goal by Steel FC goalkeeper Jake McGuire.

McGuire’s counterpart Maxime Crépeau earned his 15th shutout of the season for the hosts, breaking the Fury FC franchise record set by Romuald Peiser in 2015, but that was mere consolation for a side that desperately needed three points.

“It was almost a perfect game,” said Fury FC Head Coach Nikola Popovic. “If we were able to score instead of hitting the post and find the net it would have been perfect. Defensively we were very good – I don’t remember them having many shots. It happens sometimes in football, but I think by performing this way, this team has a very good future.”

Ottawa currently sits in seventh place in the Eastern Conference standings, but will have to play the waiting game over its bye week as the side could be eliminated from playoff contention before it returns to the field to finish the regular season against the Charleston Battery on October 13.

“We’re so close,” said Ottawa captain Carl Haworth. “If we just keep doing those same things we did out there today – defensively and offensively – I think we’ll get a result in our last game of the season. If things go our way, we’ll make it into the playoffs. Everyone’s together on this team and we’re going to fight for each other right to the end.”