HARRISBURG, Pa. – After being contacted on Twitter in midweek by deaf FC Cincinnati fan Paul Thiergartner, who lived in Philadelphia and was heading to Saturday night’s game at FNB Field in Harrisburg, there was a little added motivation for FCC’s Emmanuel Ledesma.

And while there was still the priority of ensuring the club’s winning streak continued when the Argentine found the net in 68th minute, his gesture pointing to the stands as he gathered the ball to take back for the ensuing kickoff showed the added meaning the goal had for the standout midfielder in the middle of a hard-fought clash.

“I promised a special fan,” said Ledesma. “He told me on Twitter he was coming, and he wanted a signature on a picture – it was an amazing picture of me and Dekel [Keinan] – I said yes of course. I said if I score a goal, it’s for you and that’s why I pointed to him. I couldn’t go to him because it was a tie and we wanted to win the game, I got the ball and went to the middle, but this goal is just for him.”

Ledesma’s 14th goal of the season sparked a third comeback victory for Cincinnati in its last four outings as it claimed the top seed in the Eastern Conference for the 2018 USL Cup Playoffs with a 2-1 win that saw the side tie the 2016 New York Red Bulls II for the USL’s modern-era record for points (69) and total wins (21) while sending its winning streak to eight games and undefeated streak to 19.

As with its victories against Pittsburgh Riverhounds SC on Sept. 1 and Toronto FC II last Sunday, though, the result certainly didn’t come easily. A first-half goal by Paulo Junior put Penn in front as the hosts fought for their playoff lives, and they outshot Cincinnati 7-2 in the opening 20 minutes of the second half looking to add an insurance marker that could have made a major difference in the outcome.

Instead, Ledesma’s goal off the rebound after Emery Welshman’s initial shot had been saved by Penn goalkeeper Sean Lewis got the visitors back on level terms. It was followed by a finish by Corben Bone with six minutes to go that despite furious late pressure by Penn claimed all three points for the visitors and set off raucous celebrations in the locker room. 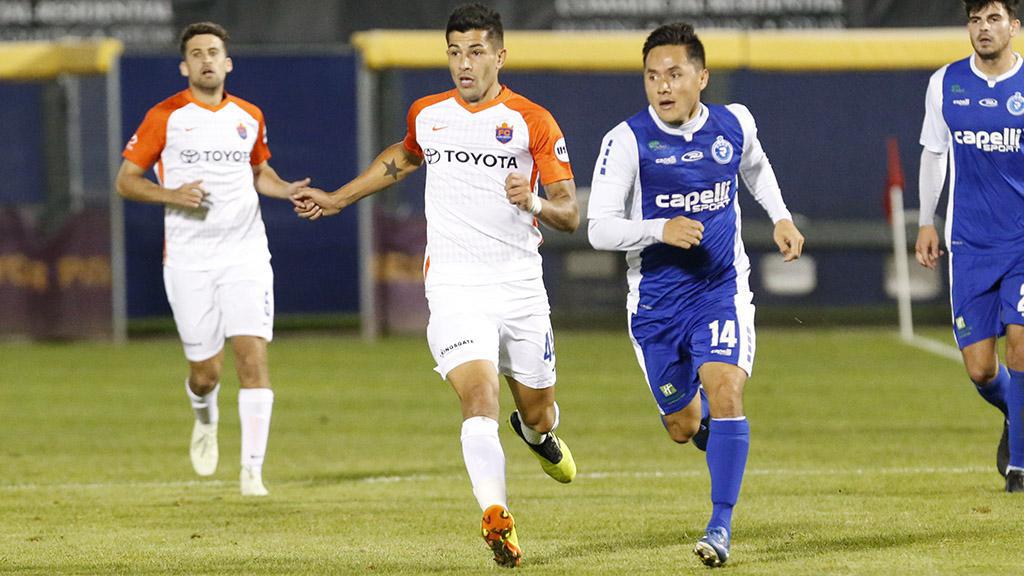 FC Cincinnati's Emmanuel Ledesma scored his 14th goal of the regular season to lead his side to a comeback 2-1 victory against Penn FC. | Photo courtesy Penn FC

“There’s a lot of people going crazy in the changing room right now – as they should be,” said FCC Head Coach Alan Koch. “I’m smiling, I’m happy, we’ve all worked our backsides off to get where we are, but we’re hungry for more. You can hear the players inside, they’re congratulating each other, but we’re getting ready for Wednesday, we want to win the regular season title for both conferences. We’re going to keep pushing each other. We’ll enjoy tonight, definitely, that’s for sure, because we’ve worked incredibly hard to get here.”

FCC now has the chance to clinch the USL Regular Season Championship this Wednesday night when it visits the Richmond Kickers at City Stadium, but with the first of the goals for the season accomplished the celebration spilled back out onto the field where Ledesma and his teammates connected with Thiergartner for a postgame photo.

They were very good with gestures. pic.twitter.com/4lYaFj1fs9

In a season that has been filled with memorable moments already for FC Cincinnati’s fans, Saturday night was the latest for the album the side has put together.

“We gave him a little gift,” said Ledesma, “but I think the special gift today is the three points and the title.”