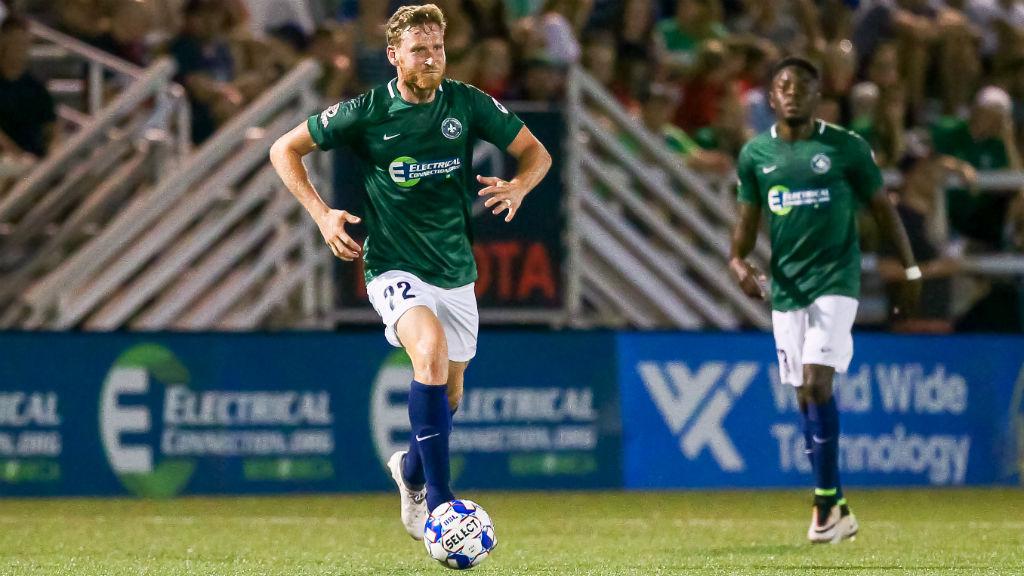 SAINT LOUIS – After holding on for a crucial 4-3 victory over the Swope Park Rangers last Saturday, Saint Louis FC can move closer to clinching the first trip to the USL Cup Playoffs in club history if it picks up at least a point against San Antonio FC on Saturday at Toyota Stadium – Saint Louis.

But the hosts have their eyes on more than just a draw having won five straight games on their home turf, a streak they are looking to extend as they try to exact a matter of revenge against SAFC after falling 2-1 in San Antonio in the second week of the 2018 USL season.

STLFC Head Coach Anthony Pulis says the San Antonio squad looks very different from their first meeting in March and expects a close contest against SAFC, which will be desperate to pick up three points after its midweek defeat against Swope Park.

“They have made some personnel changes and some players that made an impact during that game are no longer there, and likewise they have some new additions that have really paid off for them in recent games,” said Pulis. “Darren [Powell] always has his team ready to go so it should be a tough game on Saturday.”

Saint Louis forward Kyle Greig, who scored his side’s only goal in the previous meeting with SAFC, is ready for the challenge and will try to improve upon his impressive goalscoring record as he brought his total up to 13 this campaign with the game-winner against the Rangers last weekend.

Greig is just one goal shy of matching Irvin Herrera’s single-season club record for goals, but says he cares more about helping the club reach the postseason for the first time than surpassing the Salvadoran’s 2016 haul.

“It’s nice to be talked about when it comes to breaking records but my focus is just on helping the team make the playoffs and keep doing whatever it takes to get there,” said Greig, who has scored two postseason goals in his USL career. “Whether it’s scoring goals or setting them up or just running for 90 minutes, I want to do whatever is needed to make sure we get over that line because I think we deserve it with the way we have played this season.”

CUP UP FOR GRABS: Reno 1868 FC will hope to claim the inaugural Silver State Cup and boost its chances in the Western Conference playoff picture when it faces Las Vegas Lights FC on Saturday at Greater Nevada Field.

After the two sides played to a 1-1 draw in March at Cashman Field, Reno moved closer to claiming the first edition of the in-state rivalry with a 2-1 home victory in the sides’ most recent meeting as Antoine Hoppenot scored the game-winner in the fifth minute of second-half stoppage time to claim a dramatic three points.

That victory means that 1868 FC will lift the trophy with a win or a draw, but Lights FC can overcome the deficit with a victory by two goals or more.

“This is an important game for us,” said Reno midfielder Eric Calvillo. “Yeah, it’s an in-state rivalry. But we’re trying to make the playoffs so each game in front of us is important.”

A result on Saturday for Reno would not only earn the club some silverware, but it would go a long way towards helping the side fend off San Antonio FC as it tries to hold onto a playoff position. 1868 FC currently occupies eighth place in the West and sits two points ahead of SAFC, but also has two games in hand over the Texas side.

The hosts will try to make those additional games count as they finish up the regular season with four of six matches at Greater Nevada Field. Reno has been average on its home turf this season (6-5-2) but has won its last two, including last weekend’s 1-0 victory over the LA Galaxy II.

1868 FC Head Coach Ian Russell hopes his side can continue that streak against a Las Vegas team that poses a threat despite just picking up a single point over its last seven contests.

“They play over the top a lot,” said Russell. “Their style is unorthodox. And it’s a rivalry match. So, we have to be prepared for a tough contest.”

HOLDING OUT HOPE: After results elsewhere over the past week, OKC Energy FC knows it has a tough hill to climb in order reach the 2018 USL Cup Playoffs but the side continues to push on ahead of its must-win matchup with Sacramento Republic FC on Sunday at Taft Stadium.

Energy FC enters the match seven points outside the Western Conference playoff places with just four games remaining in the regular season and desperately needs to pick up three points against the top-four side – and get help from Las Vegas Lights FC and others – to keep its postseason hopes alive.

“We’re going to go out there and give it our best effort,” said Energy FC goalkeeper Cody Laurendi. “We know what’s at stake. We have to take care of business. Obviously, it’s easy to look at other results and say ‘this didn’t go our way’ or ‘this did go our way’, but at the end of the day, all that matters is what happens in our locker room and on our field.”

OKC will try to better the 1-1 road draw it managed against Sacramento the sides’ first meeting back in July when Christian Volesky cancelled out Cameron Iwasa’s first-half strike in the 78th minute to snatch a point. Energy FC midfielder Atiba Harris hopes his team gets out to a faster start this time around as it tries to snap Sacramento’s three-game winning streak.

“That one started a little slow for us,” Harris said of the first meeting. “They were on top of us, but in the second half we got it together and got the equalizer. Unfortunately, we didn’t get the winner, but we felt good after the game in terms of the way we played in the second half. So, we’re looking forward to this weekend and hopefully we get three points.”