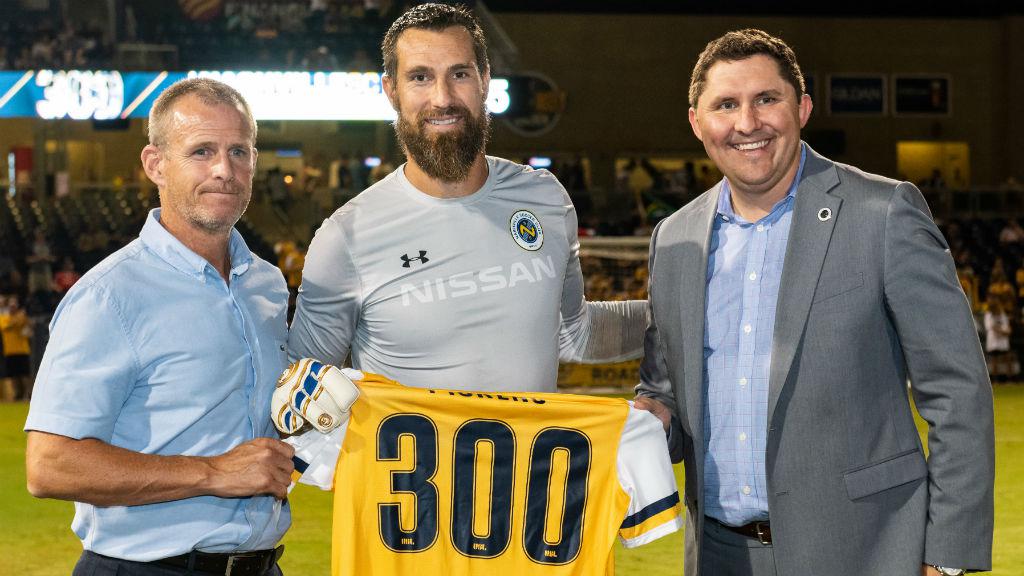 Kimura reached the milestone in Nashville’s 3-3 draw at North Carolina FC on Sept. 8, while Pickens followed suit on Tuesday night against his former club Tampa Bay, for which he made more than 100 appearances before joining Nashville this past offseason.

“I think you have to have a certain mentality to play long and be successful at it,” Pickens said. “You have to really sacrifice things, sacrifice things with your family, time away from your family. It’s selfish at times, it really is. When you look at the scheme of things, it’s your job, but it’s still a game at the end of the day, but as long as your driven, and you’re going in the right direction, and you’re constantly thinking about how can I get better every day, it doesn’t matter if it’s when you’re 25 or 35, you’re looking to get better.”

As veterans on a Nashville squad in its inaugural season, Pickens and Kimura have led by example and spent time working with the team’s younger players – as well as each other – to try to help the team improve.

“We are here to help others always,” Kimura said. “[Pickens] and I talk about food all the time. What kind of food to eat. We have to preserve our bodies as much as possible. We are getting up there, but age is just a number.”

The 34-year-old defender and 36-year-old goalkeeper, who also played together with the Colorado Rapids in Major League Soccer earlier in their careers, were happy to celebrate the achievement but know there’s still work to do this season as Nashville sits two points outside of the eighth and final playoff spot in the Eastern Conference with six games remaining in the regular season.

“It’s a good milestone in your career and like I said, something you’ll look back on maybe five, 10 years from now and appreciate probably more, but right now, we’re so focused on what we need to do to stay in the playoffs and get results at home,” Pickens said. “That’s kind of my mentality on it right now.”

Pickens and Kimura will look to help Nashville get back on track when the side hosts the Charleston Battery on Saturday night.

STILL IN THE HUNT: Coming off a their 2-1 road win against Nashville SC on Tuesday night at First Tennessee Park, the Tampa Bay Rowdies are looking to add to a late-season surge that has kept the side in the picture for a return trip to the USL Cup Playoffs.

Georgi Hristov’s penalty kick gave the side an early lead and London Woodberry’s second-half own goal clinched just the fourth road victory of the season for Tampy Bay as it moved within four points of the final playoff spot in the Eastern Conference. Hristov and the Rowdies will try to carry that momentum into this Saturday’s showdown with the Richmond Kickers at Al Lang Stadium as they search for a third successive victory.

“While it felt great to get the goal, it felt even better to win,” Hristov said. “It’s no secret we struggle on the road, so going to Nashville and getting that result means a lot. That is in the past now as we host Richmond this Saturday. We have to go out and show why we deserve a place in the playoffs. It’s that time of year where you can’t let points slip away if you want a spot in the postseason.”

Tampa Bay’s postseason prospects looked rather dim as the month of September began, but three wins in four games – two of which came against fellow East contenders – has given the side hope of reaching the playoffs for the second straight season.

“We knew that it would not be easy, but we’re hungry to earn a spot and I think this Tuesday showed that,” said Tampa Bay Head Coach Neill Collins. “Nashville is not an easy place to play and we went out there and grinded out the victory. We’re still out of the top 8, but we know if we can get results in these last matches, we’ll have a serious shot of making it. We’re taking it game-by-game and not getting ahead of ourselves. This Saturday is another step for us to inch closer.”

STEEL FC HANGING ON: Bethlehem Steel FC returns to competitive action after a 15-day layoff when the side hosts Toronto FC II on Saturday afternoon at Goodman Stadium in a must-win game as it tries to hold off the chasing pack in a crowded Eastern Conference playoff race.

“It was good to have a bye week and I’m glad that we were able to get a really high-quality game in over the weekend,” said Burke. “We really pushed the envelope in terms of fitness in training sessions the last two weeks on specific days so that we can make sure that we dictate the terms of these last four games.”

Bethlehem showed more attacking desire in its most recent meeting with TFC II, a 2-0 victory at Marina Auto Stadium in Rochester back in August, when it attempted twice as many shots and hit the target seven times compared to Toronto’s one.

Yet the sides have headed in opposite directions since, as Bethlehem has conceded seven goals in its last two games and Toronto enters having scored three goals in each of its last three contests.

“Seeing how [Endoh] scored three goals out of the box, it means I have to stay close to him and make sure he has no chance to shoot or turn to goal,” said Chiluya.

NO ROOM FOR ERROR: Ottawa Fury FC will try to stay above the playoff line when it travels to Slugger Field on Saturday to take on Louisville City FC. The visitors currently sit in seventh place in the East, two points ahead of Nashville SC, but have played one or two more games than each of the teams below them as they face the challenge of visiting the defending USL Cup champion.

“It’s a very important game for us,” said Ottawa Head Coach Nikola Popovic. “We know they are the [reigning] champions. They have a fantastic team, very good players. It’s a very difficult place to play so we have to be very focused. There is no room for mistakes.”