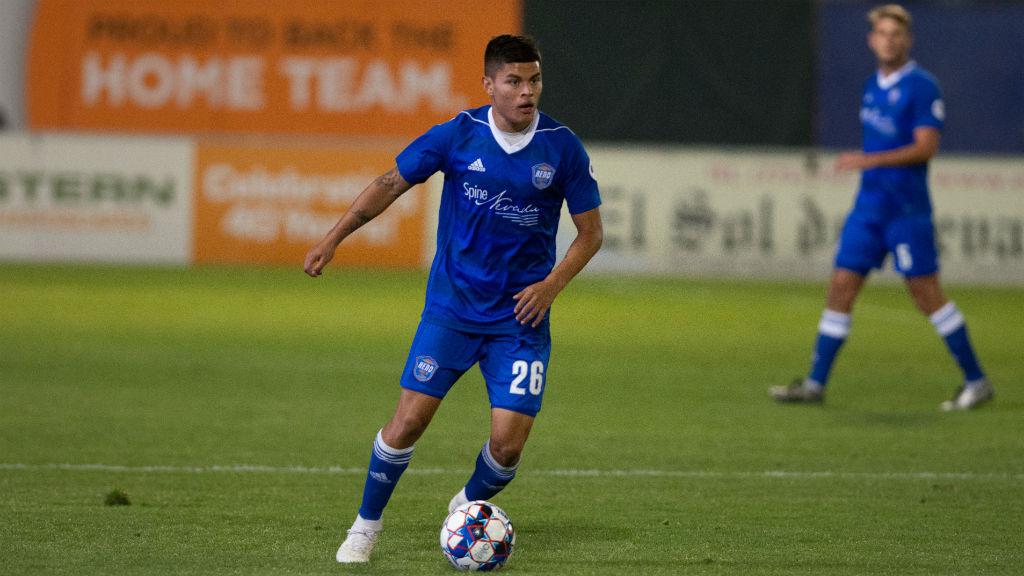 RENO, Nev. – Reno 1868 FC moved back into the Western Conference playoff positions thanks to a 1-0 home victory over the LA Galaxy II on Saturday at Greater Nevada Field, and got one of its best goals of its season in the bargain.

Midfielder Eric Calvillo provided the game’s only offense eight minutes before halftime, firing a thunderous strike from 35 yards out past Los Dos goalkeeper Eric Lopez and into the top-left corner. The wonder-goal was the 20-year-old’s first in nine games with the club since joining on loan from the San Jose Earthquakes.

“Feels great, especially with three points as the result,” Calvillo said. “I just came out to do what I had to do and did my job to help the team and I’m thankful for a goal. We’re getting closer to the playoffs so we’ve just got to get more.”

1868 FC created enough chances to put a few more goals past a young Los Dos side but struggled to put them away. The home side retained 57 percent possession and attempted 13 shots – six more than the visitors – but only managed to find the target with three of those efforts at goal.

Thankfully for Reno, Calvillo’s strike was enough to secure three points as it leapfrogged San Antonio FC for the eighth and final playoff spot in the Western Conference standings. 1868 FC goalkeeper JT Marcinkowski hopes his side, which has played a game fewer than SAFC, will be more clinical when it continues its four-match homestand against Las Vegas Lights FC next weekend.

“I thought the second half got sloppy and we should’ve put them away a lot earlier, but a win is a win so it’s nice to start this homestand with three points and keep it rolling against Vegas,” Marcinkowski said. “We’ve had a couple games in a row where we haven’t played very well. I think we play the best when we are on the front foot, aggressive, stepping high and just keeping the ball and I thought we did that tonight in the first half.”

CRUNCH CONTEST TO COME: After suffering disappointing defeats on Saturday, the Swope Park Rangers and San Antonio FC will quickly turn their attention to a massive midweek meeting between the two sides on Wednesday night at Children’s Mercy Park.

The Rangers had their four-game winning streak snapped at the weekend by Saint Louis FC, which, in turn, moved level on points with its regional rival thanks to a 4-3 road victory. Hadji Barry scored for a sixth straight game to tie the USL's modern-era record for goals in consecutive matches and give Swope Park a first-half lead, but STLFC responded with four straight goals to push the contest seemingly out of reach.

Tyler Blackwood and Ethan Vanacore-Decker pulled goals back for the Rangers in the final six minutes, but they turned out to be mere consolation as Kyle Greig’s 82nd-minute finish stood to be the game-winner for STLFC in the striker’s return to his hometown.

“The positive was they never gave up,” Swope Park Head Coach Paulo Nagamura said. “They fought until the end even though they were down 4-1 with 12 minutes left to play. The goals we conceded were disappointing.”

The same could be said for the goals San Antonio FC surrendered in its 2-1 loss to Tulsa Roughnecks FC at ONEOK Field.

SAFC striker Cesar Elizondo gave the visitors the lead in the 29th minute, but it didn’t last long as Tulsa's Nemanja Vukovic converted from the penalty spot to equalize eight minutes later. Eti Tavares completed the comeback for the Roughnecks after the break when he finished off a quick counterattacking move that caught out the San Antonio defense.

“We need to get tighter for the upcoming games,” San Antonio goalkeeper Matthew Cardone said. “We still control our future and have an opportunity to get into the playoffs, so we’ll aim to get the points we need out of our next matches.”

San Antonio currently sits outside of the Western Conference playoff places but can pass Reno 1868 FC and move level on points with Saint Louis and Swope Park if it can claim three points against the Rangers. The sides have met twice already this season, with Swope Park earning a 2-1 victory in their most recent matchup at Toyota Field.

FALLING FLAT: Fresno FC’s playoff hopes suffered a devastating blow with a 1-0 loss to Orange County SC on Sunday night at Chukchanski Park as the visitors climbed back to the top of the Western Conference.

The home side created more chances over the span of the contest – attempting 16 shots to OCSC’s seven – but was made to pay for its lack of clinical finishing six minutes from time when Noah Powder scored his second goal in as many games to snatch three points for the visitors.

The defeat was Fresno’s first home loss in nearly three months and kept the side on 35 points, leaving them 10 points behind Reno for the final spot in the West. With just four games remaining, Fresno could be mathematically eliminated from playoff contention this week.

“It was obviously a very tough night,” Fresno Head Coach Adam Smith said. “We needed to win to keep ourselves in the playoffs. It’s going to be difficult but we can’t be negative. We have four more games, three of them at home. We got to finish as high as we possibly can in our first year."

Meanwhile, Orange County will try to keep a hold of the top seed in the West when it hosts third-place Real Monarchs SLC at Champions Soccer Stadium on Wednesday night.