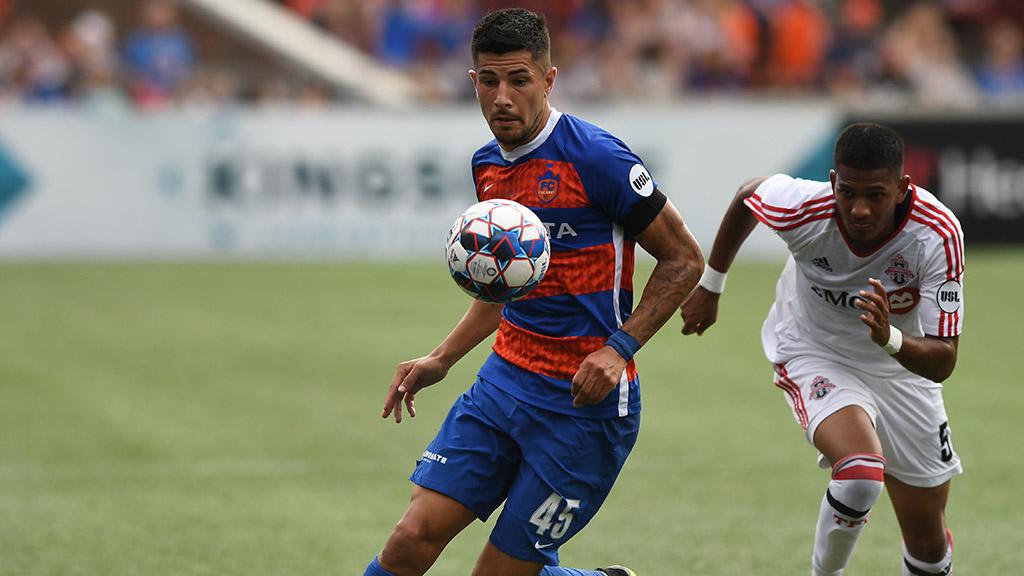 1. Sunday night’s clash between FC Cincinnati and Toronto FC II before a crowd of 27,275 at Nippert Stadium got a pair of standout displays from Emmanuel Ledesma for FCC and Tsubasa Endoh for Toronto, but it was Ledesma and the hosts who ended up coming out on top in a thrilling 4-3 victory that saw both teams hold the lead twice. Endoh’s superb hat trick, which saw him find the net from outside the penalty area on each of his three goals, was the standout performance for the visitors, but the star of the show for the hosts once again was Ledesma, who recorded three assists – including the helper on Corben Bone’s late game-winner – to not only provide his side the chances it needed to hold off a game Toronto side but more significantly make him the USL’s single-season assists record-holder, breaking the tie with Reno 1868 FC’s Chris Wehan (2017) and Pittsburgh Riverhounds SC’s Matt Dallman (2013), each of whom recorded 12 assists in their stellar seasons. Ledesma’s first of the night to Forrest Lasso on what has become a typical sight from set pieces of a perfectly-flighted delivery from the Argentine set the record, and the two after for Fanendo Adi and Bone took him to 15 for the season, well ahead of the chasing pack.

2. Both Orange County SC and the Portland Timbers 2 needed late heroics to pull out victories on the road, but both kept their pursuit of both the postseason and potentially a high finish in the Western Conference on track thanks to goals by Noah Powder for Orange County and Renzo Zambrano for T2. Orange County returned to the top of the Western Conference thanks to Powder’s second goal in as many games as Thomas Enevoldsen set up the Trinidad & Tobago youngster with his ninth assist of the season, which creates a must-see matchup on Wednesday night as Orange County hosts third-place Real Monarchs SLC at Champions Soccer Stadium. Portland, meanwhile, shifted into the top four thanks to its comeback victory against Las Vegas Lights FC that saw Zambrano come through with the winner in an all-action tilt that easily could have finished with more goals than the 2-1 final score in favor of the visitors.

3. There wasn’t a great deal of style to North Carolina FC’s 1-0 victory against Penn FC at FNB Field on Sunday evening, but that really won’t matter much in the long run if it ends up helping the side reach the 2018 USL Cup Playoffs at the end of the regular season. Daniel Rios’ 17th goal was the only official shot on goal of the night for the visitors, and Penn’s finishing also came up short as it only registered two shots on goal, the second a late free kick by Walter Ramirez that NCFC goalkeeper Alex Tambakis dealt with well. With points at a premium for both clubs at this point of the season, NCFC’s move within three points of the playoff positions with five games to go in its regular season is all that will matter moving forward.

LAS VEGAS – The Portland Timbers 2 rallied from an early deficit to take a 2-1 victory against Las Vegas Lights FC at Cashman Field for T2’s third consecutive victory. Las Vegas threatened early on a free kick by Daniel Guzman that was saved by T2 goalkeeper Alex Mangels, but the hosts hit the front in just the fourth minute when Raul Mendiola fired home to the right corner from the left side of the penalty area for his seventh goal of the season. Sammy Ochoa also went close for Lights FC with a lifted finish that went just over the crossbar shortly after, while Portland just missed out on an equalizer on a counterattack following a Las Vegas corner kick that saw T2’s Marvin Loria get in behind the defense but lift his finish just wide of the right post. Loria went close again in the 25th minute as his shot after Las Vegas goalkeeper Ricardo Ferrino had parried a cross spun off the outside of the left post, while Guzman redirected a chance for the hosts just wide of the right post just before the halftime break. The hosts found the net early in the second half through Guzman only for the flag to be raise for offside, while T2 had a big chance to equalize when Foster Langsdorf sent a free header wide of the right post 10 minutes after the break. The teams continued to exchange chances as Ochoa was denied by Mangels as the hosts tried to add to their lead, and Portland again went close as first Adrian Diz Pe was kept out by Ferrino and Modou Jadama then headed just over from a corner kick. T2 finally struck in the 72nd minute when the visitors kept a free kick alive in the attacking third and Diz Pe sent in Victor Arboleda for a strong finish and his seventh goal of the season. Portland then added a second with six minutes to go as Langsdorf and Renzo Zambrano beat the offside trap and got in behind Las Vegas’ defense, allowing Langsdorf to set up Zambrano for his third goal of the season. Las Vegas had one last chance to level in the 89th minute by Rodrigo Inigo, but his effort from outside the penalty area drifted wide as T2 held on for a victory that moved it into the top four in the Western Conference.

USLSoccer.com Man of the Match
Renzo Zambrano, Portland Timbers 2 – Zambrano put in a solid performance in midfield, winning four tackles and 10 of 14 duels, before providing the game-winning goal with six minutes to go.

FRESNO, Calif. – Orange County SC got a late goal to return to the top of the Western Conference standings with a 1-0 win against Fresno FC at Chukchanski Park. Fresno had the first good chance of the game just past the half-hour mark when Bradley Kamdem Fewo fired a low shot wide of the right post from the left side, and the hosts also had an opportunity from a set piece by Juan Pablo Caffa five minutes before the break that Pedro Ribeiro was unable to get enough power behind with his header. Orange County’s Aodhan Quinn had a long-range shot that went just over the crossbar in first-half stoppage time, while Ribeiro also had a long-range effort slide wide of the right post with 20 minutes to go as the Foxes tried to break the deadlock. Orange County almost grabbed the lead with 15 minutes to go as a free kick by Quinn found Walker Hume for a header that came back off the crossbar, but with six minutes to go the visitors finally found a breakthrough as Noah Powder was slid in by Thomas Enevoldsen for a low finish and his second goal in as many games as Orange County moved back on top of the Western Conference standings.

USLSoccer.com Man of the Match
Noah Powder, Orange County SC – Powder produced a calm finish to decide the contest in the final 10 minutes in a hard-fought road victory for the Western Conference leaders.

HARRISBURG, Pa. – North Carolina got an early goal by Daniel Rios to take a 1-0 victory against Penn FC at FNB Field. Penn almost struck in just the third minute as Marco Franco cut inside his marker on a strong run down the right and shot to the far corner, only for NCFC goalkeeper Alex Tambakis to tip his effort over the crossbar. The hosts continued to press the game early, but North Carolina took the lead in the 11th minute when Daniel Rios scored his 17th goal of the season as he split two defenders to gather and fire home a shot to the left corner from the top of the penalty area. Rios found the net again a minute before halftime only for his volleyed finish to be ruled out for offside, while Zach Steinberger went close for the visitors early in the second half as his header from a corner kick went just over the crossbar. Penn’s Paulo Junior sent a shot well high of the crossbar with 14 minutes to go as he cut in from the right side to the top of the penalty area, but the hosts went closest to an equalizer in the first minute of stoppage time when Walter Ramirez low free kick from the right was just turned wide of the left post by Tambakis, allowing North Carolina to hold on for a key road victory.

USLSoccer.com Man of the Match
Wuilito Fernandes, North Carolina FC – Fernandes won eight of 12 duels overall and recorded seven clearances and three interceptions to help hold Penn to only two shots on goal for the game.

10/10 reflexes by Tambakis to secure the win for @NorthCarolinaFC #USL pic.twitter.com/NePEUncvS7

CINCINNATI – Corben Bone scored twice and Emmanuel Ledesma recorded three assists while becoming the USL single-season record holder for helpers in a wild 4-3 victory before 27.275 fans at Nippert Stadium that saw FCC’s undefeated streak stretch to 18 games. Toronto grabbed the lead in the 24th minute when Tsubasa Endoh found space in the left channel and unleashed a shot that found the top-right corner, which ran his scoring streak to three games. Cincinnati hit back seven minutes later, though, as Ledesma recorded his 13th assist of the season on a free kick that was headed home by Forrest Lasso at the top-right corner of the six-yard area. Ledesma almost gave FCC the lead three minutes before halftime as he rang the left post with a curling shot from the top-right corner of the penalty area, but Fanendo Adi put the hosts ahead in the first minute of stoppage time with a clever piece of skill to beat his marker before finishing past advancing TFC II goalkeeper Caleb Patterson-Sewell into the right corner. Toronto immediately hit back as Endoh produced his second long-range strike of the half into the bottom-left corner, and the visitors held onto their lead two minutes into the second half when Patterson-Sewell produced an outstanding save to deny a close-range header by Adi. Endoh completed his hat trick in the 73rd minute with another spectacular finish to the top-right corner from 25 yards to put Toronto back ahead, but FCC again got back on level terms with 12 minutes to go as Bone finished off a lifted through-ball by Jimmy McLaughlin. Bone then put Cincinnati ahead in the 88th minute on his second goal of the night as Ledesma picked up his third assist with a curled cross from the left to the back post that Bone headed in unmarked, providing the final twist to a second compelling contest between the clubs this season.

USLSoccer.com Man of the Match
Emmanuel Ledesma, FC Cincinnati – Ledesma’s trio of assists took him to 15 for the season and in the process set a new single-season mark for helpers in the USL’s modern era.