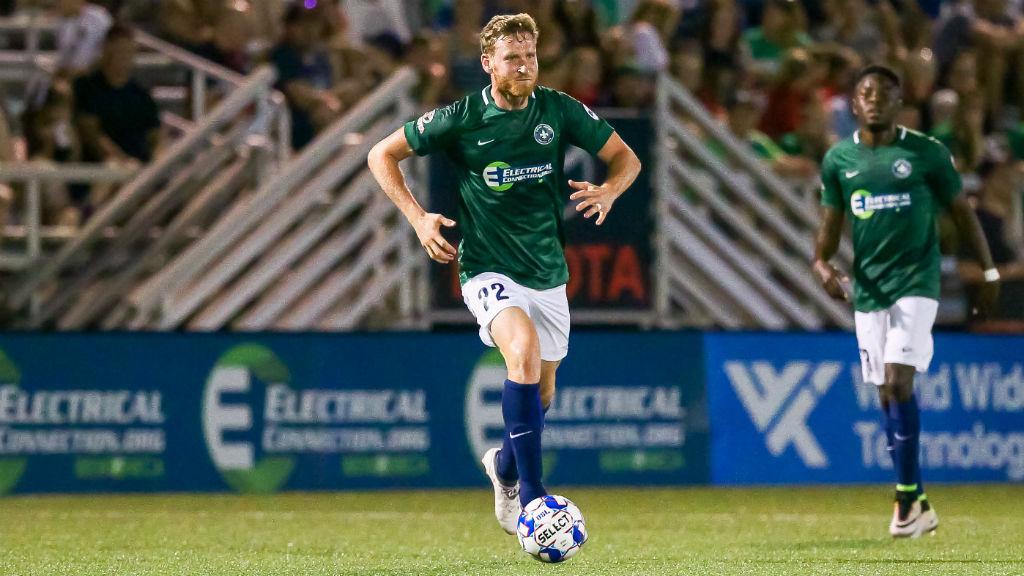 The 28-year-old forward, who has registered 12 goals in 28 appearances this season, will be playing in front of friends and family in a match that is a homecoming of sorts for the Olathe, Kansas native. Greig also played four years of college soccer at nearby Benedictine College and spent a pair of seasons on the former Premier Development League side Kansas City Brass.

“It will be nice to return home and see some family and friends at the game on Saturday,” Greig said. “They are close enough in Kansas City that they often make the drive to St. Louis to watch me play, but going against the local team will mean something extra and it’s a critical game for us as we look at the playoff picture.”

STLFC currently holds the final playoff position in the Western Conference, but can move level on points with sixth-place Swope Park with a victory at Children’s Mercy Park (5 p.m. ET | Match Center | ESPN+). That won’t be an easy task as the hosts have won four straight games, matching their longest winning run of the 2018 season.

Saint Louis took a 2-0 victory against Swope Park in their most recent meeting this season, with the hosts getting goals from Corey Hertzog and Joey Calistri on either side of halftime to earn three points at Toyota Stadium – Saint Louis.

STLFC didn’t have quite the same success holding onto a lead in their last run out as Wal Fall’s ninth-minute goal was cancelled out by Real Monarch SLC’s Jose Hernandez four minutes after halftime to give the two teams a 1-1 draw. That result put Saint Louis under the gun with five games to go in the regular season with ninth-place Reno 1868 FC only a point behind but with two additional games left to play going into this weekend.

“Really frustrating to drop two points from a winning position and to concede such a sloppy goal,” STLFC Head Coach Anthony Pulis said. “But we always thought we’d be able to create opportunities on the break which we did, unfortunately our decision-making or execution in those situations wasn’t good enough tonight to get the second goal. Now we have to recover and get ready for another big game at Swope Park on Saturday.”

TIME FOR A TURNAROUND: After picking up just one win from its last seven matches, Reno 1868 FC opens up a crucial four-game homestand against the LA Galaxy II on Saturday at Greater Nevada Field (10 p.m. ET | Match Center | ESPN+).

1868 FC enters the contest one point behind Saint Louis FC for the final playoff spot in the Western Conference, but has played two fewer games. Reno, which pulled off a convincing 4-1 victory in the clubs’ first meeting this season, will try to close that gap by picking up three points against a team it has never lost to in USL play.

“This is a must-win game,” Reno defender Zach Carroll said. “It’s a team that we had success with earlier in the year. I think if we have the right mentality, it could be a good result for us, one that we need right now.”

The Galaxy II, who currently sit nine points behind the hosts in the West, will try to play spoiler after suffering a 3-1 home loss to OKC Energy FC on Wednesday.

“I was very happy with the first 20-25 minutes [against OKC],” Los Dos Head Coach Mike Munoz said. “I thought it was some of the best soccer that we’ve played all season. We were hoping that we would get that second and third goal to get that kind the chance to stay on top of OKC or put the game away early. We definitely had chances, but then unfortunately one or two plays where we would shut off in transition or we would make a mistake and slowly they were able to gain momentum and get back into the game. And obviously when they scored was right before halftime and put them on top again.”

Rising FC, which had kept four consecutive clean sheets before its 3-2 loss in San Antonio last weekend, hopes to regain that defensive resolve which positioned the club well to compete for the top spot in the Western Conference. That position is something the club is actively seeking as it looks to avenge its penalty shootout loss against Swope Park Rangers in the USL Cup Playoffs last campaign.

“For me to go past the first round of the playoffs, the biggest advantage would be to be playing at home,” Rising FC Head Coach Rick Schantz told Cronkite News’ Ricardo Ávila.

Phoenix hopes to continue to get solid contributions at the back from its MLS loanees Saad Abdul-Salaam (NYCFC) and Tristan Blackmon (LAFC). The duo joined the club a day apart (Aug. 13 and 14) and seamlessly integrated into the squad while playing a vital part in Phoenix’s 405-minute shutout streak.

While that streak finally came to an end when Cyprian Hedrick converted on a corner in SAFC’s home victory, Abdul-Salaam expects his new team to regain its previous form and carry it through the USL Cup Playoffs.

“I don’t see anything else than lifting the trophy,” he said.

MORE WORK TO DO: Despite recording three straight victories, two of which came against top-three sides in the Western Conference, San Antonio FC still has work to do if it wants to earn a spot in the USL Cup Playoffs.

SAFC enters Saturday’s contest against Tulsa Roughnecks FC at ONEOK Field (8 p.m. ET | Match Center | ESPN+) a point clear of ninth-placed Reno and level on points with Saint Louis FC, but are ahead of the Missouri club on goal difference. The visitors will try to match their longest winning run of the season when they begin a busy stretch of the schedule against the bottom side in the West.

“We know it’s going to be a tough week for us with three games in eight days, and right now we need to get as many points as we can regardless of who we play,” SAFC goalkeeper Matthew Cardone said. “We want to come together and make sure we get points out of this trip before we come back home.”

A win over Tulsa and a STLFC victory over Swope Park Rangers would see SAFC go match Swope Park on 46 points ahead of their crunch clash in Kansas City this coming Wednesday.