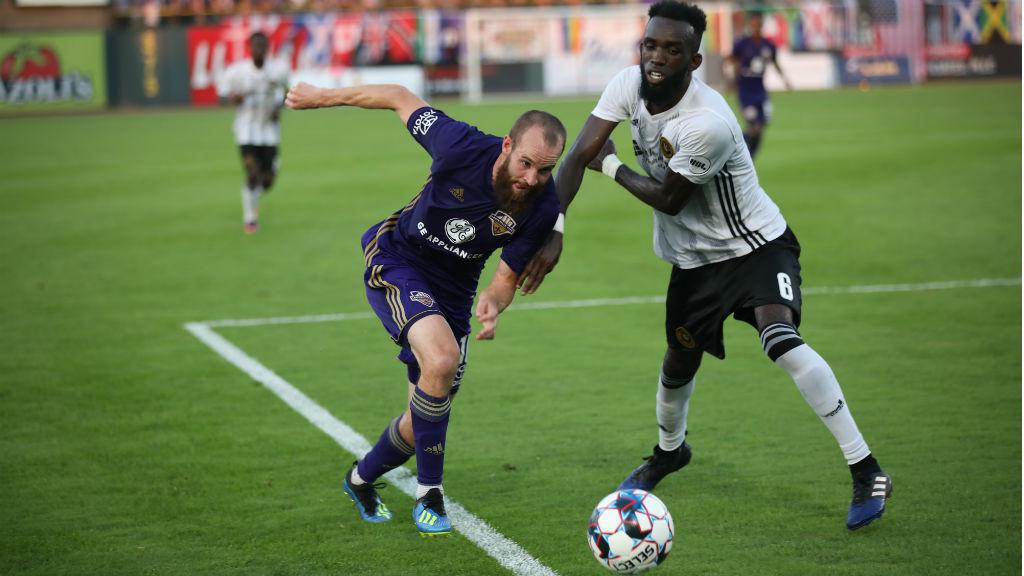 Pittsburgh enters the contest on 49 points, two ahead of fourth-placed Louisville, and can make progress towards securing the second spot in the East and the club’s first ever USL Cup Playoffs home game with a victory.

“We’re in a really good position right now,” Riverhounds SC midfielder Noah Franke said. “We need to hold it so we get a good playoff bid. Staying sharp, staying on top of it, not letting our foot off the gas.”

The Hounds did just that in their impressive 4-1 home victory over Pennsylvania rival Bethlehem Steel FC last Friday, which continued the club’s strong run of form at Highmark Stadium. Pittsburgh is unbeaten in its last five home contests (3-0-2) and has conceded just two goals over that span.

“I’m expecting to go there and have a team that has proven this season to be very tough, especially at home on that field,” Louisville Head Coach John Hackworth said. “We have a huge challenge in front of us. Not only to be on the road but our opponent is well-coached, they are organized, they know exactly how they want to play and they know how to take advantage of their opponents.”

Pittsburgh proved that point in the teams’ first meeting this season when Kenardo Forbes’ 79th-minute goal proved to be the winner in Riverhounds SC’s 1-0 victory at Slugger Field. Despite being held scoreless by the USL’s stingiest defense in their first matchup, LouCity should take some confidence into Saturday’s showdown given their recent run of road wins and past success at Highmark Stadium.

Louisville has scored a remarkable 18 goals in its past four road matches (4-0-0) and has collected 13 points from a possible 15 from five previous matches in Pittsburgh while outscoring the hosts 9-3.

TOO CLOSE FOR COMFORT: Two teams in must-win mode look to separate themselves from each other and move closer to the playoff places in the Eastern Conference when Penn FC and North Carolina FC square off Sunday at FNB Field in Harrisburg (6 p.m. ET | Match Center | ESPN+).

The two team enter the week level on 35 points apiece, just four off the pace of eighth-placed Nashville SC for the final playoff spot in the East with seven games remaining in the regular season. Penn FC defender Kyle Venter expects the game to carry a playoff-like intensity since there is little margin for error for either side at this point of the season.

“I think no matter where you’re at in the table, games at this point mean something to everyone, whether you’re fighting for a spot or locked in,” Venter said. “All the games right now are highly contested, they get heated and you’ve got to be able to take your chances at one end and keep the team out of your net on the other end”.

Penn FC did just the opposite of that in its first meeting with NCFC this season as goals from Austin da Luz, Kyle Bekker and Daniel Rios carried the Carolina club to a convincing 3-0 victory at Sahlen’s Stadium at WakeMed Soccer Park back in April.

NCFC kicks off a pivotal three-game road trip on the back of last weekend’s gut-wrenching 3-3 draw with Nashville in which the team surrendered a two-goal lead in the game’s final ten minutes. NCFC defender Peabo Doue hopes to see his side right the wrongs from last week and improve themselves instead of focusing on the opposition.

“They [Penn FC] have a good team,” Doue said. “They’ve been getting a few results since the last time we played them. The biggest thing for us is to focus on ourselves and give our best effort on both sides of the ball to make sure we get three points. If we do our job, regardless of the team, regardless of how they play, we should come out on top.”

NOW OR NEVER: If the Tampa Bay Rowdies want to hold onto hope of reaching the USL Cup Playoffs for the second straight season, they’ll likely need to pick up three points when they host ATL UTD 2 on Saturday at Al Lang Stadium (7:30 p.m. ET | Match Center | ESPN+).

Tampa Bay has taken just one win from its last five matches (1-3-1) and sits in 13th place in Eastern Conference standings – eight points adrift of Nashville for the final playoff spot – after falling 1-0 against the Charleston Battery last weekend.

“We've got a big week, let's put it that way,” Rowdies midfielder Joe Cole said. “This game is a must-win game. We need to bounce back. This will make or break our season.”

Meanwhile, ATL UTD 2 enters the contest on the back of successive 2-1 away victories against Penn FC and Toronto FC II – its first two road wins of the season. Atlanta is 2-11-3 away from Coolray Field in its inaugural season, but managed a scoreless draw in St. Pete when the two sides met on June 2 in a contest that featured first-half red cards for ATL UTD 2’s Will Crain and Tampa Bay’s Marcel Schäfer.

“The first match was a funny one because there were two reds cards, so it turned into a strange, 10-v-10 game,” ATL UTD 2 Head Coach Scott Donnelly said. “Tampa Bay is a good team. I think they are one of the biggest spenders in the league. They have gone out, since we saw them last, and been really aggressive with some player signings to try and support the guys they had there. I think they are one of the more talented teams in the league. We are wary of them, we are aware of the talent they have and what they can do on any given night.”