INDIANAPOLIS – Facing a New York Red Bulls II side that Indy Eleven Head Coach Martin Rennie called post-game on Wednesday “the best team we played” off the back of their first meeting of the season as the capper to a stretch of seven games in a little over three weeks could have proven a bridge too far for the hosts at Lucas Oil Stadium.

Instead, a resolute defensive display that was buoyed by a pair of early goals from Eugene Starikov helped the Eleven to a 3-0 victory that Rennie considered his side’s best performance of the season so far as Indy moved into the top four in the Eastern Conference while extending its undefeated streak to nine games.

“Overall, it was a great performance from us,” said Rennie. “It was an important game for us. Obviously, we’re very close in the standings so for us to come away with probably our best win of the season is a great time to do it. I think the team’s getting strong.”

Making just his ninth start of the season, Starikov ensured Indy got off to an ideal start with his fourth goal of the season just over 100 seconds into the contest. A looping cross by Dylan Mares from the right set up the chance, with Starikov able to angle his first-time finish into the left corner of the net from the top of the six-yard area.

Starikov’s second goal of the night might have been the key moment of the match, however, as New York quickly bounced back from its early concession and started putting pressure on the Eleven’s goal. A chance in the 19th minute came to Ethan Kutler in space on the right at the top of the penalty area and his powerful shot flashed just wide of the left post with Indy goalkeeper Owain Fôn Williams looking as though he would have been in trouble had he needed to make a save on a more precise finish. 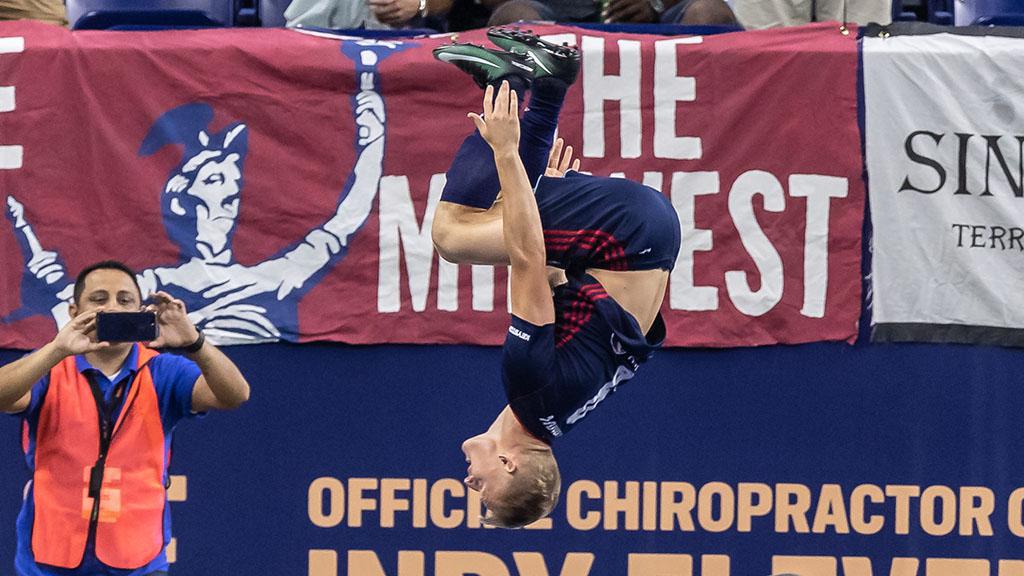 Two minutes later Starikov provided the sort of finish that New York struggled to find over the 90 minutes with lashed left-footed finish from the left side of the penalty area that screamed in at the near post after an inventive chipped through-ball by Matt Watson set up perfectly to be hit first time. The Red Bulls II ended the game with a 26-10 advantage in total shots and a 14-1 edge in corner kicks, but Starikov’s finishing and that of Reiner Ferreira – who added a third with a precise finish from 25 yards just before halftime that tucked into the right corner of the net – made the difference as each side finished with five shots on goal.

“He’s been scoring quite a lot when he’s been available,” said Rennie of Starikov. “Unfortunately, he’s had a few injuries and he was out for a long time. Once we got him back he started scoring and once we got him back he was off for a little bit with a fever that stopped him playing for a couple games. He’s not had that kind of rhythm but showed what he can do and that was clinical for us.”

The Red Bulls II piled on pressure in the second half, outshooting their hosts 18-3, but from Brian White’s shot off the crossbar on the hour-mark to some timely interceptions in the defensive third an Indy backline that recorded 41 clearances, the leading attack in the league was held scoreless as Fôn Williams earned his 10th shutout of the season.

“I think that showed the guys were determined to bounce back from the away game we had against them where we lost some goals and I think everyone did their job really well,” said Rennie. “I think what was important tonight was that we’ve stuck to the game plan and kept doing what we were meant to do even when we were winning.”

Indy will get a seven-day break before its next outing on the road next Wednesday night against Penn FC, a game that certainly figures to be key for the hosts at FNB Field in its pursuit of the postseason and for Indy as it looks to claim a top-four finish ahead of one of Louisville City FC, Pittsburgh Riverhounds SC and the Charleston Battery.

After the arduous run the side has been on over the past month, though, getting rested up for the final run of the regular season is the top priority as the side looks to maintain its rise in level ahead of the postseason.