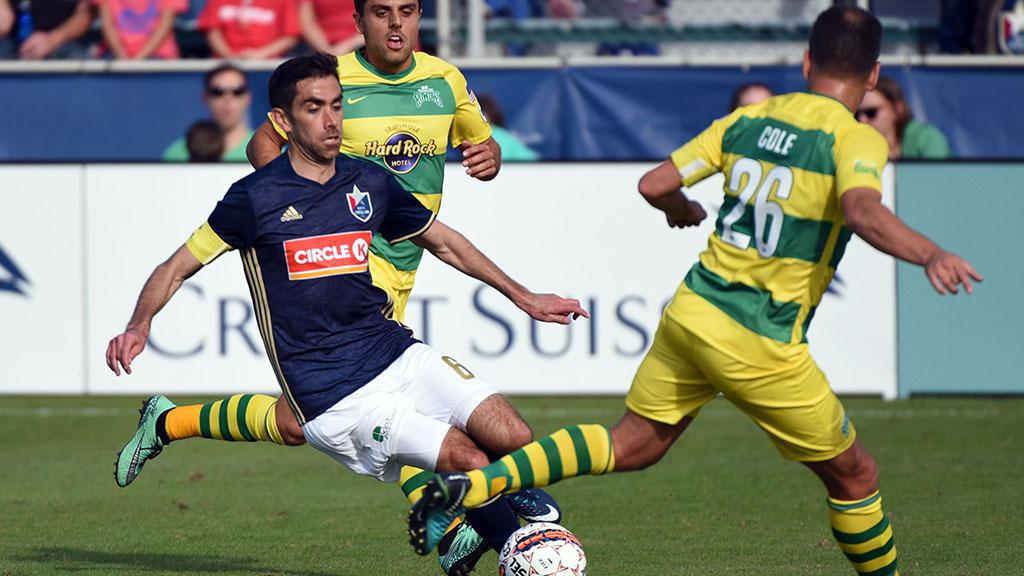 North Carolina FC and the Tampa Bay Rowdies square off for the third and final time on Saturday night with postseason hopes for both on the line. | Photo courtesy Rob Kinnan / North Carolina FC

CARY, N.C. – With both sides sitting below the playoff line in the Eastern Conference, Saturday night’s game between host North Carolina FC and the Tampa Bay Rowdies figures to be pivotal to the postseason hopes for both when they meet at Sahlen’s Stadium at WakeMed Soccer Park (7 p.m. ET | Match Center | ESPN+) for the third and final time in the regular season.

That backdrop is likely to provide an added edge for two clubs that have a long history facing off against each other with three crucial points on the line.

“We’re at the point now where we’re on the cusp of the playoffs,” said NCFC midfielder Graham Smith. “So, every game at this point is a playoff game for us, because if we get three points it could move us up and if we don’t get three points it could really hurt us. So, every game is that same mentality, so both teams are coming into the game realizing that it’s a must-win.”

Of the two, North Carolina is sitting in the better position after a 6-2 romp against the Charlotte Independence last Saturday night on home turf. NCFC got a pair of goals apiece from newcomer Zach Steinberger and leading scorer Daniel Rios in that contest, but still finds itself three points out of the playoff positions with nine games to go in the regular season.

After picking up victory on the road against the Rowdies on August 11 at Al Lang Stadium – a game in which Marcel Kandziora and Rios found the net in the second half – North Carolina isn’t apprehensive about having to square off with its rival again just three weeks later.

“It is unique, playing Tampa again so soon, but I don’t think it matters,” said Kandziora. “Every game is important in our playoff chase. We are approaching each game with the same mentality.”

The Rowdies haven’t been as fortunate of late, suffering a 2-1 defeat to FC Cincinnati last Saturday night on a late penalty kick after a big attacking display against the Eastern Conference-leader at Al Lang Stadium. Sitting six points back of North Carolina and nine points back of the top eight going to start the weekend, a repeat performance of the club’s 3-1 victory on the opening day of the season is likely essential to keep Tampa Bay’s postseason hopes alive.

“The season is coming down to the end and it’s now or never for us,” said Rowdies forward Sebastian Guenzatti. “Hopefully Saturday can be the start of a streak that helps us earn a spot in the playoffs. We’ve been playing well but sometimes the results just don’t go your way. North Carolina are a good side and they are also fighting to secure a spot in the playoffs, so we know we’re both hungry to go out there and get the win. Saturday’s match will be an exciting one to watch for all fans, but also a great one to play in.”

After the frustration the side felt a week ago, the Rowdies have redoubled their efforts to make a final push for a second consecutive trip to the USL Cup Playoffs.

“I’ve told the guys that it’s in the past,” said Tampa Bay Head Coach Neill Collins. “We need to use our energy on Saturday’s match. Inside the locker room we know we have the talent, it’s just about going out there and overcoming everything that is thrown our way and getting the results.”