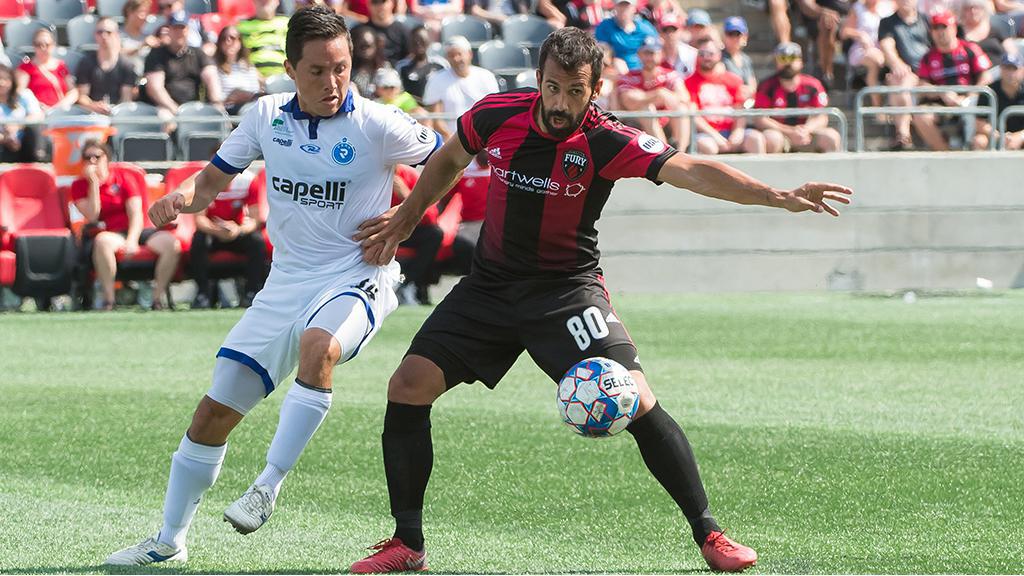 OTTAWA – Ottawa Fury FC knew it was facing a key week in its bid to reach the USL Cup Playoffs ahead of Wednesday evening’s game with Bethlehem Steel FC. After suffering defeat on the road in that contest, however, the pressure is ratcheted up for the visit of another club from the Keystone State with playoff aspirations – Penn FC – at TD Place this Saturday night (7 p.m. ET | Match Center | ESPN+).

Sitting in the eighth and final playoff place going into the weekend, though, the side is still clear-minded as to the task at hand over the final quarter of the season.

“It is definitely in our hands,” said Fury FC captain Carl Haworth. “We’ve done really well to get here, but now it’s about taking care of business and going on the road in sometimes tough situations coming up and hopefully get some points to at least maybe create a bigger gap between ourselves and the ninth- , 10th- , 11th-place teams just to give us some comfort for the last few games.”

If there’s one thing in Ottawa’s favor going into Saturday’s contest it’s that the side has defeated Penn twice previously this season, including a 2-1 win at TD Place on July 14 that saw the side rally back for its lone victory this year after conceding the opening goal. With the side having struggled the majority of the time to earn points when it has gone behind this season, though, the opening goal is likely to be crucial once again.

“I think we have to have hope that we can achieve the playoffs,” said Fury FC Head Coach Nikola Popovic. “We knew since the beginning of the season that it was going to be very, very tight. There are six, seven and if you push tight even eight teams that are looking for four places so it’s going to be a tough run until the last week.”

BUILDING ON THE FOUNDATION: While there was a clear foundation in terms of style of play at Louisville City FC, the arrival of John Hackworth as the club’s new Head Coach has seen the former U.S. U17 National Team Coach try to implement some new ideas to try and freshen things up for the club’s stretch run.

In Wednesday night’s 3-0 victory against the Charlotte Independence, which marked Hackworth’s first win in charge, some of those concepts began to show as Louisville took a resounding victory to move into third place in the Eastern standings. 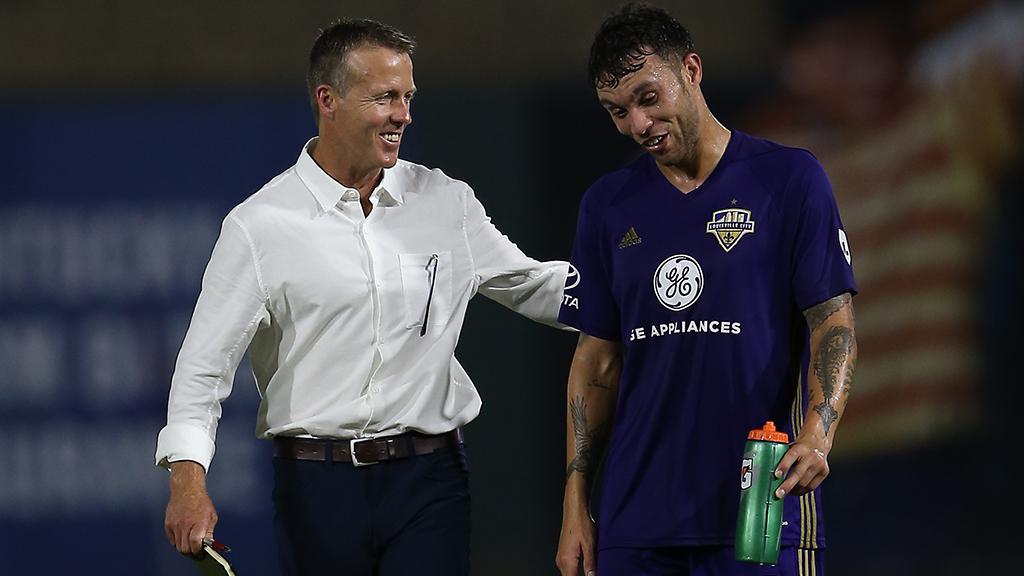 “I’m really proud of this group,” said Hackworth. “Their mentality was great before I got here but it’s not easy for them to deal with some of the changes they’ve gone through. I’m really proud of the way they’ve accepted some points from me and how we’ve collectively worked together to solve some problems and I think you saw that tonight in a pretty comprehensive win.”

Louisville concludes its two-game road trip on Saturday night with a visit to the Richmond Kickers at City Stadium (7 p.m. ET | Match Center | ESPN+) and could see some lineup rotation, but Hackworth is hoping that won’t disrupt things much as the defending USL Cup champions continue their pursuit of FC Cincinnati at the top of the conference.

“The key is that all the guys in the locker room and our training staff do the best job possible of trying to recover and re-gen from this result to be ready for another tough road game after another day of travel,” said Hackworth. “We need the guys who were on the bench tonight to be ready. The guys that didn’t play tonight might have an opportunity and I expressed that in the locker room, so we’ll hopefully get these guys rested and see what we can do about going out and doing the same thing again.”

“We’re preparing to get our guys ready to be in a high-intensity game,” said Anhaeuser. “We have to score goals. Just like Louisville won 6-4, that’s the way you have to play this team. When we went up there it was 5-2, we’re not going to hide from that. We had plenty of chances to score and we didn’t. This time around we need to get off the mark early and we need to be prepared for them.” 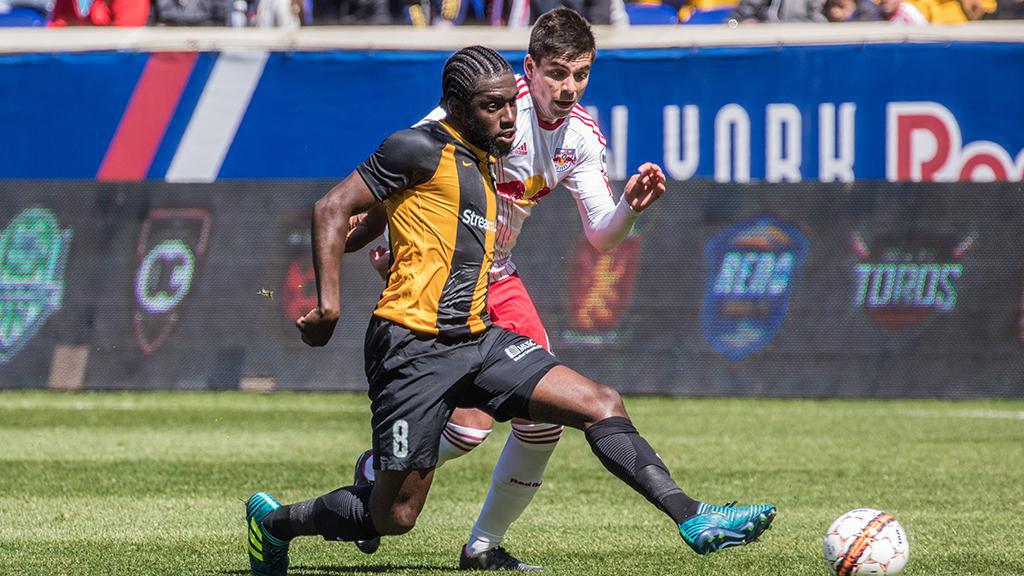 The Red Bulls II have been a tricky proposition for the Battery in recent meetings. In addition to the 5-2 victory New York claimed at Red Bull Arena earlier this season the visitors also claimed a 4-0 win when they last visited MUSC Health Stadium in the Eastern Conference Quarterfinals of the 2017 USL Cup Playoffs. Overall, the Red Bulls II are undefeated in their last five meetings with Charleston, a run the Battery are looking to end.

“I think it’s going to come down to two things really,” said Anhaueser. “One, can we get off to a good start? And two, our decision making as we move the ball forward. If we can get into good positions, we’ll be ok. We created a lot of opportunities in our match up there, but you didn’t see it on the scoreboard. I think we got in good positions. I think we’re going to be able to do that again Saturday night. We need to do it early and I think if we can get the first goal, that’s going to be huge.”

AROUND THE EAST: With 15 goals this season, Louisville City FC forward Cameron Lancaster is one of the leading candidates for the USL Golden Boot, and the English forward is hoping he can top the charts at the end of the season. “It is a personal goal of mine to get the Golden Boot but we still have a lot more games to go and we’ll see what happens,” said Lancaster after his two-goal game in Charlotte on Wednesday. …  There’s no doubt for Penn FC captain Ken Tribbett how big Saturday’s game against Ottawa Fury FC is. “Every game at this point is essentially a playoff game when you look at the standings – where we’re at and the mistakes we’ve made the past few games,” said Tribbett. “We need to turn it around and it starts this weekend.”