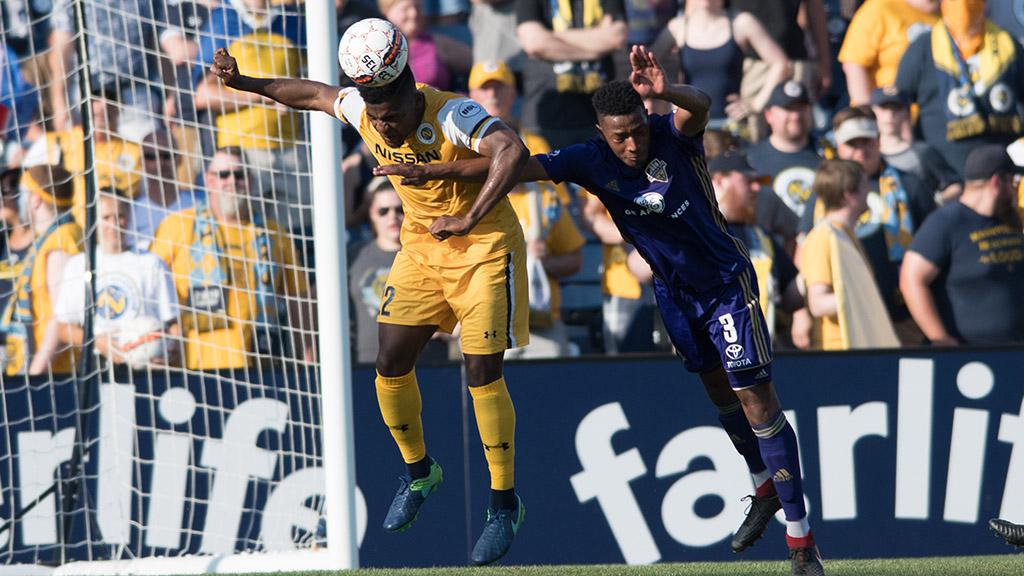 Nashville SC defender Bradley Bourgeois contests a header in Louisville's visit to Nashville on May 13, one of three previous meetings this season ahead of Saturday's game at Slugger Field. | Photo courtesy John Wilkinson III / Nashville SC

NASHVILLE, Tenn. – With the sides squaring off for the fourth time in 2018 on Saturday night, there’s plenty of familiarity for Nashville SC as it heads to face Louisville City FC on Saturday night at Slugger Field (7:30 p.m. ET | Match Center | ESPN+) in one of this weekend’s pivotal contests in the Eastern Conference.

With the two previous regular-season meetings between the clubs being supplemented by the Round of 16 contest in the 2018 Lamar Hunt U.S. Open Cup, there aren’t likely to be many surprises for either side, even with the contest serving as the debut for new Louisville Head Coach John Hackworth.

“I’ve never played a team four times in a season before,” said Nashville defender Bradley Bourgeois. “I think it’s a little bit different for them with adding a new coach, but you really know the guys now. There are no secrets, you can’t really hide and at the end of the day you have to just go to compete. I think it’s all about who wants it more.”

With Nashville having been bumped outside the playoff positions on Thursday night thanks to Bethlehem Steel FC’s victory against Toronto FC II, the contest also serves as an important one to Nashville reestablishing its position both in the top eight in the East but also to its goal of a top-four finish at the end of the season. With a five-point gap to fourth-place Louisville to bridge, evening the series would provide NSC with a big boost toward that goal, and Head Coach Gary Smith is hoping the alterations to the club’s preparations ahead of its second trip to Slugger Field could make a difference this time around.

“I can say is that we’ve prepared a slightly different fashion then we entered the first day of the season,” said Smith. “We’re certainly in a much better place as a group. My players know they’re involved in a rivalry game and in what we hope to be maybe a playoff game at the end of the season. Whatever John and Louisville decide to do we can’t determine. But what we know is that we’re running into a tough team and a tough environment.”

FURY FC FACES ‘DIFFICULT’ INDY: There might be higher-profile contest on Saturday in the USL’s 10-game schedule, but the matinee between Ottawa Fury FC and Indy Eleven at TD Place (2 p.m. ET | Match Center | ESPN+) is a crucial contest for both teams as they fight for position in the Eastern Conference playoff positions.

Both teams are coming off victories on Wednesday night that kept each above the playoff line in the standings going into this weekend’s action, but with a point separating sixth-place Indy and eighth-place Ottawa there’s a lot of pressure to add another win, with Fury FC looking at the contest as one of the toughest it will face down the final stretch. 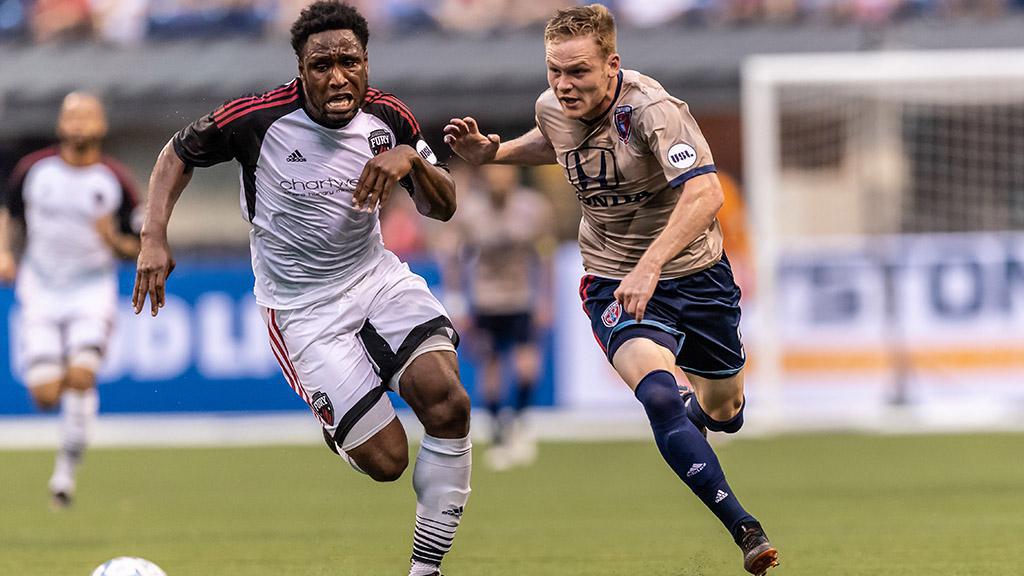 Ottawa Fury FC and Indy Eleven square off for the second time this season in a key battle in the race for the playoffs at TD Place on Saturday. | Photo courtesy Matt Schlotzhauer / Indy Eleven

“It’s a very difficult game,” said Fury FC Head Coach Nikola Popovic. “For me it’s one of the best teams in the league, one of the best rosters, so it’s a very difficult game for us. It’s difficult to have the same approach because we don’t have the same players, and we’re playing a lot of games, so there must be some adaptations because the players are getting a lot of games in their feet. It’s an important game for us, we have to focus to do a very good performance again; only like that we can win the three points.”

Ottawa put together a strong performance in a 2-0 victory against the Richmond Kickers to open its two-game homestand this week which saw it limit its visitors to only one shot on goal as Maxime Crepeau picked up his 11th shutout of the season.

Crepeau recorded a four-save shutout earlier this season to help Fury FC to a 1-0 victory at Lucas Oil Stadium when the teams last met, too, part of a defensive focus that has put Ottawa firmly in the playoff picture.

“I think earlier on this season we kind of switched our game plan a bit to focus on defense and feels like we really solidify things back there, team defense right from the start until the end,” said Fury FC defender Onua Obasi. “And you can’t underestimate Maxime Crépeau, he’s been fantastic for us, he’s made some huge saves in some really tight games.”

With Indy coming off a strong attacking performance in its 3-2 victory against North Carolina FC that saw the side grab a late winner through Juan Guerra, Ottawa’s defensive shape will be key if it is to claim its fifth home victory in the past six games at TD Place.

KIRK STEPS IN FOR HOUNDS: It certainly wasn’t the circumstance Pittsburgh Riverhounds SC goalkeeper Mike Kirk was expecting to make his professional debut under, but as he came on as a substitute late in last Sunday’s game with Bethlehem Steel FC after an injury to starter Dan Lynd, the 24-year-old was as ready as he could be after waiting his chance for the past two seasons.

“I saw Dan [Lynd] go down and first instinct was he okay, how he’s doing,” said Kirk this week. “I took a look over to the bench and saw [Riverhounds SC Goalkeeper Coach] Hunter [Gilstrap] give me the sign to let’s go. We train hard every day, so everything is just instinct.” 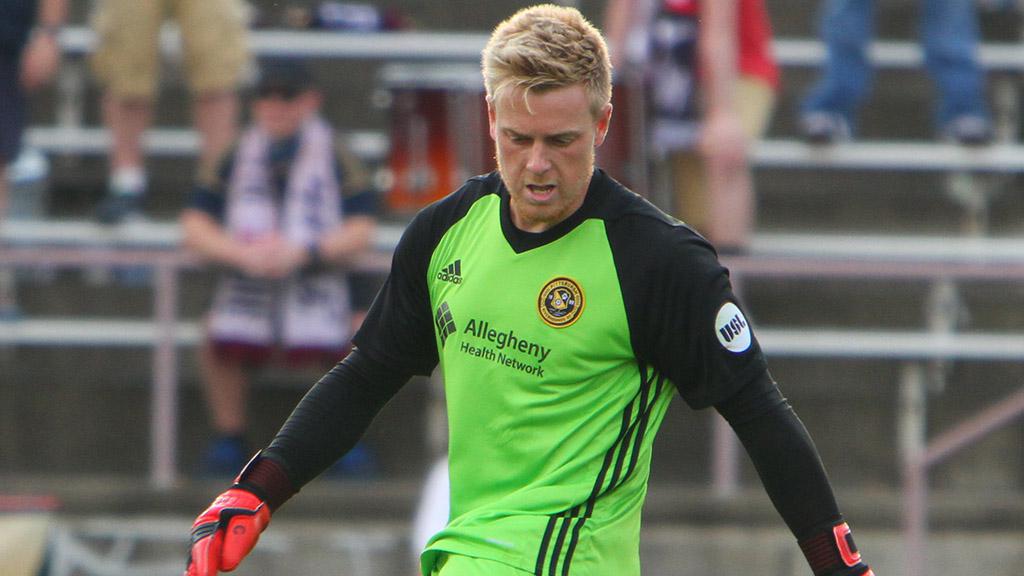 Kirk is likely to get his first start in the professional ranks this Saturday when the Hounds play host to the Charlotte Independence at Highmark Stadium (7 p.m. ET | Match Center | ESPN+) with the club announcing on Thursday that both Lynd and captain Kevin Kerr would be unavailable for the contest. After spending last season as a backup with Rio Grande Valley FC, the former Ocean City Nor’easters shot-stopper is aiming to fit seamlessly into the lineup as the Hounds continue their pursuit of FC Cincinnati at the top of the Eastern Conference.

“We always want to dominate at home,” said Kirk, who appeared in preseason contests for the Hounds before Lynd assumed the No. 1 role for much of the season. “Set the tone, set the pace, so we’re going to go after them. I don’t think anything changes. We’re the same team. We have a deep bench. There’s no change of training, so just take it like another game.”

With Pittsburgh’s propensity for limiting clear sights on goal for opponents, Hounds defender Jordan Dover has little concern a new man starting between the sticks will cause disruption.

“We’re not too worried about the information they’re going to give us because they all train hard in practice,” said Dover. “Typically, we just try to make them feel comfortable. Try to have them face as little shots as possible.”

AROUND THE EAST: The result might not have been the one Penn FC was looking for as its playoff hopes took another hit last Sunday in Cincinnati, but Tommy Heinemann was certainly pleased to get back on the field for the first time since June 12 when he was substituted off against the Richmond Kickers after 17 minutes. “It felt great,” said Heinemann. “For me, it’s been a long stretch out and to be back out on the pitch with the guys is a great feeling. Obviously, it would have been a better feeling to take a result away from Cincinnati, but the group is very focused here and we’re very focused on turning the page.” Penn faces Richmond for the final time this regular season on Saturday at City Stadium.