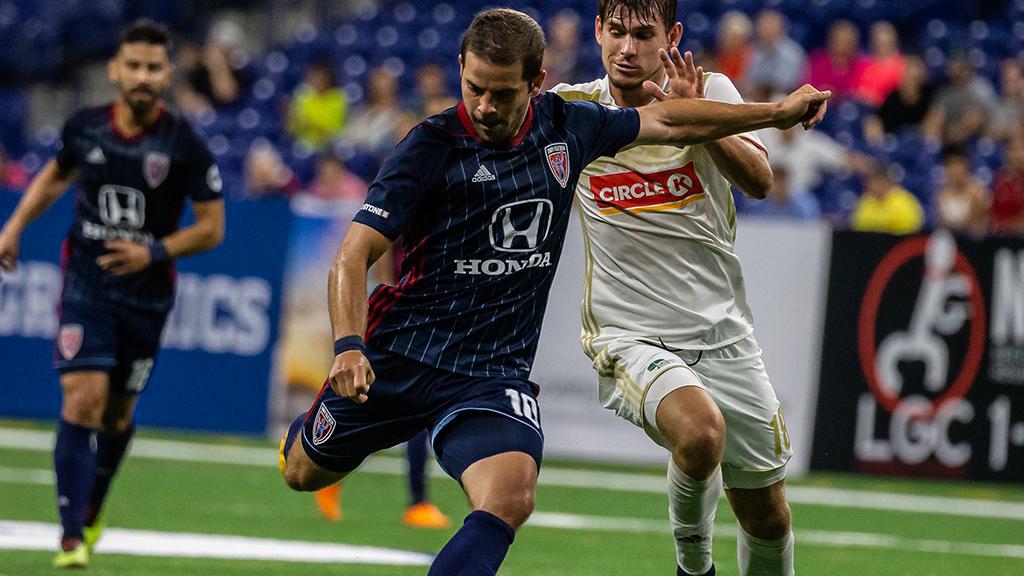 1. Indy Eleven has a busy slate ahead of it in the next three weeks as it makes up its games in hand on the rest of the Eastern Conference playoff contenders, but after a tremendous finish by Ben Speas capped off a good opening half-hour the hosts was on the verge of a disappointing draw until the unlikely figure of Juan Guerra popped up to salvage a big 3-2 victory against North Carolina FC at Lucas Oil Stadium on Wednesday night. Guerra hadn’t found the net so far this season, having only registered one shot on goal in 16 previous appearances, but his timely finish gave Indy a major boost and kept the side in the playoff positions ahead of another big game against Ottawa Fury FC, which also took a 2-0 victory on Wednesday night against the Richmond Kickers, this Saturday at TD Place.

2. After Saturday night’s four-goal display, Orange County SC got another edition of the Enevoldsen and Seaton Show on Wednesday night in a 3-1 victory against Las Vegas Lights FC that moved the side level on points with Real Monarchs SLC at the top of the Western Conference. The two forwards combined beautifully on all three goals for the hosts at Champions Soccer Stadium, Seaton finishing with his second consecutive two goal, one assist night and Enevoldsen notching his league-leading 14th goal of the season as well as two assists, of which he now has eight. Orange County finished first once previously in the Western Conference in 2015, and could push the Monarchs all the way this season if they keep up this pace.

3. Saint Louis FC has used fast starts to power its drive up the Western Conference standings, and that was the case again on Wednesday night as two goals in the opening 10 minutes were enough to earn a 2-1 victory against Sacramento Republic FC and a place in the Western Conference playoff positions at the end of the day. Saint Louis has scored inside the opening five minutes of its last three outings, Corey Hertzog being the player to strike this time around, and has now taken a club-record four consecutive victories ahead of Saturday’s crucial contest with Fresno FC on the west coast.

PORTLAND, Ore. – Orange County SC rallied from a first-half deficit to take a 2-1 victory against San Antonio FC at Providence Park for the club’s second consecutive victory. SAFC opened the scoring just before the half-hour mark as Omar Gordon curled home a free kick from 25 yards into the bottom-left corner, but Portland equalized just before the halftime break when Foster Langsdorf scored his 11th goal of the season with a first-time finish from Lamar Batista’s low cross from the left. T2 almost took the lead two minutes into the second half when San Antonio goalkeeper Matt Cardone produced a fingertip save to keep out a header by Eryk Williamson, but the hosts broke through in the 54th minute when Renzo Zambrano hit a deflected, long-range shot that found the top-right corner of the net. Portland had chances to add to its lead, while T2 goalkeeper Alex Mangels had to make a late save to deny an equalizer to SAFC’s Sonny Guadarrama in stoppage time, but the hosts did enough to earn all three points and take another big step toward the postseason.

USLSoccer.com Man of the Match
Eryk Williamson, Portland Timbers 2 – Williamson completed all 17 of his passes on the night and recorded two key passes to help the hosts to a big victory toward their playoff hopes.

IRVINE, Calif. – Michael Seaton and Thomas Enevoldsen again took center stage as Orange County SC rallied from an early deficit to take a 3-1 victory against Las Vegas Lights FC at Champions Soccer Stadium. Las Vegas took the lead in the 16th minute as Matt Thomas put away his own rebound after his initial header had come off the crossbar, but Orange County turned the game around with two goals in four minutes before the halftime break. Enevoldsen had the first, scoring his league-leading 14th goal of the season with a cool low finish after being released down the right by Seaton in the 26th minute. Roles were reversed three minutes later as Enevoldsen set up Seaton for a low shot to the right corner of the net. Orange County’s Jos Hooiveld almost added a third soon after only to be denied by a big save from Las Vegas goalkeeper Ricardo Ferriño in the 33rd minute, but the hosts were reduced to 10 men in the 56th minute when goalkeeper Andre Rawls was sent off for a handball outside his penalty area. That man-disadvantage didn’t stop Enevoldsen and Seaton from connecting again nine minutes later, however, as a clever 1-2 in the center circle sent Seaton on a breakaway that he converted low to the right corner for his fourth goal in the past two games and ninth overall this season, and while Lights FC had some late pressure as it looked to get back into the game, Orange County saw out the contest to take its third consecutive victory and run its undefeated streak to seven games.

Say hello to the leader in the Race for the Golden Boot. @therealenevolds nets his 14th of the season. #OCvLV pic.twitter.com/UkU5wOPHgG

FENTON, Mo. – A pair of early goals led Saint Louis FC to a 2-1 victory against Sacramento Republic FC at Toyota Stadium – Saint Louis in the USL Game of the Week on ESPN3 as STLFC won a club-record fourth consecutive outing to move into the Western Conference playoff positions. Saint Louis struck twice in the opening seven minutes, with Corey Hertzog opening the scoring just five minutes in as he curled home a finish into the left corner of the net after picking up a defensive giveaway. Kyle Greig added a second two minutes later with a good flicked header from Lewis Hilton’s cross after a short corner kick on the left, the goal Greig’s 45th regular-season tally of his USL career. Saint Louis’ Wal Fall tested Republic FC goalkeeper Josh Cohen six minutes into the second half with a turning shot from the top of the penalty area, but Sacramento pulled a goal back in the 67th minute as Jaime Villarreal scored from close range after a good knock-down header by Jure Matjasic. Republic FC had a chance to level with 15 minutes to go as Cameron Iwasa’s shot from the right side was turned away at the near post by Saint Louis goalkeeper Jake Fenlason, but STLFC held firm late to preserve another three points.

USLSoccer.com Man of the Match
Corey Hertzog, Saint Louis FC – Hertzog struck opportunistically to open the scoring and put in a strong all-around game with three shots on target, two key passes and five out of five duels won.

.@Jaime_V18 pulls one back for Republic FC and it's game on!

INDIANAPOLIS – Juan Guerra’s 90th-minute goal gave Indy Eleven a thrilling 3-2 victory against North Carolina FC at Lucas Oil Stadium, snapping NCFC’s six-game undefeated streak. Indy took the lead in the seventh minute as Eugene Starikov put home a close-range finish from Jack McInerney’s low cross from the right. North Carolina had a big chance to answer in the 21st minute as Marcel Kandziora got a free look just inside the penalty area, but Indy goalkeeper Owain Fôn Williams did enough to slow the effort down before Carlyle Mitchell make a crucial clearance off the goal line to deny the opportunity. The Eleven doubled their lead just past the half-hour mark as Ben Speas sent home a thunderous drive from almost 30 yards just inside the right post, but Kyle Bekker replied for NCFC in first-half stoppage time with an excellent free kick from 22 yards that curled just inside the left post. North Carolina maintained its momentum into the second half, but Indy almost added to its lead as Kevin Venegas launched into a shot that was saved by NCFC goalkeeper Alex Tambakis, the rebound sent wide by McInerney. North Carolina leveled things with 13 minutes to go as Marios Lomis headed home from the center of the penalty area into the right corner of the net, but Indy grabbed victory in the final minute as a blocked shot by Seth Moses off a corner kick deflected to Guerra, who squeezed his shot into the right corner of the net to lift the hosts to all three points.

USLSoccer.com Man of the Match
Juan Guerra, Indy Eleven
– Guerra had a solid game in midfield for Indy, but proved the man of the moment at the death to pull a victory out of the fire for the hosts against their fellow playoff contender.

OTTAWA – Ottawa Fury FC cruised to a 2-0 victory against the Richmond Kickers at TD Place as the hosts scored once in either half for all three points. Carl Haworth gave Fury FC the lead in the eighth minute as the Ottawa captain curled a free kick from 22 yards just inside the left post. The Kickers almost hit back in the 21st minute as a low cross to the top of the six-yard area by Brandon Eaton was sent just high of the crossbar by Heviel Cordoves, but from there Fury FC had the better looks on goal for the remainder of the half, Eddie Edward sending an effort wide five minutes before the break. Richmond had a chance to level with 15 minutes to go as Braeden Troyer curled an effort just wide of the left post, but Ottawa put the game away with six minutes to go as Tony Taylor put home a simple finish after Steevan Dos Santos chased down an errant backpass to move in one-on-one with the goalkeeper before squaring for Taylor to finish.